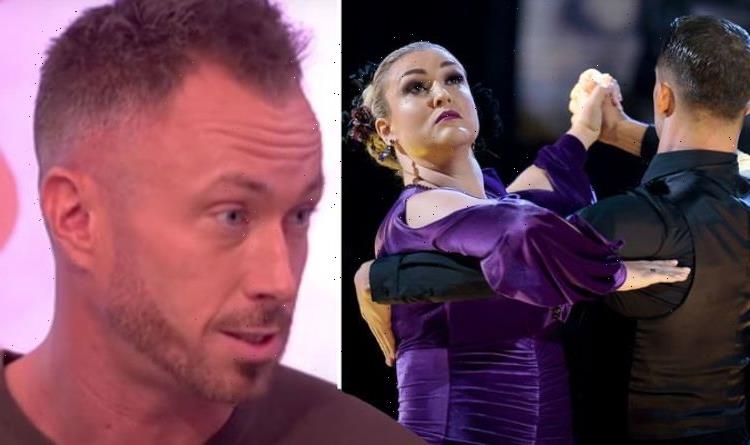 Not one to hold back on his opinion, the dancer said he disagreed with the scoring.

He tweeted: “An epic piece of music but unfortunately not an epic dance

“I loved the routine and the black and white camera work at the beginning but apart from that it was very average.

“She looked like she was struggling to keep up – and bad head position. The music made the dance.”

James went on to say he would’ve given her a seven out of 10 for her efforts.

After learning the judges’ scores, the Dancing on Ice winner took a swipe at the dancing duo.

He commented: “I was clearly watching a different dance.

“I love Aliaz and Sara but she was being dragged round at times.(sic)

“Her Foxtrot was FAR superior.”

The dancer’s comments certainly divided many of his 287,000 followers.

Just Jan wrote: “I have often said it before James I’m no dancer. But surely these marks are all over the place.

“I liked Sara but it was grossly overmarked. Or maybe that’s just me. I do love your comments though.”

Netley Beach added: “I didn’t think it was as good as they said,I thought a little wobble here and there, but there’s no doubt she’s improving week on week.”

Beth penend: “What are the judges on tonight?!!!”

Elle Christoforou commented: “Yes I agree, obviously it looked different in the studio.”

The father-of-one also gave his verdict on the other couples this evening.

The dancer said that while it was a “great show” he didn’t believe there were any “stand out performances”.

He predicted that Greg Davies and Karen Hauer are likely to be the next couple to leave after their Samba routine.

James went on to praise Judi Love and Graziano Di Prima for their performance, adding: “Love them together.”