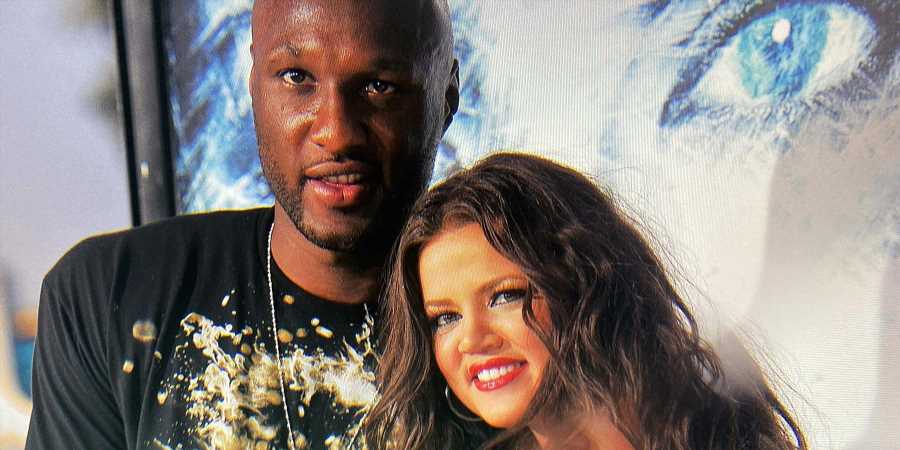 I will live and die on the hill of the whirlwind romance. I'm an optimist and hopeless romantic who so badly wants to believe that you can instantly fall in love, wed on a whim, and live happily ever after, convention be damned.

For some time, Khloé Kardashian and Lamar Odom did just that.

The reality star and then-L.A. Lakers phenom met at the end of August 2009 after hitting it off at a party. Within three weeks, he proposed, and nine days later they got married in a ceremony that fans saw play out in a season four episode of Keeping Up With The Kardashians  called "The Wedding."

The day of the wedding itself, I sat refreshing Perez Hilton's and TMZ's sites to catch pics of the new "it" couple's nuptials. They were all over each other and smiling ear to ear — the bride in a custom Vera Wang dress with a purple sash made to match her bridesmaids, who, after the reception, donned purple velour Juicy tracksuits with "Mr. and Mrs. Odom, September 27, 2009" written on the back in a yellow font, a nod to her then-hubby's team colors. Cheesy? Yes. Unapologetic and showcasing her love in her own thoughtful and meaningful way? That's our Koko, never missing a moment to lead with her heart and just do her. ("You're doing amazing, sweetie!")

Khloé was a cheerleader for her man through and through, and would often be snapped sitting courtside at his home games, her famous fam and friends notably by her side. Seeing that the duo's closest confidants were on board with their quick-to-shoot-and-score relationship made me believe in a saying I always heard uttered but never bore witness to firsthand: "When you know, you know."

At the time, I was in my twenties. I had just started my career as a dating columnist and was dating a relationship blogger. Khloé and Lamar's playful relationship was aspirational not just to me, but to my readers as well. Though Lamar was, at the time, more famous than she was, their relationship had an equal power dynamic. As her family became the most famous in the world, he was still there by her side. I loved that they didn't adhere to the "rules of engagement" so to speak, and that they owned their narrative — something difficult for anyone to do, let alone when fame is involved and everyone is waiting for you to fail. I loved their here-there-and-everywhere PDA, how sex positive they were both in interviews and on-camera (on KUWTK and on their two-season spin-off show: Khloé and Lamar). I loved how she unfailingly cared for her partner, how she'd go above and beyond to give him surprise-and-delight moments, like having her best friend film her posing naked in a bathtub full of sweets while sucking a lollipop and congratulating him on his latest Lakers win.

Her unwavering loyalty acted like a roadmap of the type of woman I'd want to be when I found a Lamar of my own, and it was then I bid adieu to the wife I thought I was supposed to be.

I was raised traditionally. The prescribed storyline for a typical Jewish girl in her twenties is to meet a like-minded professional, date for one to three years, get engaged, then married, and then pop-out babies before the age of 30. But as the youngest of three and a self-proclaimed free-spirit, that box wasn't one I fit into. Yet, it's all I saw happening around me. Siblings, cousins, and friends would partner off and play that role. Another one bites the dust.

Naïve though it might be, my fate seemed predetermined. I let most of my relationships get to the two year mark before admitting to myself that marriage with those partners wasn't for me, and that I should set them free so I could bask in my own freedom on my own whims. I didn't want someone to complete me; I wanted to do the work to be complete on my own, and have someone act as a bonus in my already fulfilled life, should their vibe and goals align with my own.

Seeing Khloé — a celebrity I admired for playing by her own rules — fall in love so hard, so fast, so publicly and with reckless abandon, resonated with me. It was the stepping stone for me to finally be open to choosing partners who also weren't traditional by any sense of the word; who were spontaneous and didn't take life too seriously; who had their own lives but would act as a bonus in mine.

For nine years, I did just that. But in the back of my mind I had continued to fantasize about a love like these two had, despite its shocking and near-tragic end.

Lamar had substance abuse issues and later admitted to cheating on his wife multiple times, something Khloé – ever the protector – tried to keep away from the cameras and the public. But it was bigger than him, and Khloé ultimately filed for divorce in December 2013, after four years of marriage.

Then, in October two years later, papers still unsigned, Lamar had a near-fatal overdose at a Nevada brothel. His estranged wife and the Kardashian-Jenner fam rushed to his bedside where he sat in a coma. She famously called off their divorce so she could help him mend, and my achy, breaky heart hoped they'd reconcile.

Like many who love a good happily-ever-after tale, I hoped the couple would make it work. In February 2016, in his first appearance after he recovered, Lamar showed up to Kanye West's Yeezy season 3 fashion show at Madison Square Garden with the rest of the Kardashian-Jenners. He received an outpouring of support and cheers from fans.

It was a story so surreal and hopeful; that you can make mistakes and recover. That life is in constant flux. But alas, it wasn't in the cards for them. Khloé filed for divorce three months later for the second and final time.

Since then, Khloé famously moved on with a couple partners before hunkering down with her on-again off-again boyfriend Tristan Thompson, with whom she shares 3-year-old daughter True. (According to reports, the couple broke up for good last week.) Lamar went on to propose to Sabrina Parr, but their relationship ended at the end of 2020.

As for me, when I finally stopped looking for the man I was supposed to love, I met my equal. It was love at first sight. We had a whirlwind relationship of our own and decided to commit and be loyal to each other. We talk about the future, we have an unwavering connection and off the charts chemistry. Like Khloé and Lamar, I know we will inevitably weather a few storms. But if it doesn't end up working out, I know it's better to have loved and lost than to never have loved at all.

Breakups That Broke Us is a weekly column about the failed celebrity relationships that convinced us love is dead.