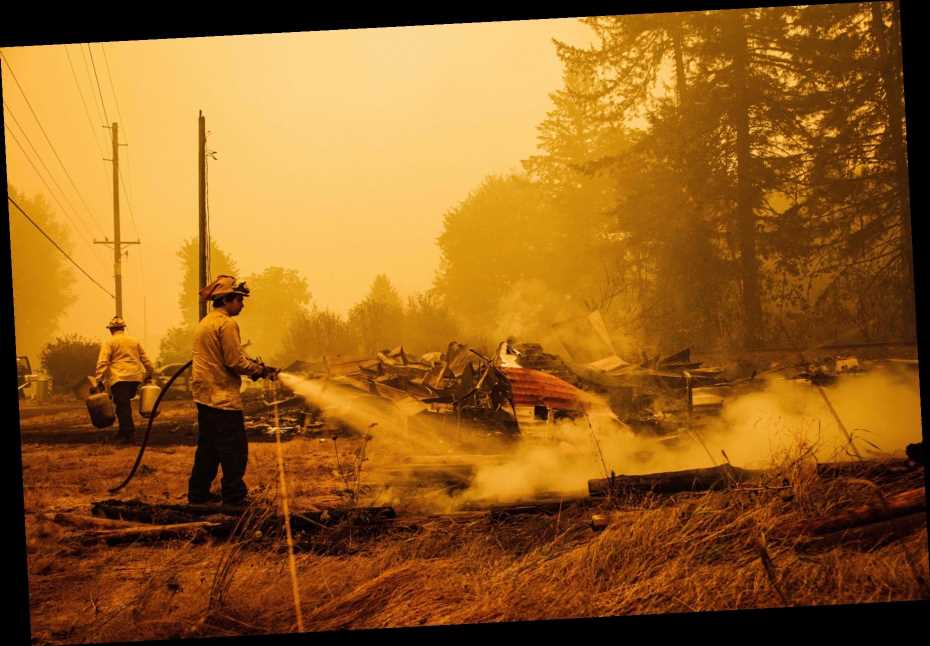 The unfounded rumors that “antifa” are responsible for the wildfires in California and Oregon appears to stem from posts on Twitter and Facebook, alleging that members of a loosely connected network of anti-fascist protesters had come to the small town of Molalla, Oregon to commit arson. They were bolstered by a post from the Molalla Police Department on Wednesday urging individuals in the region to report “suspicious activity” to 911 based on rumors of looting in the area.

The Molalla Police Department later edited the post to clarify that it was not referring to antifa, and BuzzFeed News later reported that the two individuals suspected of being “antifa” were actually photographers who had come to the region to photograph wildfires. Multiple police departments have also refuted the claim, including the Douglas County Sheriff’s Office, which posted on Thursday, “Rumors spread just like wildfire and now our dispatchers and professional staff are being overrun with requests for information and inquiries on an UNTRUE rumor that Antifa members have been arrested for setting fires in Douglas County, Oregon. THIS IS NOT TRUE!”

The FBI has also officially refuted such reports. “There is no indication that the fires are the result of coordinated criminal activity,” FBI spokesperson Beth Anne Steele told the Oregonian. There have also been subsequent reports that armed militants have been on the prowl for “antifa” members.

But that hasn’t stopped various right-wing outlets from regurgitating the misinformation. One of the primary figures circulating the tweet is Katie Daviscourt, a self-described “citizen reporter” associated with Turning Point USA, a pro-Trump organization. On September 9th, she tweeted: “Multiple sources in Emergency Response have confirmed that the fires along the West Coast are caused by dozens of arsonists.” That tweet went viral, racking up thousands of shares. Paul Romero, a former Oregon congressional candidate, has also been responsible for promoting the false claim, suggesting in a series of tweets that “the Fascist Marxists of ANTIFA” are responsible for the wildfires.

Both Romero (who is verified on Twitter) and Daviscourt have continued to push the claim. “I’m not going to stop reporting on the West Coast ARSONS. Despite all of the death threats. Send me everything you got! #ArsonExposed,” Daviscourt tweeted on Thursday.

The claims also continue to circulate among right-wing groups on Facebook, despite the platform’s policy to label confirmed misinformation. One viral post from the outlet Law Enforcement Today claiming the wildfires are part of a “coordinated and planned” attack has received nearly 2500 reactions and more than 4500 shares. Although the story itself has been updated to include the statement from the Douglas County Sheriff’s Office, the post is not labeled as misinformation. Neither Facebook nor Twitter immediately responded to requests for comment.

Antifa has long served as a scapegoat for the right, particularly in light of BLM protests against the death of George Floyd, which have been overwhelmingly peaceful but have prompted thinly sourced reports of rampant violence and crime. This narrative has been pushed by President Trump, who in May announced the United States would designate antifa as a terrorist organization.