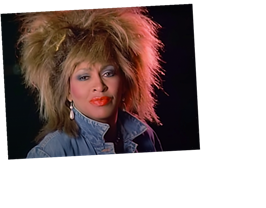 Tina Turner is a music icon who has given the world decades of hits and a timeless story of persevering through life’s most challenging times. The “What’s Love Got to Do With It” singer is known for many things, not the least of which is her big hair and her fancy footwork in heels on stage.

Tina Turner has had a life filled with highs and lows

Turner first got her start as a young singer named Anna Mae Bullock. As a teenager, she saw Ike Turner perform with his band at nightclubs in St. Louis, Missouri. She soon started to sing with his band, and not long after, Ike and Tina struck up a relationship.

The two got married in 1962 and began performing as the Ike & Tina Turner Revue. They achieved success throughout the 1960s and early ’70s, and even got to tour with legendary acts such as The Rolling Stones.

Tina knew there were red flags early in her relationship before they even got married; when she told Ike she wanted to break up, for example, he hit her in the head with a wooden shoe stretcher. Throughout their 14-year marriage, Ike was physically and verbally abusive toward Tina and was an unfaithful husband to his wife.

Tina had released solo albums in the later days of their marriage, but it wasn’t until her smash 1984 album Private Dancer that she proved she was a phoenix who had risen from the ashes.

With such a tumultuous life in addition to an illustrious career, it’s no surprise that Turner’s story has been told on screen in the past. Most notably, Angela Bassett captured the essence of Turner in the 1993 biopic What’s Love Got to Do With It. The movie was based on Turner’s autobiography I, Tina, where she first told her story in her own words.

The latest — and probably final — look into Turner’s life on screen is the HBO documentary Tina, released in March 2021. The movie contains footage from throughout Turner’s life and chronicles her rise alongside Ike Turner and her eventual solo stardom, as well as interviews with the Queen of Rock ‘n’ Roll herself.

Throughout her many successful years as a solo artist, Turner became known for having big hair, not unlike many of the people in the glam bands of the ’80s. She also was known for her larger-than-life stage presence, often characterized by the quick steps that she took across the stage; she famously worked with Bassett to help her get the technique down right for the What’s Love Got to Do With It movie.

According to an interview Turner did with England’s Gazette newspaper, she stands at 5 feet, 4 inches tall. “I’ve been that all my life,” she said. “I’ve been about seven pounds heavier in the early days, but that’s about it.”