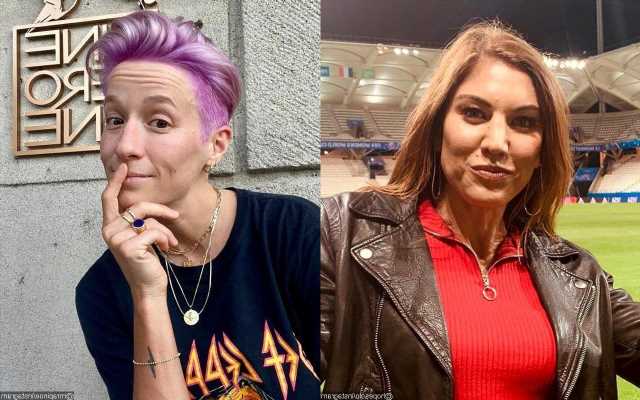 In a new interview, the former U.S. Women’s National Team soccer star describes ‘kneeling’ as ‘very divisive’ and says that there should be ‘no national anthem right before the game.’

AceShowbiz –Hope Solo has claimed that Megan Rapinoe “almost” bullied her teammates. In a candid interview, the former U.S. Women’s National Team soccer player accused her former teammate, who recently became the new face of Victoria’s Secret, of forcing her own squad into kneeling for the national anthem.

During a podcast interview with Goal on “All of US: The U.S. Women’s Soccer Show”, Hope divulged, “I’ve seen Megan Rapinoe almost bully players into kneeling because she really wants to stand up for something in her particular way.” Sharing her thoughts on Megan’s act, the former goalie went on to add that “it’s our right as Americans to do it in whatever way we’re comfortable with.”

Hope went on to share what she thinks about kneeling. She said, “Right now what I’ve seen is there’s been so much debate about the kneeling, about the not kneeling. I know most people stand against discrimination.” She noted that though she “obviously” has friends on both sides of the aisle, she believes kneeling “can be very divisive.”

“I do appreciate the fact that there’s no national anthem right before the game. To really remove that decision from athletes,” Hope admitted. She then reasoned, “Because that’s very tough, it’s tough.”

Elsewhere in the interview, the 40-year-old athlete admitted that there’s “a lot of pressure” on athletes and many feel they are “carrying the world on their back.” She explained, “I think that’s really hard being on the main stage right now with so many political issues for athletes. There’s a lot of pressure, and ultimately at the end of the day, our number one focus should and has always been to win first.”

This isn’t the first time Hope has vocalized her complaints about Megan. Earlier this year, she criticized her former teammate for leading the team into a collective bargaining deal that resulted in the athletes receiving less than their male counterparts.

“We were so close to achieving equal pay in 2016, it was offered to us, we were about to sign the contract with the Equal Employment Opportunity Commission (EEOC),” she claimed. “But Megan Rapinoe and the leaders of that team signed a less-than-equal CBA, which is concerning for the overall class-action suit and the overall fight.”