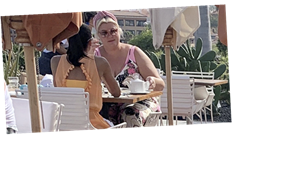 "Heartbroken" Gemma Collins went for breakfast with a friend days before sharing her shocking argument with her now ex-boyfriend James Argent.

The 39-year-old was spotted tucking into a full English breakfast with her friend at a hotel in Tenerife on Friday, 10 July.

However, just a couple of days later everything turned sour when Gemma reportedly decided to end her relationship because Arg had told her he wanted to move to Spain and to have an open relationship.

On Tuesday, 14 July, Gemma shared a string of text messages between herself and Arg online.

Writing over a screen grab of a WhatsApp conversation, in which an unknown sender sent her two pig emojis, Gemma wrote: "Hey guys as you can imagine I am absolutely heartbroken right now shocked totally in pain and can't be pretending I'm all smiles over the gram.

"I am so upset and devastated and hurt, I need some time off the gram to heal."

The reality TV star then went on to share more of the couple's row on her Instagram Stories.

Arg, 32, cruelly branded his girlfriend a "hippo" and a "fat f**k", after she suggested that he had bought another woman dinner and not her.

Gemma begins the conversation by saying: “What man pays for another woman!!!”, to which Arg responds: “Insensitive.”

Gemma then replies with: “And the woman that saved your life has to pay for herself!!!”

The star’s next reply to Arg is not visible, before he writes back: “You are supposed to be treating me you hippo.”

Moments later Gemma shared another series of messages, where her ex sent her a plane emoji in reply to a picture of flight details.

Gemma responded by saying: "I'll take a mate, I'm not booking it. You said you would be a gentleman!"

It comes after reports that the pair split because Arg wants "an open relationship".

James reportedly told Gemma that he wanted an open relationship like actor Will Smith and his wife Jada Pinkett Smith, who recently opened up on being intimate with other people during their marriage.

Sources close to the couple told The Sun Online that Gemma is devastated, especially given she's recently lost three stone on the recommendation of her doctor to get herself in the best possible shape so that she can have a baby.