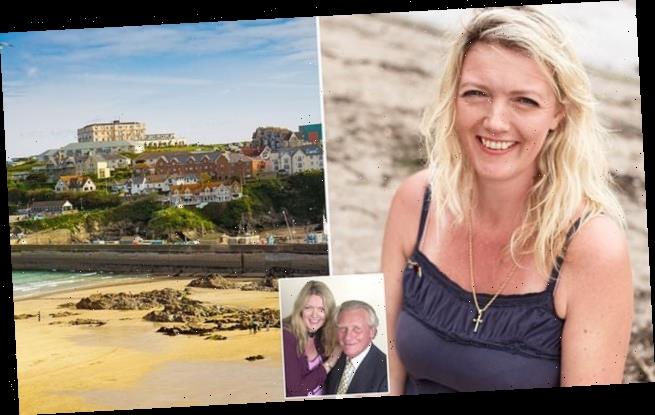 Her father, who nearly became prime minister, has amassed a fortune of nearly £300million and lives in splendour at his 800-acre Northamptonshire estate.

But that doesn’t mean Lord Heseltine’s elder daughter, Annabel, is invulnerable to the sort of holiday horror that induces cold sweat and fist-clenching fury — and leaves the victim begging for help.

As a divorced, single mother who’d spent months locked down with her four children, magazine editor Annabel wanted to treat them to a week in Cornwall before they returned to school. 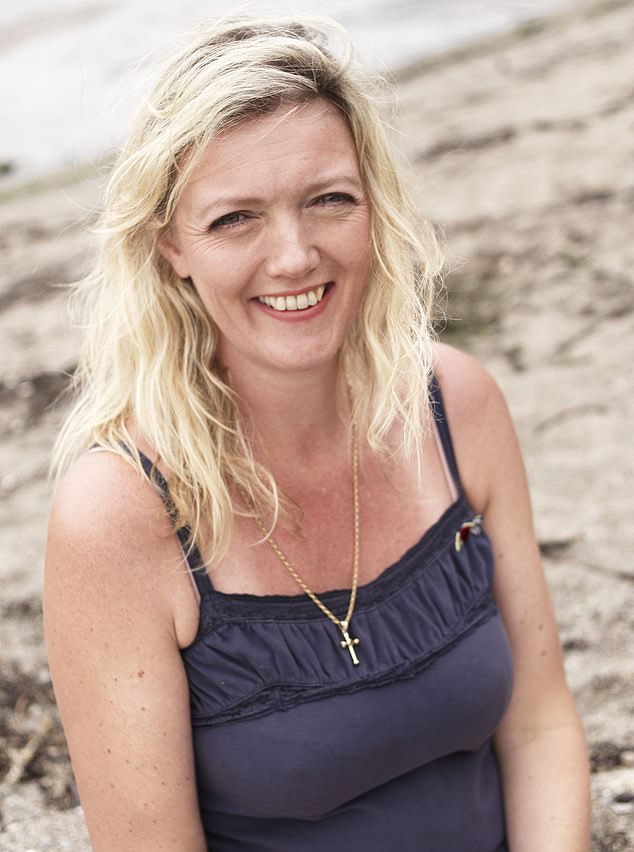 Lord Heseltine’s elder daughter, magazine editor Annabel, wanted to treat her four children to a week in Cornwall before they returned to school

She was delighted when she found what she wanted — a beautiful house overlooking the beach in Newquay.

‘I thought, “How fabulous, how lucky — perfect for teenagers”,’ says Annabel, adding that her youngest child, Montgomery, has been unwell and off school for an entire year.

There was just one drawback. ‘It was very expensive — more than £3,000 for the week,’ she tells me, adding that she told the owner, who gave his name as Henry McGee, she was going to think about it.

‘He pushed me quite hard,’ recalls Annabel, who then had about ten emails from McGee and lettings agency HomeAway as she sought further information.

‘I was desperate to take the children away,’ adds Annabel, whose marriage to surgeon Peter Butler ended in divorce two years ago.

The night before she and the children were due to go, she contacted HomeAway again. ‘I was asking about the keys. They asked for the house ID.’ Only then did she realise that she’d been scammed. 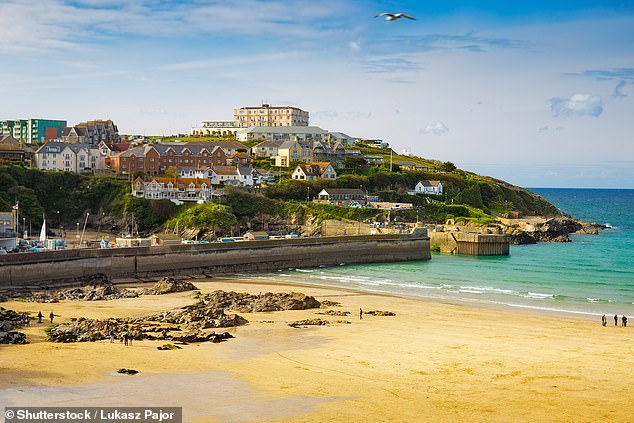 Annabel found a house overlooking the beach in Newquay, but it was more than £3,000 for the week. She negotiated the owner, who gave his name as Henry McGee, down to £2,500 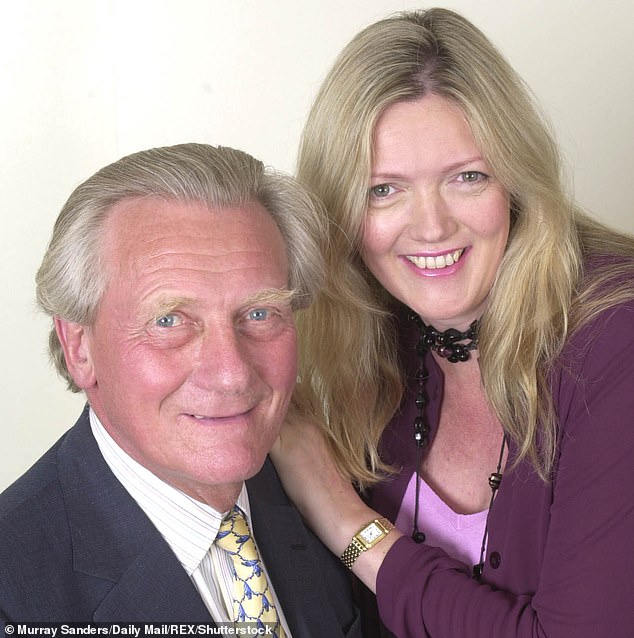 The night before they were due to go, Annabel (pictured with her father Michael) contacted HomeAway again, who asked for the house ID. She then realised she’d been scammed

‘I feel a complete fool,’ says Annabel, who wants to alert others about the sophisticated fraud which made it appear everything was conducted through the HomeAway website.

‘The house was in the line-up with all the others which are kosher,’ Annabel explains. ‘There were 24 photos of the house on the HomeAway site. These have now vanished.’

HomeAway tells me this is a so-called ‘re-direct scam’, in which a criminal ‘illegally used the HomeAway name, design and credibility’ to give the impression that the property was listed on the genuine site.

It’s no consolation for Heseltine. ‘I told McGee how excited we were, and that my teenagers had had a difficult summer and how important this holiday was for us.’

Ticked off by a gendarme for wearing a visor rather than a face mask in the South of France, Dame Joan Collins has found a chic way to comply with the law.

The Dynasty star shows off a covering that matches her dress. 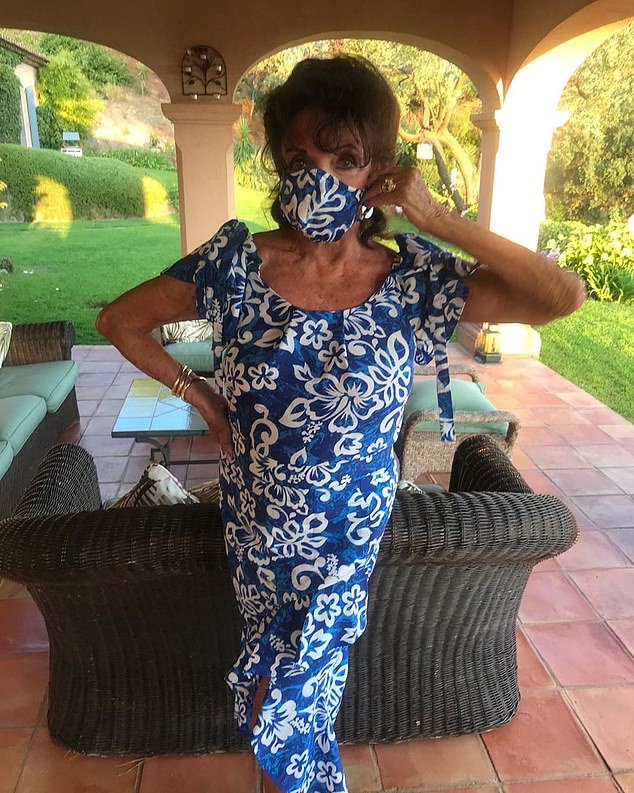 Praising her couturist, Joanie says: ‘Thank you Jackie Palmer, even though I said I would never wear a matching mask.’

Of her brush with the law, she said: ‘Gesticulating in Gallic fashion, he yelled at me to put on a proper mask.

‘Chastised, I slunk away, muttering an Anglo-Saxon expletive under my breath, which, as he glared at me, I fear he might have understood.’

The BBC’s decision to perform Rule Britannia without the words at the Last Night of the Proms has enraged many people, but it’s thrilled author Alec Marsh, whose detective novel just happens to be called Rule Britannia.

‘I’m delighted to say the brouhaha has prompted a small spike in sales,’ boasts Marsh, editor-at-large of Spear’s magazine. ‘When I gave it that title I worried it might be too boring.’

Ellie puts on an exhibition for V&A gig

Pop star Ellie Goulding may have lacked a live audience this week when she gave her first performance of the year, but she made sure she came back with a bang.

She wore a red cut-out bra, matching hot pants and a long, scarlet coat as she arrived at the Victoria & Albert Museum in London. 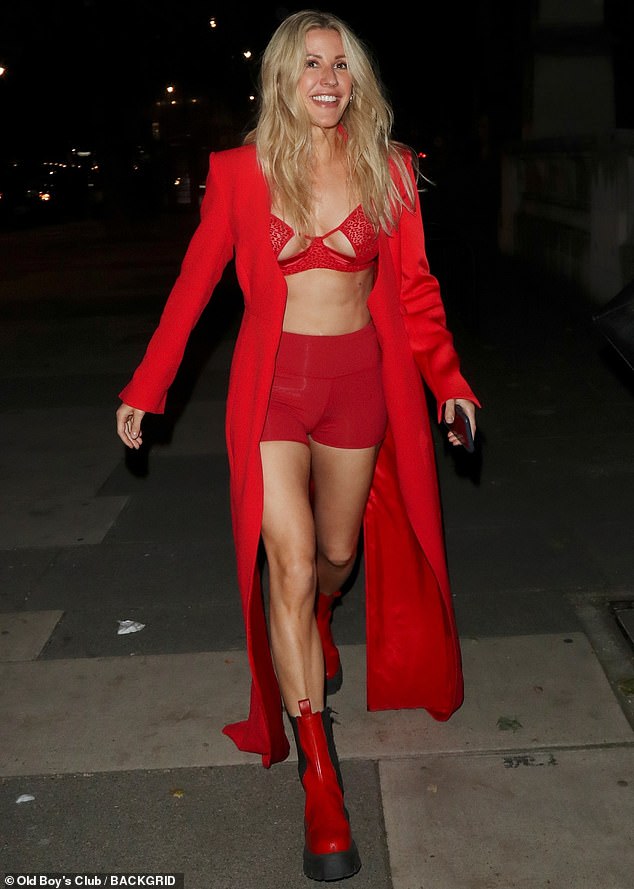 Pop star Ellie Goulding, 33, may have lacked a live audience this week when she gave her first performance of the year, but she made sure she came back with a bang 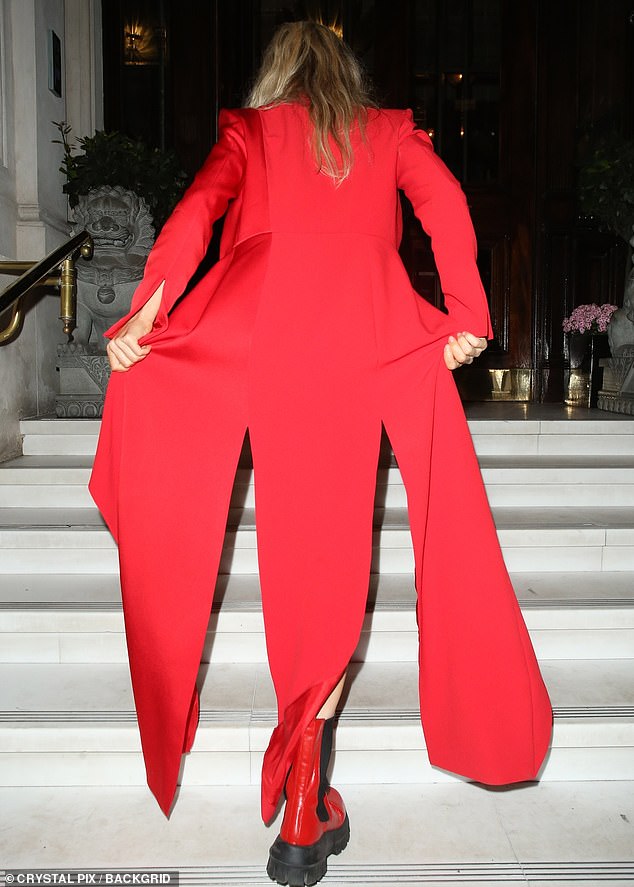 She wore a red cut-out bra, matching hot pants and a long, scarlet coat as she arrived at the Victoria & Albert Museum in London

Her fans paid to watch the show online as Ellie, 33, who sang at Duke and Duchess of Cambridge’s 2011 wedding reception, isn’t touring due to social-distancing rules.

My family star Robert Lindsay admits social distancing from fans can be tricky.

‘The other day, I took the dogs for a walk,’ the actor says.

‘I’m absolutely paranoid about talking to people, or getting close to people — especially joggers or cyclists. But this woman came running towards me and said: “Oh, hello! It’s you! It’s you! You’re in that, erm… oh, what’s the programme…”

Finance guru Soros is still on the ball

He celebrated his 90th birthday this month, but former hedge fund king George Soros displays little sign of running out of steam.

The billionaire looked in outstanding shape as he lined up a forehand drive in the U.S.

‘He plays three times a week,’ a friend tells me. 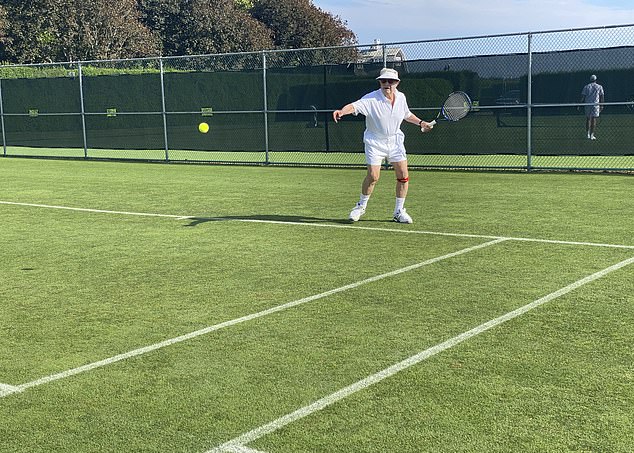 Former hedge fund king George Soros celebrated his 90th birthday this month, but the billionaire looked in outstanding shape as he lined up a forehand drive

Perhaps he owes his vigour to his third wife, 48-year-old pharmacist and entrepreneur Tamiko Bolton.

Prior to their marriage, she founded a successful business selling vitamins and dietary supplements.

Holidays have proved anything but relaxing for style queen Susannah Constantine, who ended up covered in blood after falling over during a cross-country run while staying in the West Country.

‘I was just running fast downhill and I tripped on a root and went flying,’ she tells me. Former What Not To Wear host Susannah had to be taken to A&E with a chipped knee cap and gashed elbow.

‘It was my own fault. I’m very accident-prone and it’s always a bit hazardous — especially for someone who is a bit uncoordinated like me.’