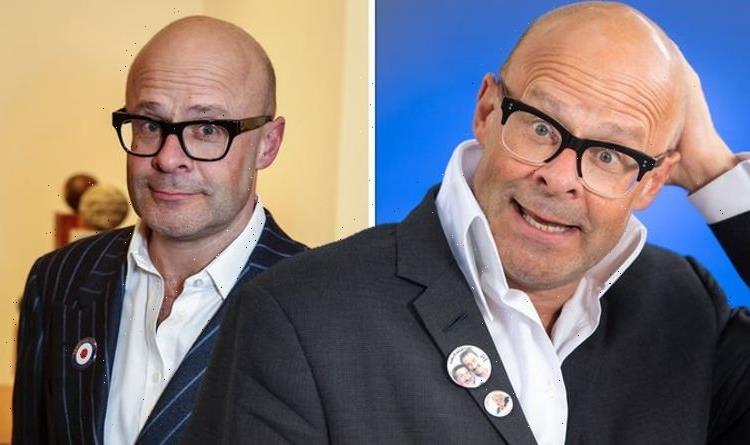 The 57-year-old was accidentally catapulted into the medical world after a passing fancy for making explosions with a chemistry set and, egged on by his “thrilled” mother, this “morphed” into a career in medicine.

His A-level science teachers, on the other hand, hadn’t been so sure.

“My physics teacher had shaken his head and told my parents that there was ‘absolutely no chance’ of me getting a good enough grade to do medicine, and suggested I should consider chiropody instead,” a horrified Harry had recalled.

“I was quite certain that I didn’t want to spend my days fiddling with other people’s feet!”

An alarmed Harry poured his efforts into his exams and, determined to prove his tutor wrong, became a doctor “out of spite”.

Yet the self-confessed daydreamer would write comedy sketches in his spare time, including one where “a shark had somehow got into the operating theatre because it had ‘smelt blood’.”

Plus his focus as a new doctor was not quite as competent as his bosses might have hoped.

“Within my first couple of days on a general hospital ward, I had diagnosed a heart attack in a perfectly normal woman, and was told off for daydreaming while observing an aortic aneurysm operation,” he recalled.

Then a patient who arrived to get lumps removed from his groin got more than he’d bargained for when Harry accidentally recommended him for castration.

“‘I’m sure it’s all fine, Doctor,’ he said, looking up. ‘But just one thing. What is a bilateral orchidectomy?’”

“‘Eh?’ I said, snatching the consent form back off him.”

“Sure enough, in addition to hernias he was down to have his balls off – good job he spotted it, really.”

Somehow he was promoted to medical senior house officer – and the pressure was on to race down to the operating theatre each time a patient’s heart failed.

Harry has shared insight into his life in his new memoir called Fight!: Thirty Years Not Quite at the Top.

This features the comedian’s life from his childhood in Kent to his time as a junior doctor.

The synopsis of the new book reads: “From a childhood spent making smoke bombs, killing wasps and carving soap in 70s Kent, Harry Hill then found himself in charge of hundreds of sick people as a junior doctor.

“Out of his depth and terrified, he chucked it all in to pursue his dream of becoming a stand-up comedian.

“Battling his way through the 90s Comedy circuit he quickly rose to become a household name and one of the UK’s most celebrated comics, almost making it to the top of the showbiz tree…”

Yet it was the career Harry preferred – and fans can read all about his shift from the operating theatre to the stage in his latest book.

Fight! is published by Hodder on November 11 and costs £20.