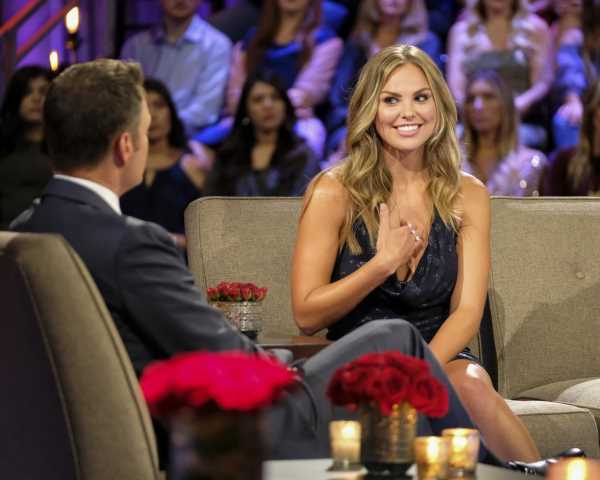 Your mom is often your top supporter no matter what you’re experiencing in life, and Bachelorette Hannah Brown’s mother is no exception. Susanne Brown has posted Instagram pictures supporting her daughter throughout her journey to find love, but in Hannah’s eyes, she apparently took a step too far after the "Men Tell All" special aired on July 22. Hannah’s mom’s Instagram about Luke P. has Bachelorette fans dying of laughter, because honestly, whose mom hasn’t pulled a social media faux pas?

July 22’s "Men Tell All" special began with Luke P. crashing the rose ceremony in Greece after Hannah eliminated him on their date. Hannah had sent Luke packing because he shamed her about having sex during fantasy suite dates, which caused her to come to terms with the manipulative nature his fellow contestants had been talking about all season. After Luke refused to back away from the rose ceremony, Hannah was forced to look him in the eye and confirm she no longer had feelings for him. The Luke P. show continued when he later sat in the "Men Tell All" studio with Chris Harrison to try to explain his actions on The Bachelorette.

Luke’s time in the hot seat wasn’t exactly a success, as the show portrayed him as being generally unresponsive to other contestants’ critique. It looks like his demeanor inspired Hannah’s mother Susanne to apparently post an Instagram of Luke alongside a caption that voiced her opinion about her daughter’s former suitor. The post has since been deleted, but the account Comments By Celebs captured the post and Hannah’s response to it.

In the comments, Hannah reportedly said, "Mother. Delete. And never use social media again. I love you though (and you’re right)."

Who can’t relate to having to intervene in their mother’s social media habits? At least Hannah knows her mom has her back, and after watching this Luke fiasco, plenty of fans agree with the hot take. However, Hannah was probably right to tell Mama Brown to remove such a fiery post. You never know which way Bachelor Nation will turn, so it’s best to keep the unfiltered comments within the family group chat. Plus, Hannah’s responses to Luke on "Men Tell All" were strong enough to speak for the whole Brown family.

During the episode, Hannah even apologized directly to viewers for keeping Luke in the competition for so long. "Bachelor Nation, I am sorry," she said. "I am sorry for this whole thing with Luke and him just being on our television screens for so long, way longer than really any of us ever desired. It’s my fault — a lot his, but I did it."

Hannah’s mom also probably has a lot of thoughts about The Bachelorette‘s remaining men, but after this Luke post, it looks like she might be keeping her clapbacks to herself. Season 15 of The Bachelorette concludes with a two-night finale at 8 p.m. ET on Monday, July 29, and Tuesday, July 30, on ABC.