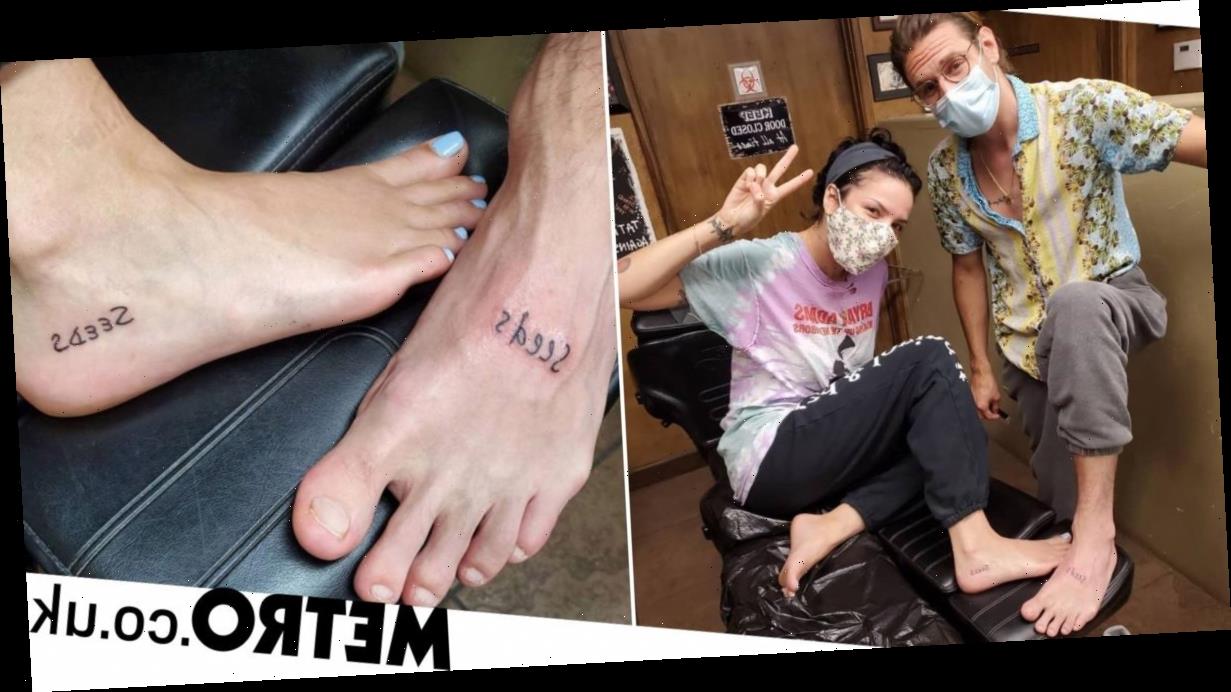 Halsey and her boyfriend Alev Aydin managed to keep another secret aside from their baby news, as the couple got matching tattoos last year.

The Boy With Luv singer announced she was pregnant with her first child yesterday, surprising her followers.

It came as an even bigger shock as very few people knew Halsey and Alev were dating.

Photos show the pair with ‘seeds’ written on the sides of their feet and scrawled in each other’s handwriting.

Amanda Owley, who had the pleasure of inking the couple, told People: ‘She said that everything with how the planets were aligned and where the cosmos were at that moment indicated that it was the best time to plant seeds into the ground of life.

‘They wanted to get the words on their feet because it was closest to the earth. They got the tattoos in each other’s handwriting, which is a pretty intimate thing to do.’

Owley added: ‘They probably practiced writing it about a hundred times before they found the right one.’

Halsey, 26, shared the news of her pregnancy with a stunning photo shoot where her baby bump was on show.

‘Surprise! 🍼🌈👼🏻’ she simply wrote and tagged Turkish screenwriter Alev, confirming him as the father.

It’s not known when Halsey began dating Alev but they were pictured together in Los Angeles at the end of last year.

The Without Me singer had previously dated rapper G-Eazy, actor Evan Peters and singer Yungblud.

The happy news comes after Halsey previously revealed how her miscarriages made her ‘the most inadequate I’ve ever felt’.

The star, who has endometriosis, has suffered three ‘demoralising’ miscarriages, including one which occurred while she was performing on stage.

Speaking to the Guardian, the Bad At Love singer said: ‘It’s the most inadequate I’ve ever felt. Here I am achieving this out-of-control life, and I can’t do the one thing I’m biologically put on this earth to do.

‘Then I have to go onstage and be this sex symbol of femininity and empowerment? It is demoralising.’