Hailey Baldwin has stunned in a series of selfies rocking different black outfits, including a pantsuit and a long-sleeved mini-dress.

Hailey Baldwin, 24, is an undisputed fashion queen, and she put her sense of style on display in a July 29 Instagram post. The supermodel, who is married to Justin Bieber, 27, took to social media to share a series of pics rocking different black ensembles from Wardrobe NYC. The first ‘fit was a pantsuit, featuring an unbuttoned blouse and low-rise bottoms, which exposed the brunette beauty’s taut midriff.

Hailey also rocked a puffy, oversized mini-dress, which featured long sleeves and was cinched at the waist. She paired the fashionable look with towering pumps, which put her toned legs on display. The final mirror selfie saw Hailey rocking a skintight bodycon dress, which she paired with a yellow clutch handbag and dainty silver drop earrings.

“Oh my god. You just sold me that look in photo two!!!!” one fan commented, while another joked, “i refuse to believe you‘re real.” As fans would know, the post comes a few days after the Biebers sparked speculation that they might be expecting. Justin shared a snap of himself and Hailey on Instagram with the caption “mom and dad.” Naturally, fans started wondering whether the singer had dropped a subtle hint that Hailey was pregnant. 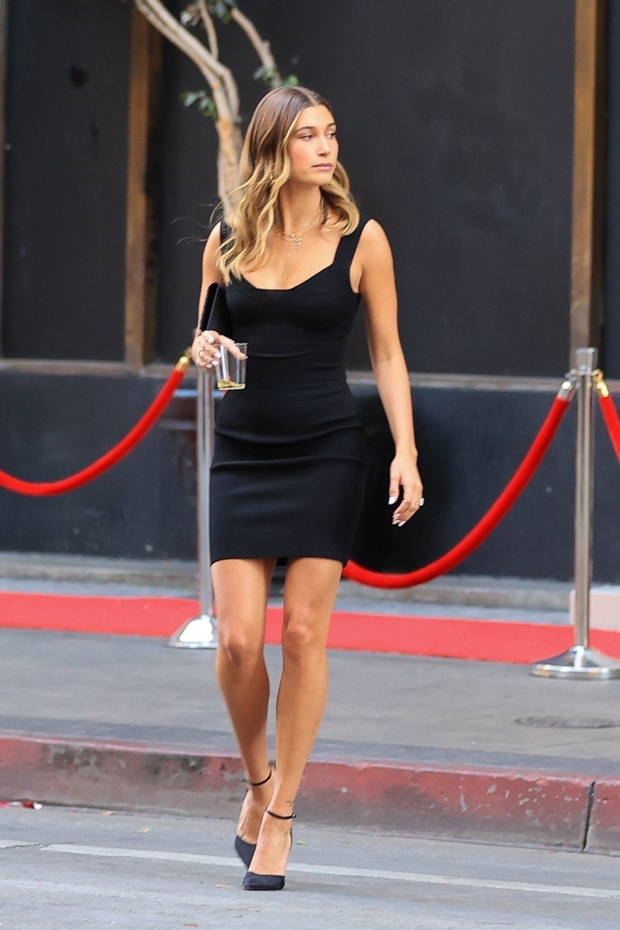 Fortunately, Hailey jumped in the comments section to quell any rumors. “I think [you] should maybe  change this question to *Dog Mom and Dad* before anyone gets it twisted,” she commented on the post. There you have it, the model and “Peaches” singer are not expecting. If fans needed any further proof, the couple were seen just days later grabbing dinner at Sushi Park in West Hollywood.

It seems the young couple are taking their time when it comes to starting a family. The Justice singer told Ellen Degeneres in a December 2020 interview that he hopes to someday have a bunch of children. “I’m going to have as many [kids] as Hailey is wishing to push out. I’d love to have myself a little tribe, but it’s her body, so whatever she wants to do” he said. “I think Hailey still has some things she wants to accomplish as a woman”.