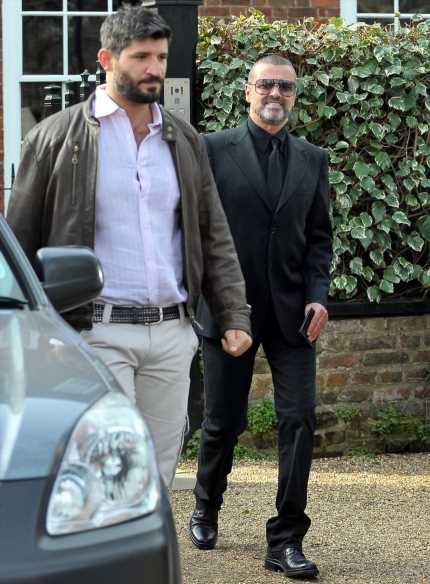 The Wham! singer — who died in 2016 — left behind real estate when he passed, and one of the homes is now being inhabited by his ex-boyfriend, Fadi Fawaz, a former hairdresser. And now, well, Fawaz is drawing the ire of Michael’s family over the apparent condition of the house — and, likely, the 45-year-old man’s mental state.

According to a report in Metro this weekend, Fawaz was spotted shirtless and smoking out on the balcony of the London home “going absolutely berserk,” with “glass flying everywhere.” The 45-year-old (pictured above, left, in front of Michael in a 2012 picture taken outside their house) told The Sun that he was “simply renovating” when asked about it, and “I can ask when it’ll be done and let you know,’ he said, ‘It’s alright, it is all in hand.”

Hmmm… and yet neighbors don’t really seem to think so, considering the disheveled and wild look of the property to some observers who live in the area.

The weird thing is that Fawaz, of course, is technically a squatter on the property; he’s lived in the home ever since Michael died on Christmas Day 2016 at the age of 53. While Michael’s family would rather have him removed from the house free and clear, he has thus far resisted their desires and has previously claimed squatter’s rights to remain there indefinitely after the pop star’s death.

George’s family has apparently sent legal letters to Fawaz asking him to vacate the Regent’s Park-area house, but he has allegedly ignored the notices, and now is using the squatter’s rights claim. A source previously shed more insight into this, um, unique living situation for the musician’s ex-boyfriend (below):

“He is being a real pain about all this He has refused to leave despite several letters and requests in the last 18 months. He is blanking them out and it appears he now has squatters rights. It’s been going on for such a long time that it’s hard to know what to do next. The lawyers are seeing what can be done. It would be a lot easier if Fadi just upped sticks and left.”

Apparently, he’s also in the business of renovating now, too, though we’ll see whether he was really telling the truth about that one… Crazy!!!