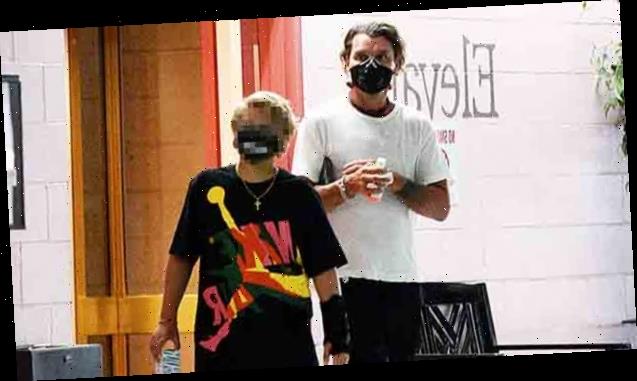 Zuma Rossdale sure is a jet setter. After celebrating his brother Kingston’s 14th birthday with mom Gwen Stefani and her BF Blake Shelton in Oklahoma, he’s now back with rocker dad Gavin Rossdale in L.A.

Gwen Stefani‘s 11-year-old son Zuma Rossdale made it back from Oklahoma to Los Angeles on May 27 to go to a doctor’s appointment with his dad Gavin Rossdale, 54. The rare father and son pics were taken as the pair exited an elevator in Beverly Hills. Zuma sported a big black cast on his right wrist and forearm. They each wore black protective face masks, following L.A. County’s recommendations, with Gavin appearing to have a more high-tech one with shiny plastic on it.

Zuma looked California cool in a black t-shirt with red and yellow Nike logo graphics on it. His fashionable mom taught him how to match well, as he added red shorts, white Nike socks and red slide-on open-toe sandals to his look. The Bush frontman kept it casual in a white t-shirt and black pants, and also showed he’s a Nike fan by wearing a pair of grey trainers with the logo swish in bright orange. Gavin and Zuma were last seen together on March 16, leaving a sporting goods store in Los Angeles shortly before the California went into a shelter at home order three days later due to the coronavirus. In addition to Zuma, Gwen and Gavin’s other sons  Kingston, 14, and Apollo, 6, have since been spending much of their quarantine time at her boyfriend Blake Shelton‘s ranch in Oklahoma.

Zuma’s appearance in Beverly Hills with his dad comes one day after his mom shared a video from Oklahoma were the pre-teen was seen in the background. Gwen, 50, posted the vid to her Instagram page showing boyfriend Blake, 43, planting a bunch of kisses on the “Sweet Escape” singer’s oldest son Kingston. It was in honor of his 14th birthday on May 26, and Zuma was seen walking around in the background. Gwen wrote, “happy b day kingking gx @blakeshelton,” in the caption. But after reading what Gavin posted in his Instagram tribute to King, it appears the boys might have actually been in L.A. and the kissing video was taped at an earlier time. Either that or the kids hopped on a private flight the same day, which is entirely possible.