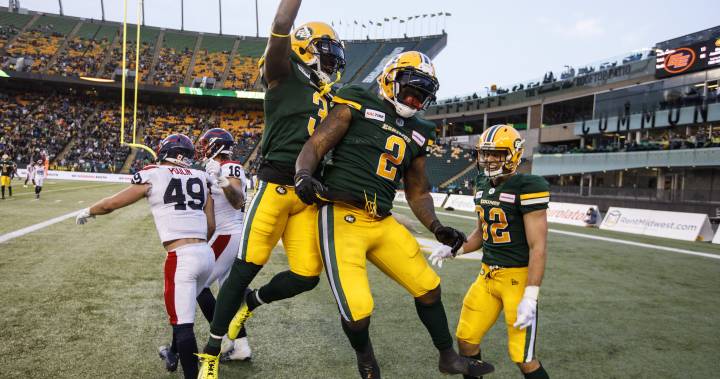 Last season, Edmonton Eskimos running back C.J. Gable recorded his first 1,000-yard rushing season. The feat was remarkable considering he had 196 carries in 16 games played, which is an average of 12.5 carries per game.

This season, Gable is second in the CFL in rushing with 415 yards and he leads the league in carries with 49 in four games — that’s an average of 19.75 carries per game.

The carries are up, the yards are up and it’s all due to the Eskimos’ commitment to having a balanced attack, and Gable couldn’t be happier.

“Yeah, they really committed this year,” he said. “They told me, ‘We’re going to have a balanced team and it’s not going to be passing the whole time.’

“I like that and it helps out. As you can see, we are doing well as a balanced team and you just can’t key on one thing. If you fill the box, we’re going to throw it, and if you back off, we can run it, so it’s a good thing.”

Listen below: Eskimos running back C.J. Gable is pleased with the coaching staff’s commitment to a balanced offence this season.

The Eskimos as a team are fifth in rushing with 453 yards and have a 4.5 yard rushing average. They are second in the CFL in rush attempts with 101, only three attempts behind the Saskatchewan Roughriders.

In last week’s win over the B.C. Lions, Gable rushed for 68 yards on 19 carries for a 3.6 yard average. Gable said even though the run wasn’t as effective, running the ball 19 times gives the defence something extra to think about.

Watch below: Some videos from Global News’ coverage of the Edmonton Eskimos in 2019.

“Man, you don’t know when we are going to do it,” Gable said. “Sometimes it’s a ride-and-decide play where the quarterback can pull the ball or he can give it to me.

“You never know and so if you have to play honest, if you think we are going to run it or pull it, then you’re going to get caught off-guard.”

The Eskimos head to Monteral to the play the Alouettes on Saturday and are looking to improve their record to 4-1 on the season.

The Eskimos beat the Alouettes in the June 14 season opener by a score of 35-28 in Edmonton. The Alouettes have won two straight games to sit with a 2-2 record.

Gable said it’s nice to have more film on their opponent but the same can be said for them.

Quarterback Trevor Harris was a full-participant at practice on Wednesday and should suit up for the Eskimos on Saturday. Defensive lineman Mark Mackie returned to the field on Wednesday after missing Tuesday’s practice.

Kickoff on Saturday from Molson Stadium in Montreal is at 2 p.m. 630 CHED will have Countdown to Kickoff starting at 12:30 p.m.