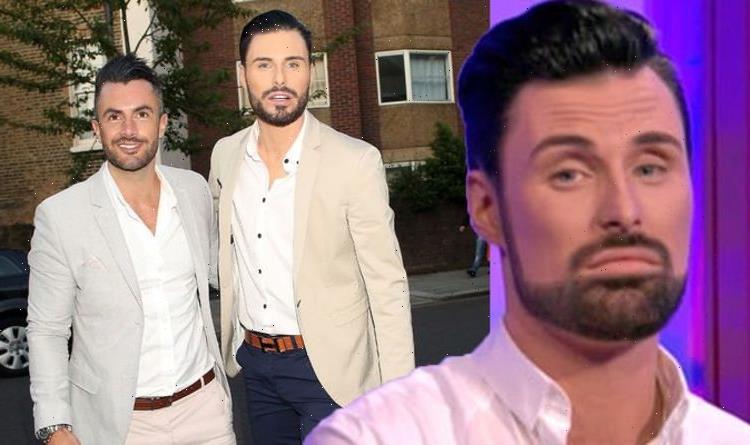 Rylan Clark, 33, took a 10-week break from presenting on BBC Radio 2 after his separation from his husband, Dan Neal. The presenter has since returned to work, recently presenting on It Takes Two, but has however felt down in the Christmas period, asking fans to cheer him up.

In view of his 1.6 million Twitter followers, Rylan penned: “F**k me need a cheer up.

“Drop ur fave joke or something please…. I’ll start with my best one…. Me. (sic)

Fans of the presenter took to the comments to leave their jokes and check in to see if he’s alright.

Charl0ttsayshi posted a video of Rylan on X Factor with the comment: “Hope this cheers you up.”

Apes147 added: “Keep smiling @Rylan. Try to remember to get back what you give in life.

Plummer67 said: “Don’t say that. Life is too precious. You can’t take the mickey out of yourself but please don’t put yourself down.

“There are too many people in the world, waiting for you to slip up. Please don’t give them the ammunition they need.”

This comes after Rylan’s recent divorce, with the presenter making the decision to step back from work in June when he announced his break-up and told fans he was prioritising his mental health.

The star, who rose to fame on X Factor nine years ago, revealed in June that he and Dan had split after six years of marriage and made the decision to step back from work.

Taking to Instagram in July, he penned: “I just wanted to write a message to thank you all for the love and kindness you have shown us.

“We are currently prioritising our mental health and looking after the ones around us we love the most.

“I am working towards getting back to the jobs I love in due course. Thank you for being patient with me X.”

Rylan recently had his famous veneers removed, ditching his teeth after eight years.

The presenter had the veneers fitted back in 2013 after winning Celebrity Big Brother.

Rylan has previously stated that his veneers actually helped his career in the early days as they distracted viewers from his presenting ability.

He told Notebook in 2017: “I got my veneers finished the day before I started hosting Big Brother’s Bit On The Side, my first presenting job.

“My mouth was swollen from the anaesthetic, they were brilliant-white, brand new.

“So no one realised I was a s*** presenter, and by the time they stopped talking about my teeth a few months later, I’d got better at the job.”