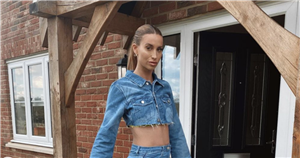 Now, the 30 year old star, who showed off her epic garden at her new home, has been posting about how there is "nothing so stable as change" after splitting from the model.

On her Instagram story, Ferne wrote: "Enjoy this right now," with a red love heart emoji as she shared a motivational quote which read: "You should be experiencing the life that's happening to you, not the one you wish was happening.

"Don't waste a moment of life trying to make other things happen; appreciate the moments you are given."

The first time mum is a doting mother to her three year old daughter Sunday after ex Arthur Collins was jailed for an acid attack in a London nightclub in 2017.

Ferne then shared another quote on her story which read: "There is nothing so stable as change."

Ferne and Jack moved in together in February and enjoyed their romantic getaway to South Africa, but it was said they split as they are in "different stages of their lives".

A source told The Sun the former couple had been struggling to spend time together due to their work commitments, and it was a case of “right guy, wrong time”.

"She’s sad but she’s realistic about the situation, that nightlife lifestyle just isn’t her and hasn’t been for years,” the source added.

"As much as Ferne likes Jack, she’s at a different stage in her life.”

Jack and Ferne looked loved-up just a week ago when the TOWIE star shared pictures of them kissing on one of their date nights.

She wrote on her Instagram: "Bank holiday fun with my babes.

"Feels so good to be back enjoying life, meeting new friends and eating sage butter ravioli.”

When Ferne's romance with Jack first emerged, she shared: "It’s early days but I actually knew him five years ago, it’s crazy.

“I met him nine years ago, I’ve known him for years. It’s early days, but yes I’ve met someone.”

Ferne previously dated Albie Gibbs, but they broke up in May 2020 in the midst of lockdown as he’s based in New York.