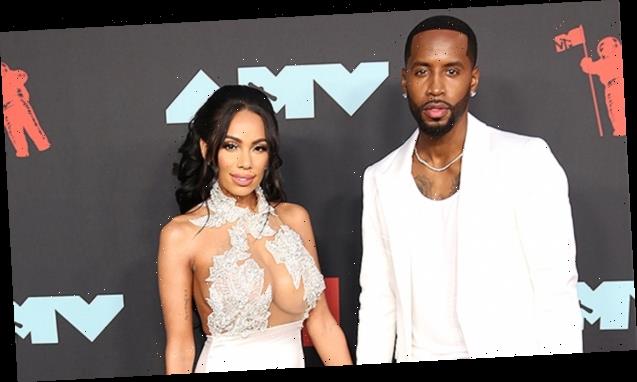 What’s going on with Erica Mena and Safaree Samuels? Fans are concerned about the status of the couple’s marriage after Safaree tweeted that he’s ‘walking away’ from his marriage. Erica has since responded in a series of a angry tweets.

This escalated out of nowhere! Erica Mena says she agrees with husband Safaree Samuels in the sense that marriage was her biggest mistake. The model, 33, who shares 1-year-old daughter Safire Majesty with Safaree, shared the latter in response to a since-deleted tweet her husband shared on February 23.

“I mean this from the bottom of my heart getting married was 1 of my BIGGEST mistakes and it will never happen again. I’m walking away before I End up in jail over some dumb shit. Nobody is worth my freedom!!!”, the “Credit” rapper, 39, allegedly wrote on Twitter. The Shade Room captured the tweet before it was removed.

Erica, who managed to directly reply to her husband’s tweet before it was removed, wrote: “Since you always run to social media like a little girl I might as well join in. I absolutely agree with you on this. You are the most selfish, vain and inconsiderate person. And not just with me but your only daughter!”

In a followup tweet, Erica shared, “Out of RESPECT for my daughter and to honor my growth as a woman. I’m going to get back to doing what I do best. Make money and be only about my business. Entertaining social media with my issues isn’t my thing.”

Erica concluded with, “Don’t let this Scorpio sting.” Though, Safaree, whose birthday is July 4, is a Cancer.

Despite the couple’s Twitter drama, both Safaree and Erica have remained silent about the situation on Instagram. However, in a series of motivational videos, via Instagram Stories, Erica shared the following message: “Sometimes you gotta talk to yourself within yourself, because you need that reminder. Don’t forget to remind yourself nobody’s lie you, nobody’s like you,” Erica said before noting that she retreated to her car to remind herself of her worth.

Erica gave birth to the couple’s first child together in February 2020, just four months after announcing her pregnancy in October 2019. Following Safire’s birth, Safaree and Erica kept their baby girl’s identity a secret for months due to privacy reasons. It wasn’t until early November (2020) that they shared the first full image of Safire on Instagram. The photo reveal came after Safire made her world debut in Safaree’s “Credit” music video on November 6.