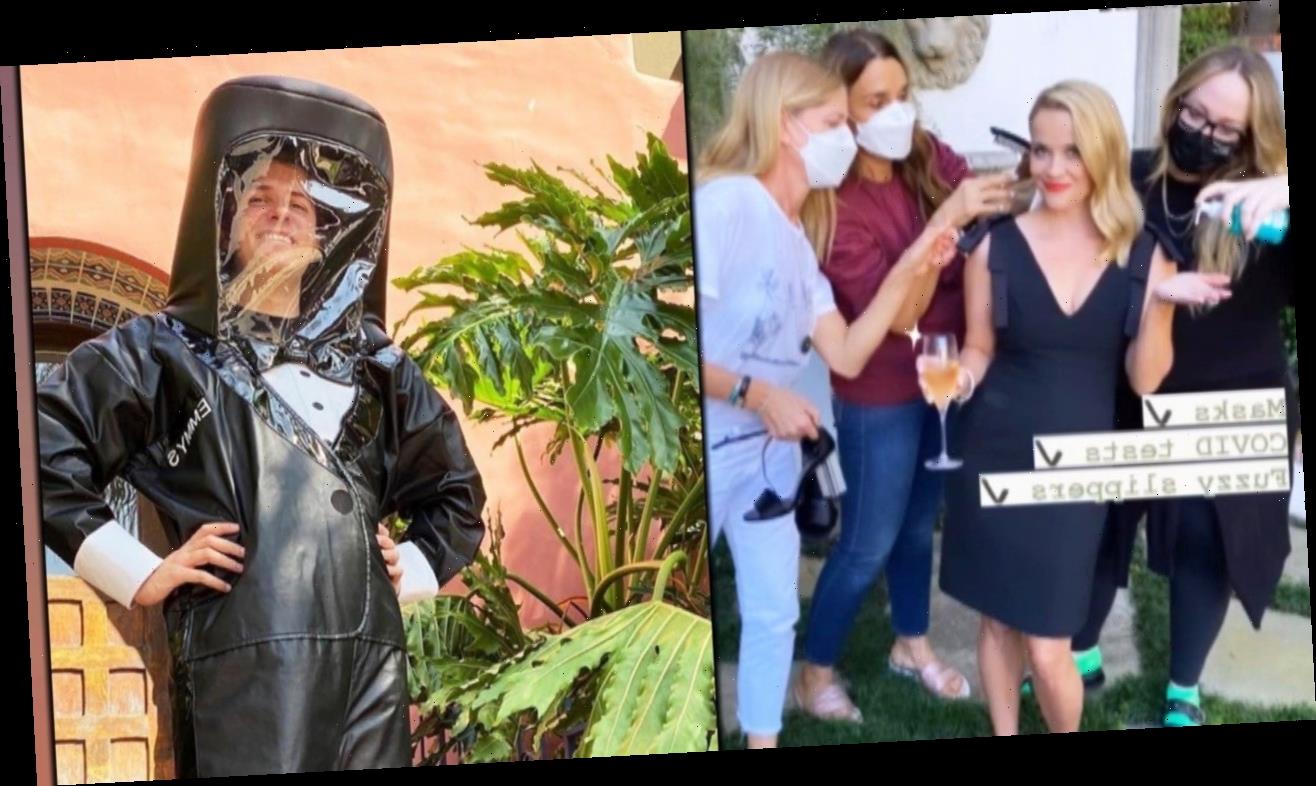 The 2020 Emmy Awards were definitely a unique experience for nominees and viewers alike — and a unique challenge for production staff!

With most winners accepting their awards from home — and host Jimmy Kimmel leading the socially-distanced show with a few presenters in person at the Staples Center in downtown Los Angeles — the Emmys came up with a safe way to deliver the statuettes to the winners without spoiling the outcomes. A hazmat-suited staffer was sent with an Emmy to each nominee’s location to wait until the results were read. If the nominee won, they got their Emmy handed to them. If they didn’t (as Ramy Youssef hilariously shared on social media) the suited staffer departed.

ET spoke with one of the hazmat-wearing production staff, writer and producer Connor Malbeuf, on Monday following the awards. Malbeuf was stationed at Reese Witherspoon’s house for the Emmys, where Witherspoon and some of her Little Fires Everywhere crew — including co-star Kerry Washington — had gathered to celebrate the series’ nomination, as well as Washington’s nod for Outstanding Lead Actress in a Limited Series or Movie.

Malbeuf said he was randomly assigned to Witherspoon’s house, and was given a blank award that could have been handed to either Witherspoon or Washington, given the categories’ outcome. However, while he was excited to attend — “She’s a legend!” he said of Witherspoon — their New Year’s-themed festivities ultimately ended up being more of a consolation party as the series and Washington lost out to Watchmen and star Regina King.

“Everyone was just having a good time, drinking, and obviously still being safe,” he said of his assignment. “It was a very good environment, and it was crazy cool, and I was honored to be there to… not give them their award.”

When presenters left their assignments and finally were safely able to shed their hazmat suits — which Malbeuf noted were a pleather-type material that left him feeling “like a wet mop” — they swapped stories with one another about their Emmys night experiences.

“Some of them got full-on photos and with the cast,” he shared. “I know Shia went viral because of the Ramy video, and I think Phil got to hang a little bit with Hugh Jackman. So there were some really good stories and I mean, Kathleen, who was leading our Schitt’s Creek camp in Toronto, she probably just partied with them all night.”

Team Schitt’s Creek certainly had reason to celebrate. The fan-favorite Canadian sitcom swept the Comedy categories entirely, winning all seven Emmys, one right after another — and keeping Kathleen pretty busy. The series’ creator and star — and newly minted four-time Emmy winner — Dan Levy spoke with ET after the awards, joking about the struggles that faced their suited presenter.

“The poor hazmat suit just completely fogged up and I watched her panic before each award going out just trying to like clear the hazmat suit so that she could see her way to the podium,” he said. “Next time, we need a little bit of ventilation I think in those suits!”

See more from the 2020 Emmys in the video below!