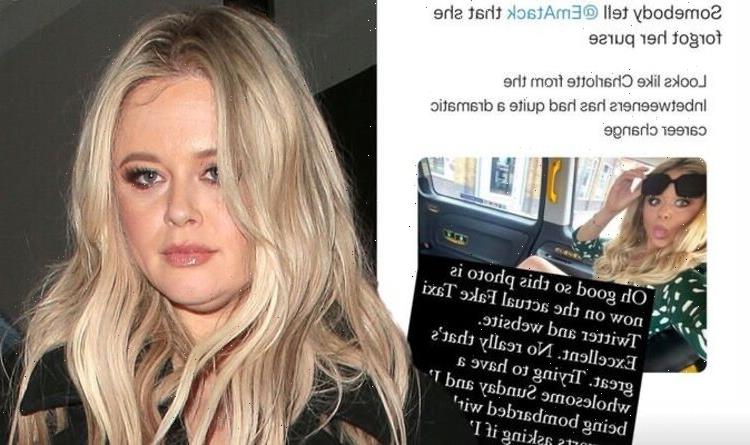 Trying to have a wholesome Sunday!

Emily took to her Instagram story in view of her 1.8 million followers to show how a pornographic Twitter page was featuring her picture.

Alongside a photo of Emily in a taxi, the Twitter page @FakeTaxi had written: “Looks like Charlotte from the Inbetweeners has had quite a dramatic career change.

“Somebody tell @EmAtack that she forgot her purse.”

Fake Taxi is an explicit site where men have intercourse with women in the back of cabs, leading Emily to fume at the idea of being associated with such a site.

She said in response: “Oh good so this photo is now on the actual Fake Taxi Twitter and website.

“Excellent, No really that’s great. Trying to have a wholesome Sunday and I’m being bombarded with perverts asking if I’d like to accidentally take a wrong turn into the woods.

The photo in question shows Emily sitting in the back of a black cab wearing a green mini dress, as she playfully sticks out her tongue.

Snapping back, at the trolls, Emily posted the comments on her Instagram stories on Thursday and said: “Ffs. Here we go again.” (sic)

In a follow-up post, the actress shared a screenshot of a comment which aimed to clarify the crude meaning behind the meme.

Another troll commented on the meme: “I’d rather watch that than her stand-up to be fair.”

But Emily brushed off the harsh comment as she quipped: “This comment should have more likes. Savage.”

Emily has been open about the trolling she receives on social media, and previously said she’s “lost count” of the times she’s felt “winded” by the comments.

She told The Sun: “I’ve received countless levels of online abuse but increasingly, it has become very sexualised.

“I’ve receive hundreds of sexually motivated messages – from rape threats, to men telling me exactly what they’re going to do to me in the most brutal and misogynistic ways.

“So much more needs to be done to stop these vile abusers. They certainly wouldn’t get away with saying these sorts of things if they saw me on the street. There needs to be tougher penalties, the threat of prison needs to be enforced.”