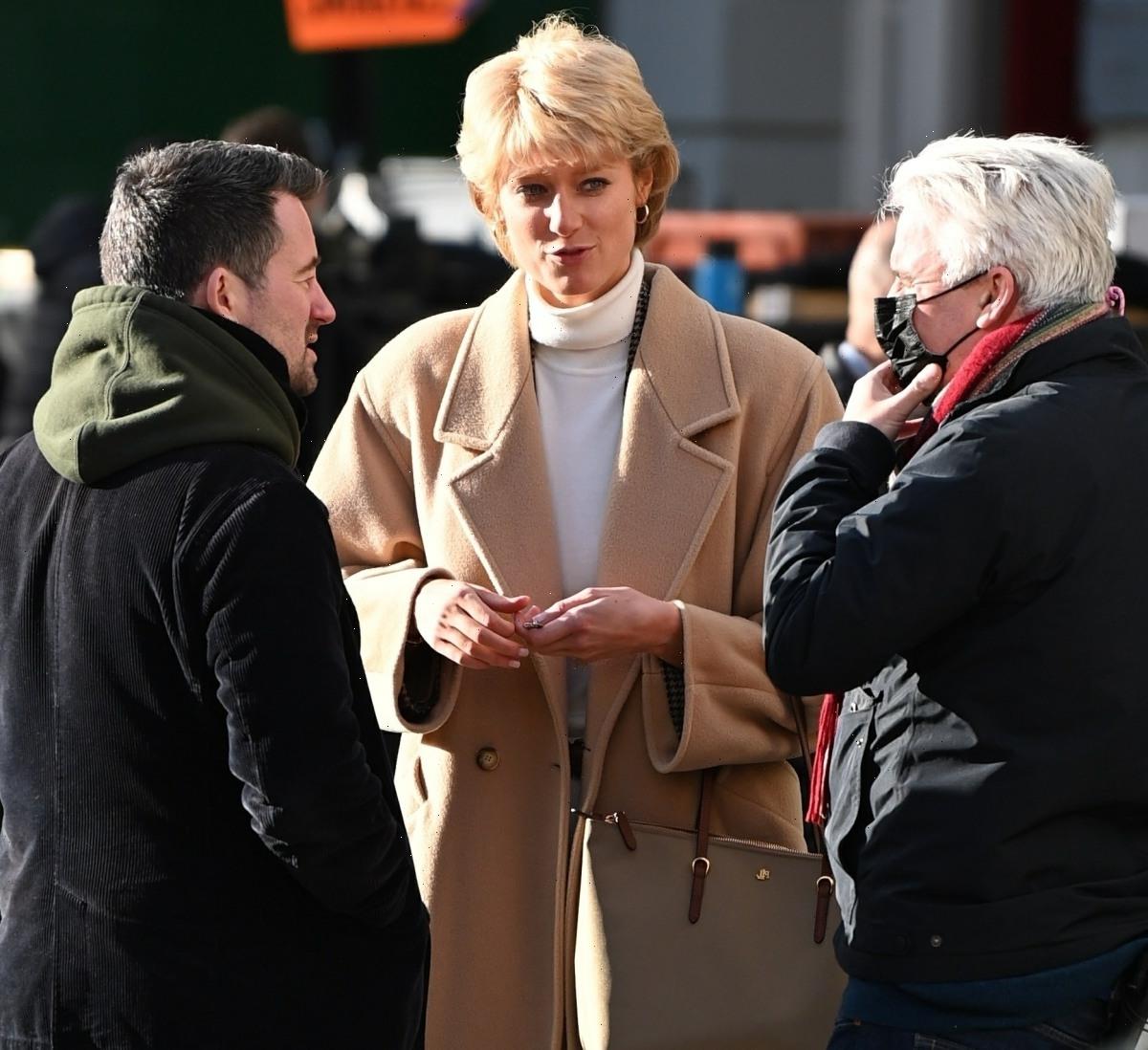 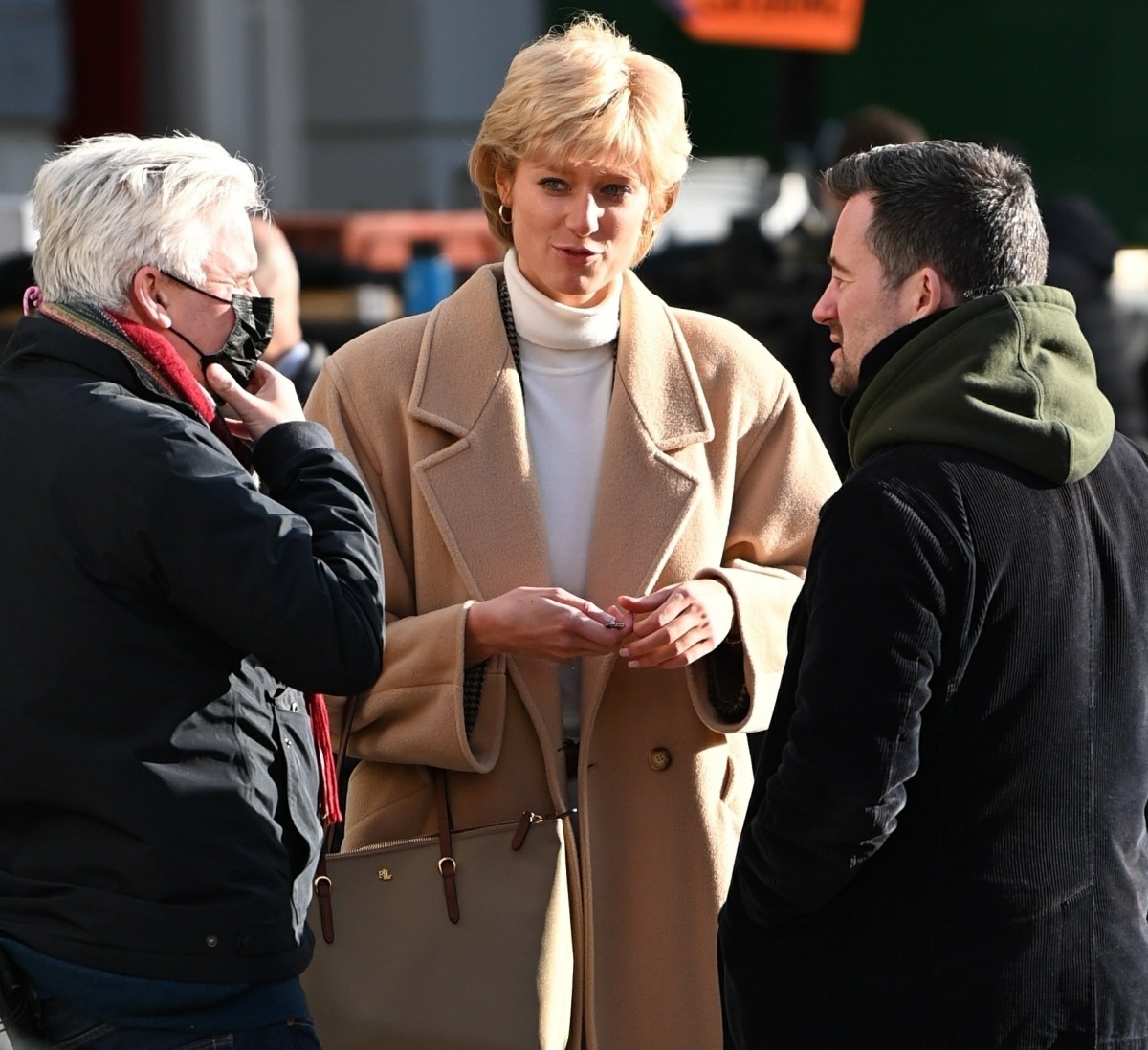 The Crown’s Season 5 has been filming for months in and around London. The fifth season sees a reboot of the cast, so it will feature Imelda Staunton as QEII, Dominic West as Prince Charles and Elizabeth Debicki as Princess Diana. Debicki has been photographed in her Diana-drag for months too, but most of those photos have been mega-exclusive ($$$). But this week, The Crown was filming in London, and I think the scene was supposed to be Diana being swarmed by paparazzi on the street as she visited a friend’s home. My guess is that this is probably her visit to the friend who “contributed” to Andrew Morton’s Diana: Her True Story. Diana’s visit was a confirmation that she had helped Morton on the book. In any case, there were fake paparazzi on the scene and real paparazzi photographed the filming of the scene.

I still say that Debicki is going to be a great Diana. I thought Emma Corrin was great too, although it annoyed me that Corrin is so small and Corrin never really got Diana’s physicality right. Corrin nailed everything else about Diana though. Debicki has the height, the legs, the physicality to pull off Diana. It looks like they spent more money on Debicki’s Diana wig too! Remember, Debicki will be playing Diana in her 30s, when Diana was in the process of giving up the big hair and shoulder pads. Diana began editing her look a lot. But this outfit they have on Debicki… that’s pure Diana.

I honestly can’t wait for Season 5, which will come out this fall, probably. Charles is going to be in full meltdown mode. Prince William will be incandescent too, I’m sure. Oh sh-t, I totally forgot that Olivia Williams is playing Camilla in Season 5!! Jonathan Pryce will play Philip… which is a very odd choice. And Jonny Lee Miller as John Major!! OMG. 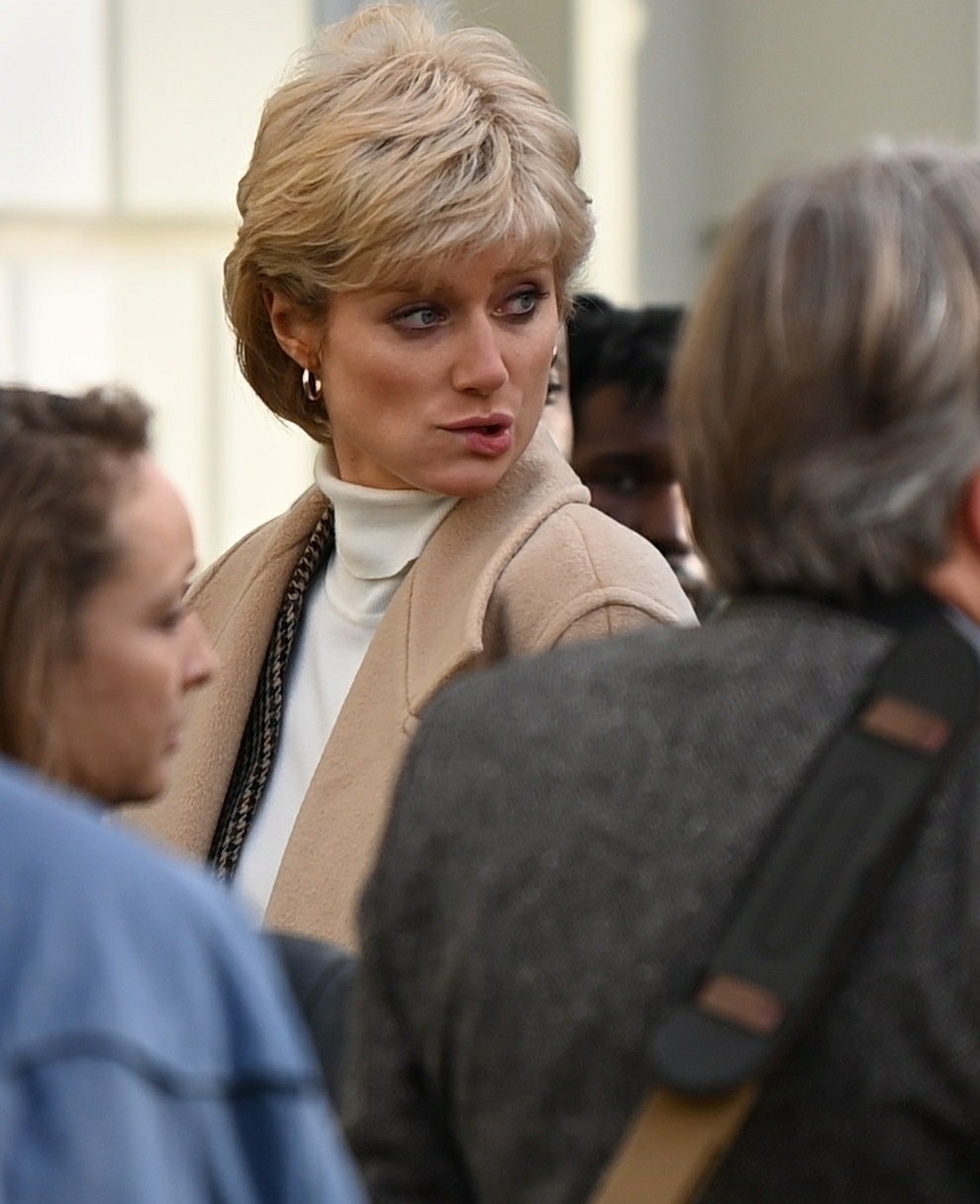 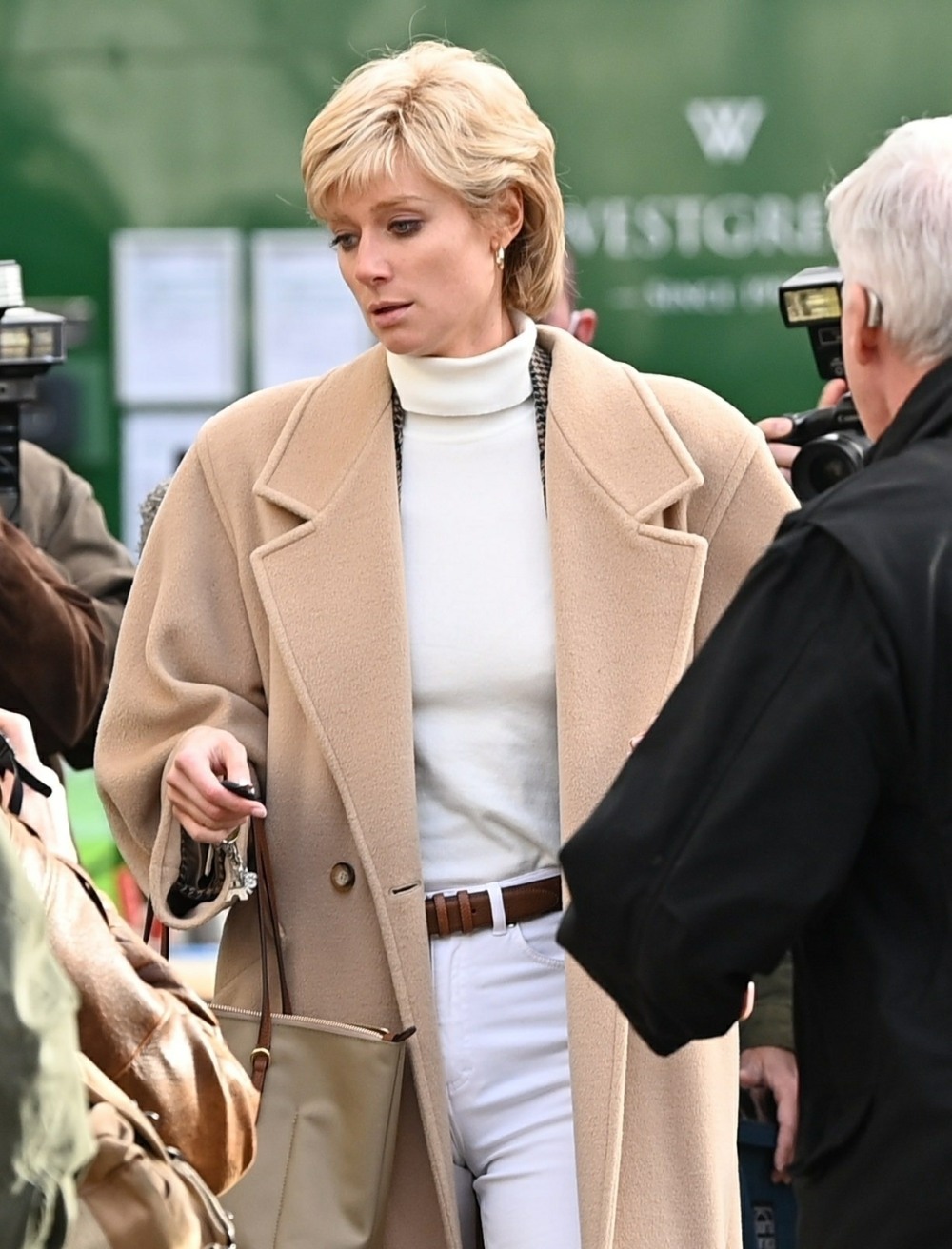 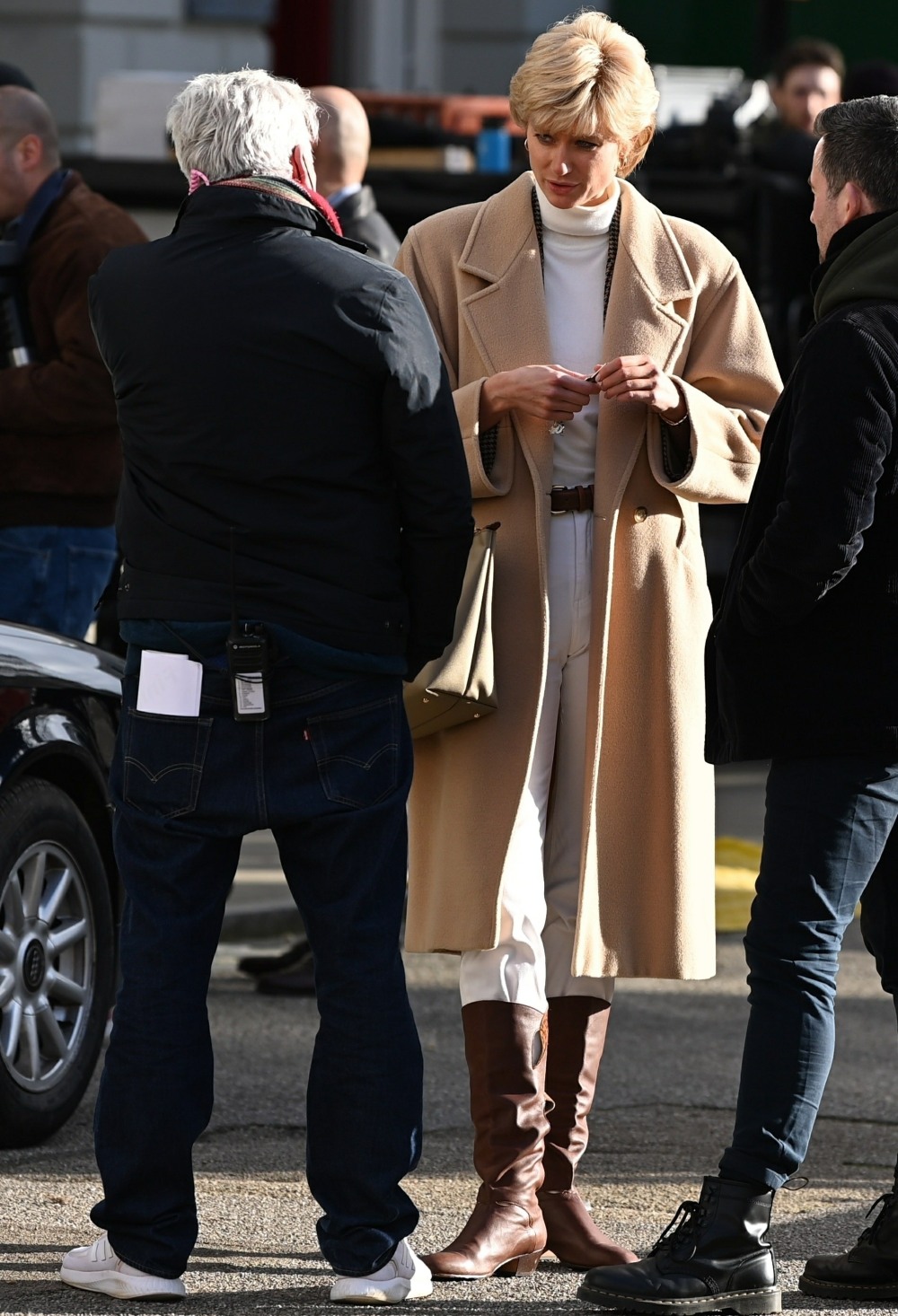