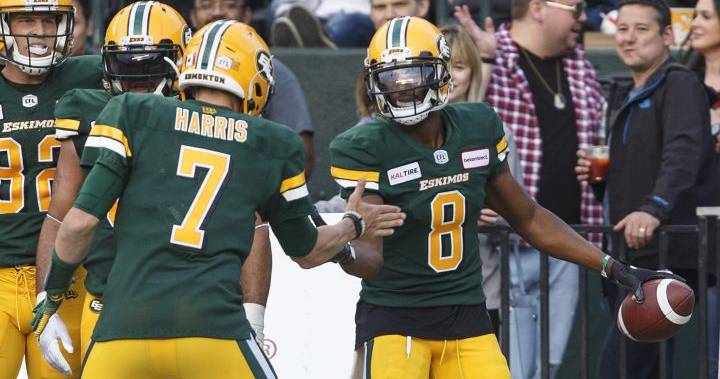 It has not been a perfect start to the new CFL season for the Edmonton Eskimos. There have been too many penalties and too many field goals, but they will take a 2-1 record in their first three games as they go back to work on Friday after their first bye week of the season.

Defensive back Josh Johnson says it’s now time to build on the work the team has put in so far.

“We are not content but we are happy with where we are at, but we know we have a lot more to improve on and a lot more work to do.”

The Eskimos, who started the season 2-0 at home before a loss in Week 3 to the Blue Bombers in Winnipeg, will play two more games on the road before they return home.

In fact, the next two games will see the Eskimos travel as far as you can in one week in the CFL. They play the B.C. Lions in Vancouver on Thursday and then will face the Alouettes in Montreal nine days later.

The Eskimos won’t return to the Brick Field at Commonwealth Stadium until July 25 when they host the Toronto Argonauts.

The immediate concern for the Eskimos, ever since their 28-21 loss in Winnipeg on June 27, is a lack of finish. The team produced 445 yards in offence and had over 36 minutes time of possession, but they did not score a touchdown, despite staying close in the game and having a chance to win it thanks to a new team record seven field goals from Sean Whyte.

For quarterback Trevor Harris, the reason for the lack of finish is easy to explain.

“Execution,” said Harris, who has already topped 1,000 yards in passing and has six TD passes in just three games this year.

“We have to make sure we rectify that and make sure it’s a once in a blue moon type of deal.”

The other concern is penalties. After another 13 flags for 139 yards in Winnipeg, the Eskimos, in total, have been penalized 422 yards on 39 infractions – that’s 14 more penalties and almost 200 yards more than the Lions, who are the next most penalized team in the CFL going into Week 4.

“That’s our biggest thing right now,” said Johnson, who knows the corrections have to come from the players. “Coaches only can tell us so much, it’s got to be more about discipline.

Listen below: The July 2, 2019 edition of the Eskimos Coach’s Show.

The Eskimos will take Saturday off and will be back at practice on Sunday, getting set for their game Thursday in Vancouver. The Lions play on Saturday in Toronto and are looking for their first win of the season.