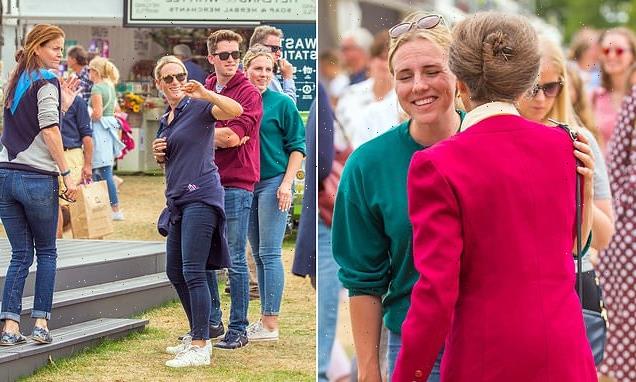 EDEN CONFIDENTIAL: We are family! Zara Tindall welcomes extended clan as she relaxes at horse trials

Zara Tindall’s father, Captain Mark Phillips, 73, has a young new girlfriend, as I disclosed on Saturday, but his various children all try to get along.

The Queen’s granddaughter, 41, spent time bonding at the Land Rover Burghley Horse Trials in Lincolnshire at the weekend with her half-sister, Stephanie.

They were joined by William Hosier, whom Stephanie married in July.

He is now seeing Florence Standaert, a Belgian equestrian thought to be in her 40s. Zara’s mother, Princess Anne, 72, greeted Stephanie with a kiss. 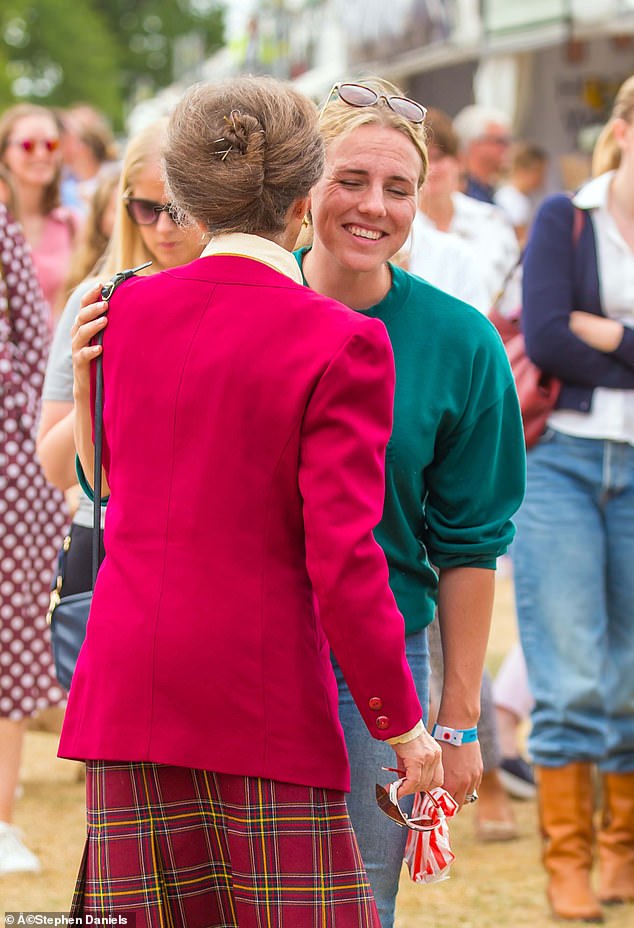 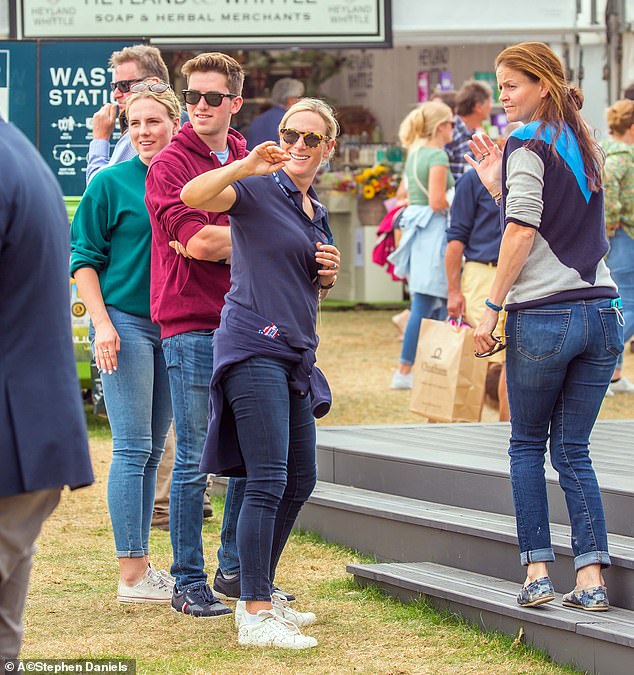 The Queen’s granddaughter, 41, spent time bonding at the Land Rover Burghley Horse Trials in Lincolnshire at the weekend with her half-sister, Stephanie

He’s one of the biggest names in the fashion world, but British Vogue editor-in-chief Edward Enninful has claimed he can’t hail a cab because taxi drivers won’t stop for him due to his skin colour.

Enninful, whose famous friends include Kate Moss and Naomi Campbell, says he still has to ask his aide, who is not black, to flag one down for him.

‘My assistant still has to hail a taxi — despite the position that I’m in,’ says Enninful, 50, who was born in Ghana.

A security guard at Enninful’s Mayfair offices was sacked in 2020 after refusing him entry to Vogue House.

To add insult to injury, the guard told him to use the tradesmen’s entrance at the rear of the building. ‘I’m a black man in the world; it wasn’t the first time it happened and it’s not going to be the last time,’ Enninful now says.

Edward Enninful (left), whose famous friends include Kate Moss and Naomi Campbell, says he still has to ask his aide, who is not black, to flag one down for him. Pictured: Enniful with star Salma Hayek

‘When those incidents happened, it made me realise: do not forget who you are, do not forget where you’re from and do not think you’re so amazing these things won’t touch you.’ Enninful was speaking at the BFI Southbank in London to promote his memoir, A Visible Man, followed by a party at Claridge’s.

It was speculated that the Duchess of Sussex might attend, but she was notable by her absence. Meghan guest-edited Vogue’s bumper September 2019 issue.

Enninful’s arrival prompted a mass exodus of staff, including deputy editor Emily Sheffield, a baronet’s daughter and David Cameron’s sister-in-law, who lost out on the top job.

After the former stylist succeeded Alexandra Shulman in 2017, he reportedly said his priority was to ‘get rid of the posh girls’.

He now says of Shulman: ‘She represented a different time. In 25 years there had only been 12 models of colour on the front cover. I just thought: “Let me bring in a new world, let’s create a magazine that was inclusive and everybody could see themselves in.” ’

As pointless co-host, he was renowned for being able to reel off facts and figures at the drop of a hat, but best-selling author Richard Osman felt slow-witted when appearing alongside comedian and team captain Lee Mack on BBC panel show Would I Lie to You?. ‘Lee is so quick,’ Osman tells me at the first night of Horse-Play at Riverside Studios in West London. ‘He’s the only one whom producers don’t have to edit the time between a comment and a response.’

He’s appeared in films including The Eagle Has Landed and The Elephant Man as well as TV’s Game Of Thrones, but John Standing performed his most satisfying role at the weekend: father of the bride. 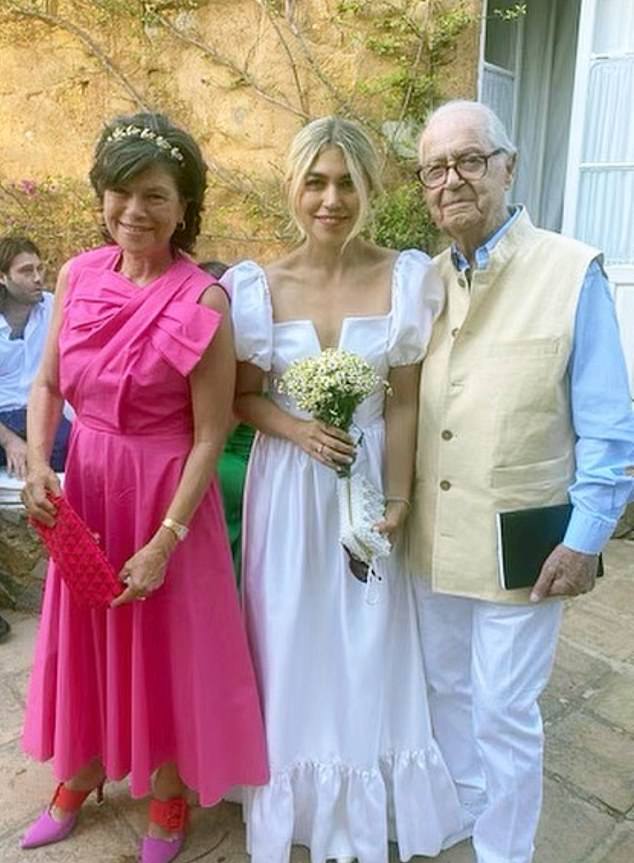 Actress Tilly, 31, exchanged vows with Sotheby’s car expert Felix Archer, to the delight of her mum, Sarah Standing (pictured with Tilly and John)

The Old Etonian baronet, 88, walked daughter, Tilly, up the aisle in Andalusia, Spain.

Actress Tilly, 31, exchanged vows with Sotheby’s car expert Felix Archer, to the delight of her mum, Sarah Standing (pictured with Tilly and John).

Journalist Sarah, 63 — the daughter of actress Nanette Newman and director Bryan Forbes — has written about her brave battle with non-Hodgkin’s lymphoma.

Scarface star Al Pacino is making a killing — by charging British fans up to £365 a pop to attend a gala dinner. And they won’t even get to meet the Hollywood legend. Pacino, 82, who has a reputed fortune of £100 million, will talk about his glittering career on stage in Dublin, London, Birmingham and Glasgow next year. Fans buying the most expensive packages, at £365, are told they have ‘a chance to ask a question in the audience Q&A’. An offer The Godfather fans can’t refuse?

Prancing Frankie kicks up her heels

Aristocratic model Frankie Herbert has trained as a ‘holistic healer’, but she’s determined to keep sharing racy photos of herself.

Aristocratic model Frankie Herbert (pictured) has trained as a ‘holistic healer’, but she’s determined to keep sharing racy photos of herself

The Earl of Carnarvon’s niece, 26, who once strutted her stuff down the catwalk for the Queen — the only time Her Majesty has ever attended a fashion show — declares: ‘I felt a need to be “professional” and look a certain way in order to have credibility.

‘But I came to the conclusion, f*** it! Sometimes in life you gotta get on an outrageous sexy outfit and prance about.’