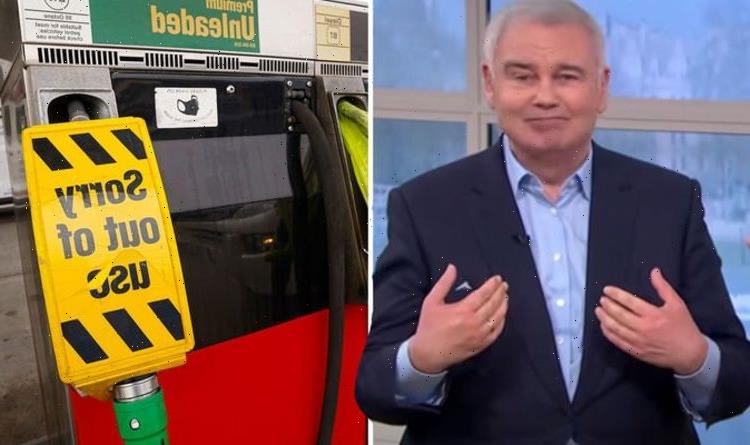 Following news that there is shortage of petrol supply at stations across the UK, an influx of drivers have flocked to forecourts to fill up their tanks. BP have revealed that 100 petrol stations have been hit by shortages due to a lack of lorry drivers.

However, they have prioritised their motorway services to ensure as many people as possible have access to fuel for long journeys.

The Esso and Tesco have also had to close some of their stations amid the panic.

Taking to Twitter, Eamonn Holmes, 61, reacted to the news, urging the Government to step in.

He wrote: “I’ve seen the #Supermarketshortages with my own eyes.

“A dearth of Taxi drivers in Belfast.

“Now I’ve just left the house to find the world seems to have run out of petrol!!!!(

“Nobody saw this coming? Somebody in Government better start sorting this #haulage problem out soon.”

Twitter user @Maerdydd accused Eamonn and the media of worrying people about the shortages.

Hitting back, he wrote: “Stupid Cow that u r…. I was simply pointing out that we’re discouraged from reporting such things… as if they don’t exist.”(sic)

Social media user Tim Collins also accused the presenter of being a part of the scaremongering.

In response, the This Morning star wrote: “Well look if u can get me a few gallons I’d appreciate it mate.”(sic)

Cathal Robinson added: “It’s called Brexit, the people should have voted to remain.”

Andii penned: “Things are going to get worse before they get better, we have a completely incompetent government who are more focused on trying to get people jabbed than what’s actually important!”

Should there be a concern, he told the BBC that the government could bring in the army to drive fuel tankers if it would help.

He went on to say that Brexit was not the reason behind UK’s shortage of lorry drivers.

Shapps added: “Not only are there very large and even larger shortages in other EU countries like Poland and Germany, which clearly can’t be to do with Brexit, but actually because of Brexit I’ve been able to change the law and alter the way our driving tests operate in a way I could not have done if we were still part of the EU.”

A Government spokesperson added that there was no shortage of fuel but a “very resilient and robust supply chain”.

“People should continue to shop for fuel as usual,” they continued to The Mirror.