Drake and Meek Mill have definitely left all their drama in the past. Meek dropped his new album, Expensive Pain, on Oct. 1, and Drake took to Instagram to send him love for the release. “Proud of you boy,” Drake wrote, tagging Meek, on his Instagram Story. “Since the Bahamas cook up we were planning the next chapter. Time to eat.” This love is definitely a far cry from where the two men stood back in 2015.

The pair’s feud started in July 2015 when Meek claimed that Drake used a ghostwriter to pen his raps, including one of the verses that he wrote for a collaboration they’d previously done together. He went on a wild Twitter rant to call Drake out. At the time, Meek was dating Drake’s friend, Nicki Minaj, and he briefly (sort of) apologized to his nemesis while performing onstage with Nicki. “I was just upset as a fan,” Meek said at the time. “Shoutout to Drake. Let him be great in all motherf***ing lanes he’s great in.” However, the love didn’t last long.

Later that month, Drake released his first diss track aimed at Meek, “Charged Up.” On the song, he rapped, “N****s snitching on us with no interrogation, I stay silent ’cause we at war and I’m very patient.” He also expressed regret over previously collaborating with Meek. “Done doing favors for people ’cause it ain’t like I need the money I make off a feature,” he said. “I see you n****as having trouble going gold, turning into some so and sos that no one knows.” Meek took to Twitter to call the song “soft” after its release. 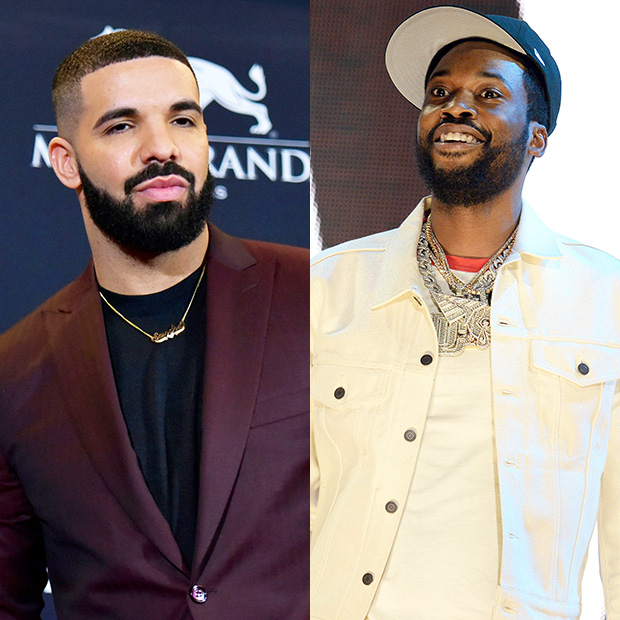 Apparently, that only fired Drake up even more. Days later, he released a follow-up diss track, “Back to Back.” The song quickly went viral, especially one line that referenced Nicki. “Is that a world tour, or your girl’s tour?” Drake wondered in the lyrics. “I know that you gotta be a thug for her, this ain’t what she meant when she told you to open up more.” The drama continued into the beginning of 2016, with more diss tracks from both sides.

Finally, in 2018, after Meek’s release from prison, the guys squashed their beef for good. In September of that year, Drake brought Meek out onstage when he was on tour in Boston. They shook hands in front of the crowd to let everyone know that the feud had ended. “This really gave me peace of mind tonight,” Drake wrote on Instagram afterward. “Healing and moving forward created one of the most electric and gratifying moments of my career. @MeekMill, I’m happy that you are home and that we could find out way back to our joint purpose.” Meek also addressed the situation, writing, “WE BOTH HAPPY AS (expletive)!”