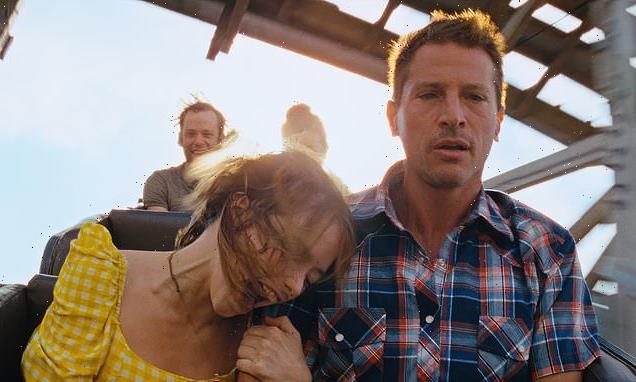 Down, but not out, in Trump country: BRIAN VINER reviews Red Rocket

Verdict: Seedy, but warm and funny

Red is the colour of this week’s two most interesting and appealing releases, although Sean Baker’s Red Rocket is not for the faint-hearted.

Baker is a singular filmmaker whose best-known pictures to date are Tangerine (2015) and The Florida Project (2017).

I especially loved the latter, an exquisitely-observed slice-of-life drama about a mother and daughter living on the breadline just along the highway from Walt Disney World, that gaudy symbol of the American fairy tale.

Baker likes to expose the underbelly of American life, though in Red Rocket — which he co-wrote, directed, edited and produced — he ventures a bit lower down than the underbelly. 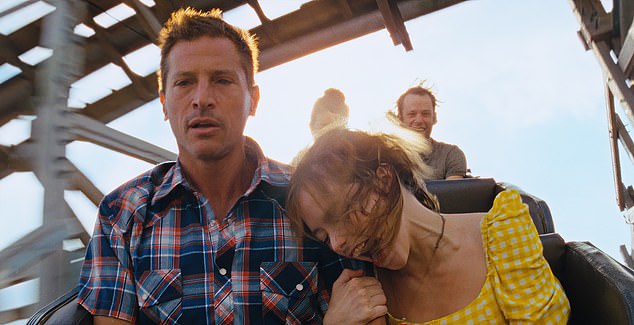 Red is the colour of this week’s two most interesting and appealing releases, although Sean Baker’s Red Rocket is not for the faint-hearted

If you will forgive the namedrop, John Cleese once suggested to me there’d been no great comedy films since A Fish Called Wanda — then conceded I’d ruined his theory by citing Big, the lovely fantasy with Tom Hanks, which came out a whole week later. C5, Sunday, 4.20pm.

Grudgingly, they agree to let him stay in their cramped, shabby home, on condition that he pays rent.

So, travelling around town on a bashed-up bicycle several sizes too small for him, he turns instead to dealing drugs, selling cannabis roll-ups.

As in The Florida Project, the story unfolds rather like a fly-on-the-wall documentary in the shadow of a symbol of Americana, in this case a vast Texan oil refinery.

To ingratiate himself with Lexi and Lil, Mikey treats them one day to all they can eat at a Donut Hole outlet across the way from the refinery, where his eye is turned by the pretty teenager behind the counter, a redhead nicknamed Strawberry (Suzanna Son).

She falls for his fast-talking charm and the pretence that he has money, and soon they are an item, despite a generational age gap.

She also encourages him to sell his dope to the ‘hard-hats’ from the refinery, increasing his profits.

All this is about as seedy as it sounds, with nudity and profanity aplenty, yet the film is made with tremendous heart and humour, and a wonderfully keen, almost painterly eye for the kind of America that Norman Rockwell certainly never depicted. It unfolds during the 2016 U.S. presidential campaign, and although Baker doesn’t labour the point, this is the essence of Trump country, where the only good Democrat is a dead Democrat.

As in his other films, Baker’s leads are relative unknowns, which compounds the documentary feel. Rex, in particular, is a revelation.

So does that of Meilin (voiced by Rosalie Chiang) in Turning Red, an engaging new Pixar animation set in Toronto.

Meilin, a sparky 13-year-old girl with attitude, wakes up one morning having metamorphosed into a giant red panda. 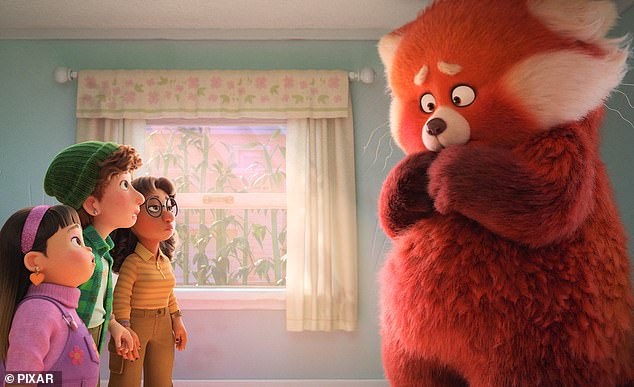 So does that of Meilin (voiced by Rosalie Chiang) in Turning Red, an engaging new Pixar animation set in Toronto

Hearing her shrieks from the other side of the locked bathroom door, her Chinese-Canadian mother Ming (Sandra Oh), concludes that she has begun to menstruate, though she puts it more coyly: ‘Did the red peony bloom?’

Ming is suffocatingly protective of her only daughter, not least, as it turns out, because she is aware of the genetic curse that will one day turn her into a panda whenever she is agitated; it happened to her, too.

Domee Shi, the first woman to direct a Pixar film, does a lovely job, keeping the story buoyantly witty and never allowing it to be overwhelmed by the rather obvious metaphor about bodies changing in adolescence.

It also has much to say on another time-of-life issue that most young teenagers will recognise; that moment when your friends become more precious than your parents.

Red Rocket is in cinemas. Turning Red is on Disney+.

Ryan goes back to the future 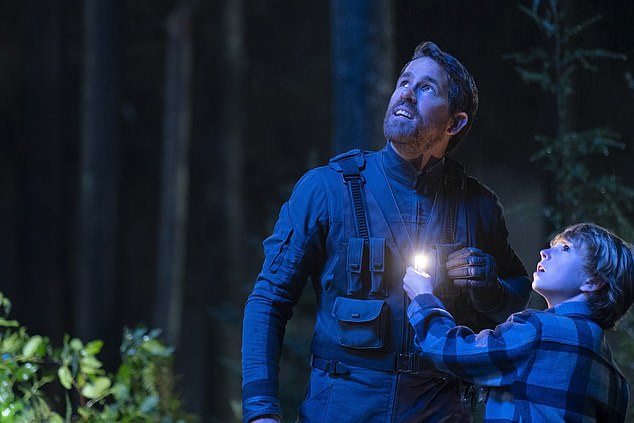 The Adam Project (HHHII, 106 mins) is a jaunty sci-fi adventure starring Ryan Reynolds as Adam, a fighter pilot who travels backwards through time from 2050

The Adam Project (***, 106 mins), available from today on Netflix, is a jaunty sci-fi adventure starring Ryan Reynolds as Adam, a fighter pilot who travels backwards through time from 2050 and, though aiming for 2018, first lands in 2022 where he hooks up with his own 12-year-old self (delightfully played by Walker Scobell).

He is chased through the decades by the baddies he holds responsible for the death of his wife (Zoe Saldana), but can’t change the future without the help of his scientist father (Mark Ruffalo), who by 2022 has died in a car crash — but in 2018 is still very much alive, refining the principles of time travel. I hope you’re still following.

Shawn Levy’s film echoes Back To The Future so conspicuously that there’s a direct reference to that 1985 classic, and bears further striking similarities with a movie he made himself, also featuring Reynolds, last year’s Free Guy.

This is not as good as either, partly because it suffers from a kind of filmic split-identity, lurching uneasily between wisecracking comedy, video game-style battle scenes and poignant family relationship drama.

On the other hand, Reynolds is one of the few stars who can pull that sort of thing off, and a terrific supporting cast also includes Jennifer Garner as Adam’s mother. There’s plenty to enjoy.

Francis Ford Coppola’s re-cut of The Godfather Part III, given the unwieldy title The Godfather, Coda: The Death Of Michael Corleone (****, 15, 162 mins), signally failed to make a star of the director’s daughter, Sofia. 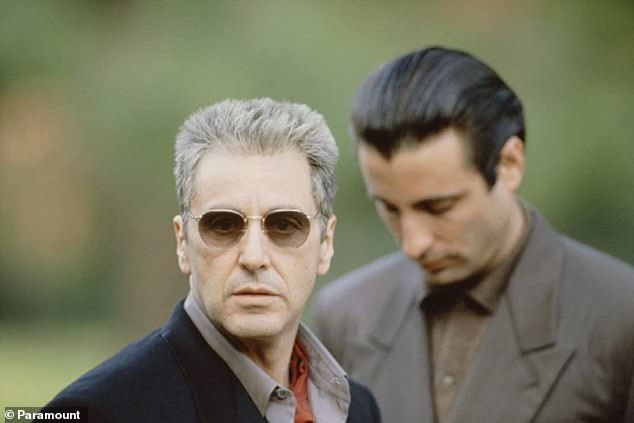 Francis Ford Coppola’s re-cut of The Godfather Part III, given the unwieldy title The Godfather, Coda: The Death Of Michael Corleone

Her performance as Mary Corleone was widely ridiculed, though she later got her own back by becoming a fine director in her own right.

This film, which completes the re-release of Coppola’s mighty trilogy, is much better than it is sometimes made out to be, even if it deservedly lives in the long shadow of the original, for my money the greatest movie ever made, and Part II, first among sequels.