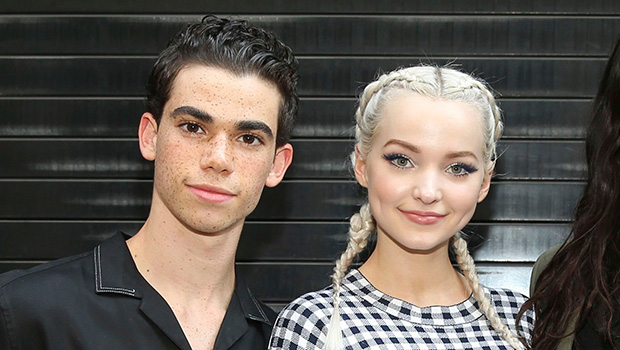 Dove Cameron battled through tears as she read a letter to reflect on Cameron Boyce’s sudden death. The Disney star revealed that her ‘Descendants’ co-star helped her through ‘endless breakdowns’ and more.

Dove Cameron, 23, lost one of her best friends and pillar of supports, Cameron Boyce, who passed away in his sleep after a seizure due to an “ongoing medical condition” on July 3. Understandably, she confessed to feeling “really weird” about talking about her Descendants co-star’s death, especially since he was only 20. But after six days passed, Dove decided the time was right to read out loud a heartfelt message she wrote for Cameron, his family, and fans. “The only way to get through it right now is to… be expressive and connective, so I wrote something that I’m gonna try to read,” Dove began in a series of six videos, which she uploaded to Instagram on July 9. “The last 72 hours have felt like two weeks and I have spent them trying to make my thoughts and feeling into words.”

“I’ve been unsuccessful thinking about trying to summarize something where there are no adequate words in the English language…I’ve never stuttered or been unable to think before these last few weeks, my system is still in shock, my brain is still foggy and full of holes,” Dove continued. In addition to acknowledging the pain Cameron’s family is feeling, she added, “I’ll never have enough words for the pain I feel.”

Dove then praised Cameron as an “Earth angel” who “got me through eating disorders, helped me through a dark relationship and through endless breakdowns.” The Disney star concluded her video series by saying “goodbye” to her “dear, dear friend and brother” — you can watch the full tribute below, in which she reflects on more of Cameron’s memorable traits.

Dove and Cameron starred in all three Descendants movies together, and teamed up for countless musical numbers. Dove portrayed Maleficent’s daughter Mal, while Cameron took on the role of Cruelle de Vil’s son Carlos. Descendants 3 is set to premiere in Aug. 2019, and the cast was gearing up to do press for the third film.