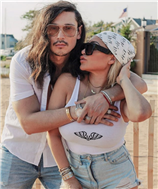 Darcey & Stacey viewers have witnessed the ups and downs of Darcey’s romance with Georgi Rusev.

We have all watched Darcey Silva become entangled with toxic men.

Jesse was untrustworthy and manipulative. In many ways, Tom was cut from the same cloth.

Is her fiance Georgi just using Darcey so that she’ll spoil him like a boy toy?

At the end of Season 1 of Darcey & Stacey, Georgi Rusev proposed to Darcey Silva.

They are engaged, for better or for worse, despite some uneasy moments and a soft breakup before her trip to Tureky.

Just two days later, the premiere of Season 2 showed Darcey in tears. It has not been an easy romance.

Viewers have picked up on a number of alarming red flags from Georgi.

Even Darcey’s harshest critics have raised questions about whether Georgi truly loves her as he claimed.

Does he have an ulterior motive? Is he just using her for fame and comfort?

When the COVID-19 pandemic struck in early 2020, Georgi of course had to quit his job.

He worked as a masseur in the DC-Maryland-Virginia area but, like so many, could not work at the time.

Georgi traveled to Connecticut with the intention of living with and proposing to Darcey.

Georgi has not worked — outside of filming for reality TV — since then, as far as anyone can tell.

While no one blames him or anyone else who lost their job to the pandemic … he has been living off of Darcey.

We’ve seen Darcey take care of his expenses, even when Georgi kept money.

Georgi stashed $1,400 in cash in a sock … something that made Darcey wonder if he was making off with her money.

A quick look at Georgi’s prices explains how he made that money.

Georgi charged $150 for a 1 hour massage and $230 for 2 hours … but does not seem to have transplanted his business to Connecticut.

So Georgi moved away from where he worked and doesn’t seem to have any plans to resume work.

And why would he?

Darcey is attending to his every need.

Georgi asked Darcey to buy him thousands of dollars in designer clothing, as viewers saw.

The kicker was that this was not just during COVID lockdown, but on Darcey and Stacey’s shared birthday.

At the time, only a few people could go into the store at a time, so he just waited for Darcey to return with his clothes.

Stacey thought that it was beyond weird for Georgi to make their birthday all about him.

The rest of the family agreed, seeing it as a red flag.

Not being employed could happen to anyone at any time. But … why go on a shopping spree with someone else’s money?

Georgi’s expensive tastes may be explained by his ex-wife, Octavia.

She warned Darcey that she met him when they were both using a “Sugar Mama” website.

Octavia told her that Georgi will always be closed off as he is now, and advised her to leave him.

Georgi has denied this, but … what is that worth, exactly?

Meanwhile, Darcey and Stacey’s friend Debbie says that Georgi has labeled Darcey and everyone in her orbit as “American Trash.”

His plan, rumor has it, is to stick with Darcey until the money runs out … and then ghost.

That said … maybe there’s another side to Georgi.

After all, we recently saw his conversation with Jesse Meester end with Georgi dissing Jesse and actively defending Darcey.