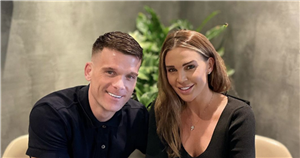 Danielle Lloyd has announced she is pregnant with her fifth child, and will "keep trying" if her next born is not a girl.

The 37 year old is already mother to four sons; Archie, 10, Harry, nine, and George, seven, who she shares with ex-husband Jamie O'Hara, and Ronnie, three, with Michael O'Neill, who she married in April 2019.

Former Celebrity Big Brother star Danielle found out she was expecting her latest child in March, and has told Closer magazine: "We were both just over the moon. Please let it be a girl!"

She continued: "Michael is really hoping for a girl and the boys are desperate too – they're convinced it's a little sister.

"If it is, that little girl is going to have an army of protective big brothers throughout her life!

"I can't wait to become a family of seven. I know there's a risk it'll be another boy though – having five boys would be totally mad!

"But, of course, the main thing I want is for the baby to be healthy. And if it's not a girl – we'll just try again after!"

Danielle has previously spoken about her plans to travel abroad to have gender selection but due to travel restrictions in the wake of the coronavirus pandemic, has decided to try for her baby naturally instead.

In March, Danielle revealed how electrician Michael was left "furious" when she underwent secret eye-lift surgery and a second lift on her jawline.

She admitted she has "worries" about turning 40 in a few years time and said: "I want to look my best, and this procedure prevents things like jowls and lines, so I thought, 'Prevention is better than cure!'"

Once again speaking to Closer, she said at the time: "Michael just thought I was going out to get a beauty treatment, like getting my eyelashes done or something."

New celebrity mums and stars who are expecting

Danielle added that Michael was "furious" and told her she was beautiful without the procedure, but Danielle said it has made her feel more confident.

It came months after Danielle revealed her husband Michael had banned her from surgery after she unveiled the results of a nose job in December after jetting off to Turkey – when travel restrictions were not in place – for the op.

She said in January: "Surgery can be a slippery slope, and it can be really addictive. Michael has now put his foot down."