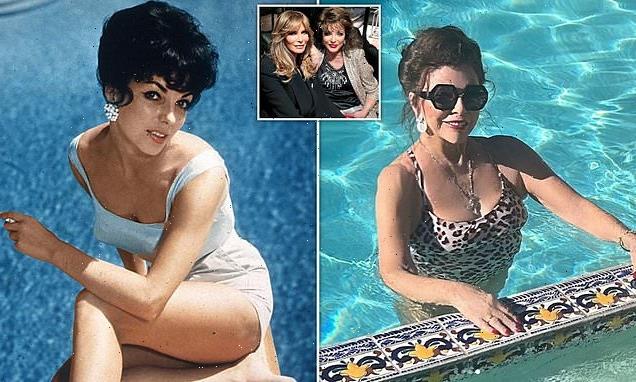 DAME JOAN COLLINS: I don’t look this good without being vain… and trolls who attack me for it are just jealous!

‘Vanity, thy name is woman!’ So goes the oft-misquoted Shakespeare line. But why not? What’s wrong with vanity? Some might say that I’m living proof.

And I believe that vanity keeps you healthy, makes you feel better and you get compliments, which is great for your mental health (although maybe not for men, since these days, sadly, telling a woman that she looks beautiful or well-dressed could get them cancelled, or worse!)

Perhaps this analogy will help those still struggling with the ‘guilt’ of being considered ‘vain’: You finally buy the car of your dreams. What do you do? You put the best petrol in the tank, you take it for regular check-ups, you maintain it, change the oil, check the tyres. You wash it, wax it and polish it.

If there are any nicks or scratches, you buff them. Treat it well and it should last a lifetime, become a classic, and be shown off at car shows. You’d be proud of it. 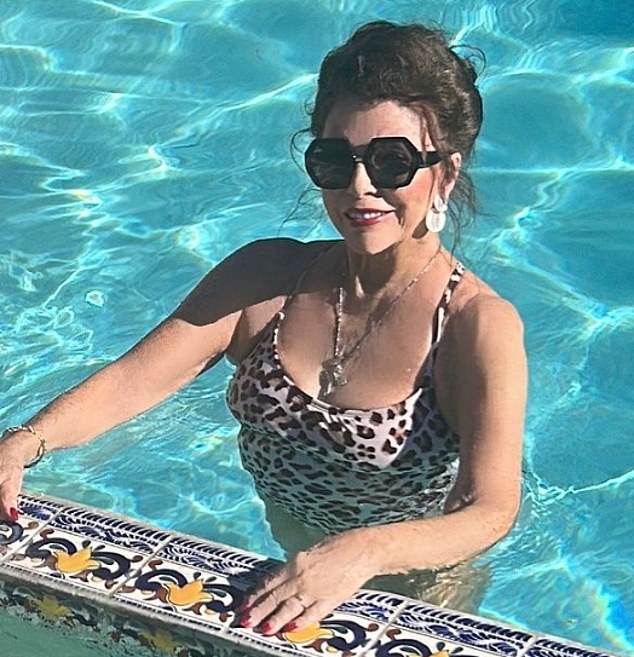 I believe that vanity keeps you healthy, makes you feel better and you get compliments, which is great for your mental health. Pictured: Dame Joan Collins 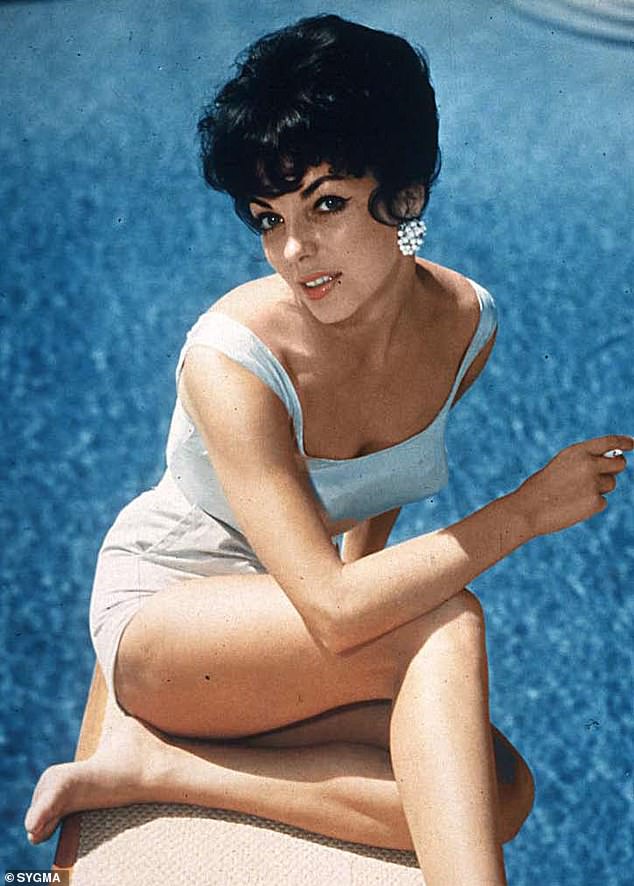 I really admire women, and men, too, who make the best of themselves, although often they are mocked. Pictured: Collins in her Hollywood starlet days

So why should not the same apply to us, our bodies and our faces?

I really admire women, and men, too, who make the best of themselves, although often they are mocked. After all, the image you portray to the world is how you feel about yourself.

And I believe that people still respect you more if you look fresh and groomed than if you act and dress like a slob. Maybe this is a non-woke opinion, but it’s mine.

I come from a family of very glamorous women — my mother, Elsa, had 11 siblings, nine of whom were female, and my father, Joe, had two extremely glamorous sisters, Pauline and Lalla.

They took extremely good care of their health, bodies and faces, and so looked lovely and much younger, even into their sixth decade. Many of their contemporaries were jealous and called them ‘vain’ and ‘narcissistic’, but they were strong women who continued to dress and groom themselves beautifully despite the criticism.

Both my mother and Aunt Lalla instilled in me the virtues of scrupulous skin care, the magic of make-up and how to make the best of yourself in every way. Following in the footsteps of the females in our family, I became a big fan of cosmetics. 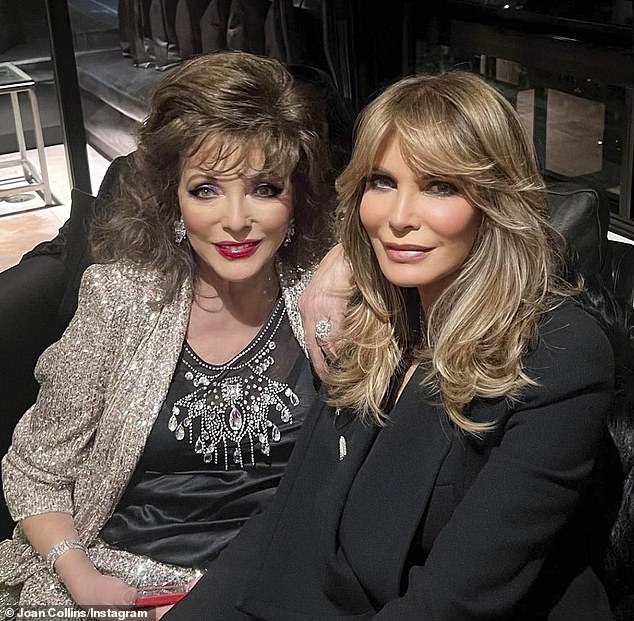 My friend Jaclyn Smith, who was, of course, a Charlie’s Angel while I starred in Dynasty, has taken care of herself, both inside and out, and looks lovely. Pictured: Collins, left, and Jaclyn Smith, right

What surprises me today is that many people think ‘a full face of make‑up’ is over the top and too much bother to apply. Indeed? Don’t men have to shave and/or trim their beards (and other assorted stray hairs)? That takes at least ten minutes, while I can throw on my everyday ‘full face’ in about five.

We thespians call it ‘slap’ because we just slap on the foundation (which must be liquid, so it covers the complexion faster). I add lipstick (which I am never without), a dash of eyeshadow (I’ve stopped using mascara, as I just don’t like it and I can achieve the same effect with pencil and eyeshadow), throw on the sunglasses, and voila! I’m ready.

Elizabeth Taylor once told me that she often lingered at her dressing table for hours. ‘I’m daydreaming!’ she laughed, ‘Marilyn does it, too, you know.’

For dinners and events, of course, I usually spend at least 20 minutes applying my ‘full face’, with a bit of daydreaming thrown in. 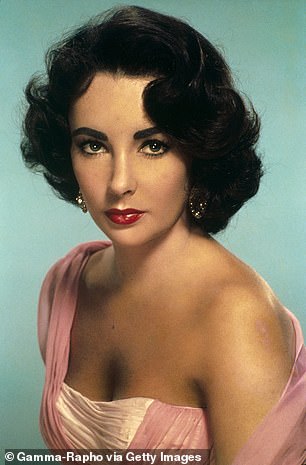 I respect women who choose to look their age, and I’m not trying to hide mine by wearing make-up. I just like to look as good as I can. And make-up has protective qualities. It shields us from the ageing effects of the sun and from pollution.

Some, quite a bit younger than me, look as if they have suffered the wear and tear of life on their faces and bodies. They haven’t taken care of themselves, and it’s sad to see.

By contrast my friend Jaclyn Smith, who was, of course, a Charlie’s Angel while I starred in Dynasty, has taken care of herself, both inside and out, and looks lovely — something immediately apparent when I saw her at a Christmas party a few weeks ago.

But look after yourself at your peril, lest you are called vain! Indeed, some people deride the desire to look and feel as good as possible, whatever your age. Several remarks I’ve received on social media have been unkind and often rude about my ‘vanity’. But maybe there is a touch of the ‘green-eyed monster’ there?

There’s a school of thought that believes it’s shallow to care about your appearance, and that you should do better things with your life.

And yet I take every day as an adventure in which I try to achieve something, learn something and enjoy something.

I’ve raised three children as a single mother, while appearing in almost 100 films, hundreds of TV shows, written 18 books and supported countless charities. I think I’ve done better things, as well as looking after my looks.

Anyway, is it vain to care about your insides, which, of course, influence how your outside appears, too?

When I was growing up, Mummy was a martinet about ‘clean eating’, which was unknown in the mid-20th century. This consisted of masses of fresh green vegetables, fruit, fresh milk, healthy roast chicken, and sauteed liver and even offal (yes, I know!) which I hated but was told it was ‘good for you’. And, of course, fresh fish at least once a week.

Added to this were the daily supplements which the government stipulated all children had to be given: spoonfuls of cod liver oil (ugh!); Virol, a thick brown liquid malt extract containing bone marrow which was supposed to help us grow strong; and a thick orange extract which, when added to water, tasted like something the dishes had been washed in.

But we Blitz babies dutifully took it and became a healthy bunch. Wartime rationing has been hailed as producing the healthiest generation in Britain. 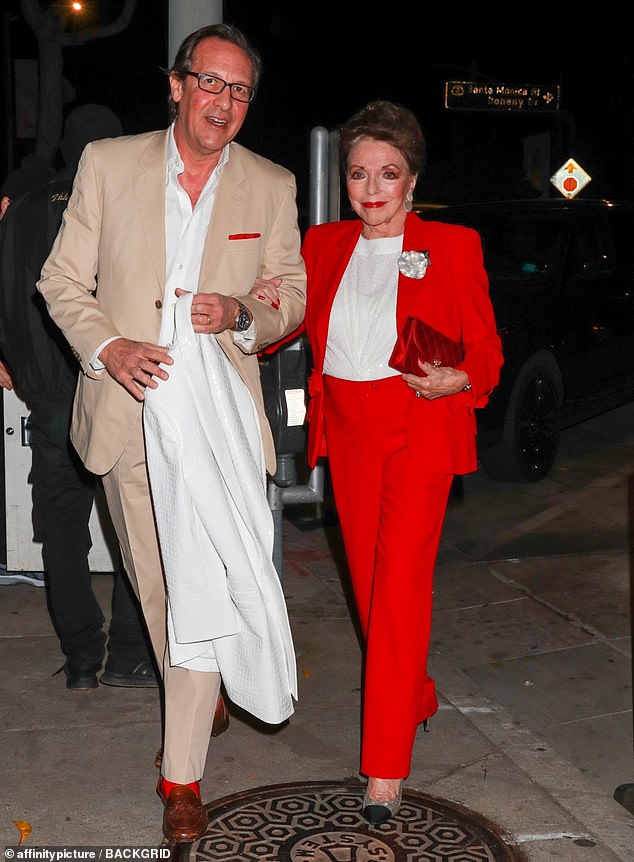 There’s a school of thought that believes it’s shallow to care about your appearance, and that you should do better things with your life. Pictured: Collins steps out for a dinner date the night after Christmas in Los Angeles

We were not allowed many sweets or chocolates (bad for you), and as for ice cream, that was a treat and only on a rare weekend when Daddy would drive us to the seaside for healthy fresh air and long walks.

For the occasion, Mummy would dress beautifully and appropriately, and always wore make-up: foundation, powder, lipstick and mascara, which came in a little black box with a brush that she had to spit into and rub against the black paste before applying.

I found that quite revolting, but loved her skin care regime, which I followed, of course. Because Mother knows best.

One of her many rules: make-up must be removed every night with cotton wool and thick white cold cream, then night cream must be applied. Mummy also danced a lot and exercised her lower body and legs on a towel on the living room floor. She had such good legs that her friends called her ‘Marlene’, after Dietrich. So, I started exercising, too, and have stuck to it all my life.

Of course, this all took a certain amount of time, which some people sneeringly called a ‘waste of’. But I’ve always believed the end justifies the means and these simple rules really did pay off.

There were moments when it could all have gone wrong, for my looks and my health.

When I went to Hollywood, I was a healthy 9 st, 20-year-old contract starlet. But ‘she’s too fat’ screamed the studio bosses.

They insisted I started taking diet pills and lose those pounds within two weeks.

I was horrified, as I was a girl who liked her food. Their diet consisted of bananas and milk, or cottage cheese and tomatoes, with the occasional half a can of tuna fish, and as many cigarettes as I could smoke.

I have to say the pills worked — I was never hungry, and boy, was I a ball of energy! When I look at pictures of myself then, it’s amazing to see my tiny waist.

But the cost was high. These pills were amphetamines. When a friend realised I was becoming hooked, they threw them all in the bin with strict instructions never to take them again.

In retrospect, I could have become a pill popper or drug addict, as sadly so many stars did. Think Judy Garland, Michael Jackson, even Matthew Perry.

As the decades passed, I remained content with the way my face looked. Although I was called conceited, I was proud of my appearance and that, in some way, I had managed to cheat time.

However, it was also annoying that I would get nasty remarks. ‘Joan Collins is vain and narcissistic’, ‘Her face is fake, it’s all make-up and Botox, which she can afford.’

Neither statement is true. Not for me lifts, tweaks, fat injections and Botox, just plain old common sense, staying out of the sun, and make-up.

Nowadays, some girls attempt to look like reality stars, influencers, and pop artists, but they don’t have the same glamour as the stars I used to idolise: Ava Gardner, Hedy Lamarr and Elizabeth Taylor, who were other-worldly gorgeous.

These stars of yore had the faces they were born with. Facelifts were dangerous, and the panoply of ‘treatments’ available these days did not exist then. Today, instead of having a ‘face full of make-up’, some opt for a face full of fillers.

Not that I deride plastic surgery or the various nips and tweaks available these days. ‘The plain woman’s revenge’ is what I call it, but I don’t feel there’s anything wrong with that.

I believe in making the best of yourself. And if it makes you feel good about yourself, then go ahead. But proceed with caution. Surgery can be addictive, and some people go too far.

I also think it’s important to dress as well as you can. It surprises me that with the masses of well-made but low-priced clothes in the shops, people seem to like to dress exactly alike — tight jeans, trainers and baggy sweaters or jackets are the norm.

Anyone who doesn’t conform to this ‘dressing down’ image is liable to receive sarcastic, condescending or patronising remarks.

‘Oh! You’re so dressed up!’ I have been told many times, when I am just in an outfit that is co-ordinated, or when my husband is wearing a suit and tie.

I think it’s sad that so many people feel dressing up is somehow narcissistic. It isn’t. It’s all part of having the self-esteem that comes from having a little bit of vanity.

My hobby is drawing and designing clothes and practically all my evening gowns and day dresses are products of my imagination. It’s not vanity; it’s variety. I don’t want to look like a cookie from the same cutter.

In a world where obesity seems to be celebrated, thinness derided and glamour considered old-fashioned, I think we should all celebrate having a little bit of vanity — and being happy with however we look.