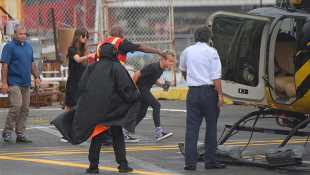 Dakota Johnson had a fun day out in NYC with Chris Martin’s son Moses, even taking to the sky for a helicopter ride together.

As if you need more proof that Chris Martin and Dakota Johnson were going strong after those passionate makeout pics, here’s another example that they’re totally in love. Dakota took Chris’ 13-year-old son, Moses Martin, for a ride in a private helicopter. Dakota, 29, was spotted escorting her boyfriend’s son to the helipad in New York City on August 8, placing a protective hand on his back to make sure he didn’t hit his head on the door while hopping into the chopper. Moses looked totally stoked for their trip, which didn’t include his dad. It’s unclear if they were just taking a spin around Manhattan or traveling somewhere outside the five boroughs.

Earlier that day, Dakota and Moses were photographed picking up juice, which Moses was seen clutching as he got into the helicopter. Chris and Moses have escorted Dakota around New York City for several days as she hit The Tonight Show and other late night appearances to discuss her new film with Shia LaBeouf, The Peanut Butter Falcon. Sure, her fans are excited to see her on the big screen again, but they focused on one thing during her interview with Jimmy Fallon: the fact that she got the gap in her front teeth fixed! As one fan eloquently put it, her tooth gap is “gone, but never forgotten”

Something more shocking: Chris and Dakota, who have dated for two years, took a detour to the Hamptons to double date on the beach with his ex-wife, Gwyneth Paltrow, and her new husband, Brad Falchuk. We know that Chris and Gwen are the friendliest of exes, but it’s still shocking to see how well the two couples get along!

That Hamptons trip, which included plenty of PDA on Chris and Dakota’s part, proved that they’re definitely still together. The couple was plagued by breakup rumors for months, but it’s clear that’s not the case.