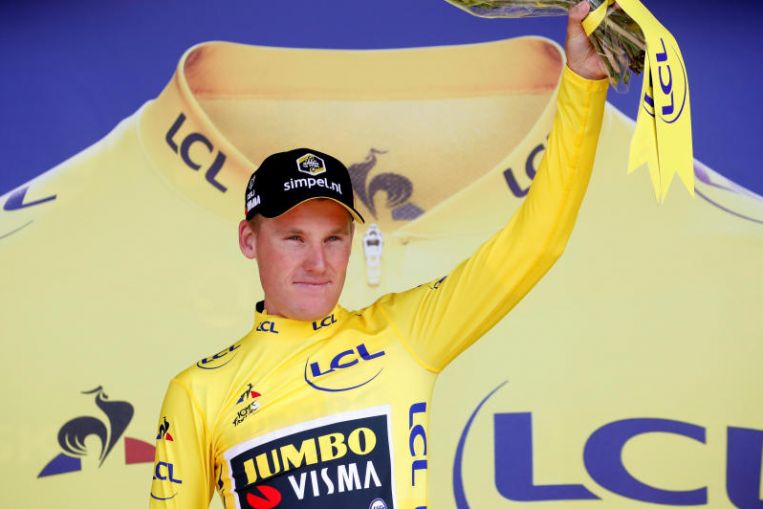 There had been concerns about defending champion Geraint Thomas’ form after his fall on Saturday, but Ineos were the best of the rest and put some time into all their key rivals.

Teunissen extended his overnight lead when his team beat Thomas’ Ineos, with the next five teams all grouped within a handful of seconds.

Ineos were the first down the ramp and set a pulsating time, holding on to their lead until Jumbo, last off the blocks, smashed 20 seconds off the British team.

“We did try to win it,” said a breathless 33-year-old Thomas.

“It was a pretty decent time,” the Welshman added at the finish line at the giant Brussels Atomium, built for the 1958 World Fair.

“I was pretty sore hitting the barriers yesterday, so the good news (is) I’m totally fine.” Adam Yates’ Mitchelton Scott had mixed fortunes as the team lost 21sec to Ineos but his twin Simon trailed home more than three minutes adrift.

Saturday’s surprise winner Teunissen then not only keeps his overnight lead, but moves further clear of his rivals from other teams.

“But here we are again, I hope I get more sleep and I think I can keep hold of the jersey again tomorrow,” said Teunissen.

“Today all eight of our riders win,” said the 26-year-old, who described having the yellow jersey as “life changing”.

In even more good news for Jumbo breakout star Wout van Aert took the best young rider’s white jersey as he continued to impress since his conversion from cyclocross.

“It’s good for me, good for Belgium and just great for Mike, who is much better than people have been giving him credit for,” said van Aert.

Nobody thought we could do it

Denmark’s Jakob Fuglsang, who was left battered and bleeding from the head after a high-speed fall on Saturday, looked strained as his Astana team lost 20 seconds to his Tour de France title rivals Thomas and the Colombian Egan Bernal.

Another rider who will go back to the team hotel happy is French climber Thibaut Pinot, as his FDJ outfit stunned everyone except themselves by dropping just 12 seconds to Ineos.

“That was exactly what we wanted, we worked really well (together). No-one thought we could do it, but we knew,” said the glowing Frenchman.

The other notable French climber Romain Bardet had a poor day however, down in 19th.

“It seemed quite easy so thanks to the whole team. I’m feeling good after what we had expected to be a tough day,” said habitual top-10 finisher Martin.

Those looking for signs this will be an open and competitive Tour de France will see the minimal time differences between the main contenders as an indication of how tight it is.

The times for the team time trial are taken from the fourth man crossing the line, while dropped riders take their own time, as with Vuelta a Espana champion Simon Yates, who was left behind with 10km to race.