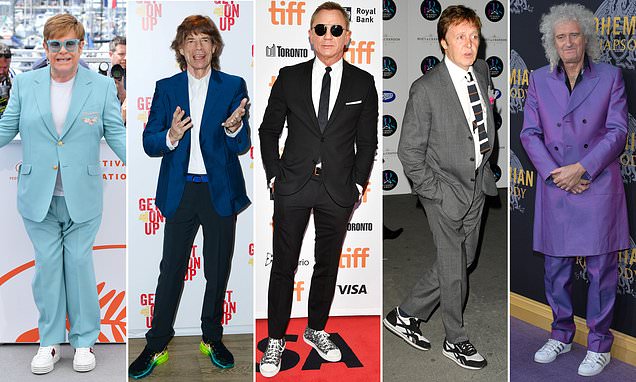 Shoe do you think you’re kidding, chaps? It’s the curse of the ageing star: Trying to be cool by matching a suit with groovy trainers. And as 007 has just proved, it’s a tough look to pull off

Adorned with their pattern of skulls and flags, paisley swirls and love hearts, you can imagine the trainers exciting the interest of a teenage girl.

These, however, are not just any old pair of sneakers. They are Saint Laurent Bedfords and — although they closely resemble a pair of £60 Converse — retailing at £510 they are beyond the pocket of most teenagers.

In this case, the wearer is 51-year-old father of two Daniel Craig, best known for playing the effortlessly suave James Bond.

Suffice to say 007 wouldn’t be seen dead in these horrors.

At a pinch, his trainers might make for a reasonable choice when Craig is popping out for a pint of milk, or relaxing on holiday. But why on earth would he wear a casual pair of sneakers with a nicely cut, formal black suit at a red-carpet film premiere?

It’s not as though Craig needs the comfort, grip or flexibility of a sports shoe, given that he is just ambling along the red carpet. He’s not about to hop onto a skateboard or wield a tennis racquet.

Sadly the answer is that — oh the indignity! — Craig has joined the ranks of those middle-aged men who have fallen for the siren call of the sneaker.

No one is suggesting that Craig swap his tailored Tom Ford suits for a pair of high-waisted slacks or plump for a comfy flannel slipper instead of a brogue, but there is something wince-making about a man old enough to be a grandfather wearing a teenager’s shoes with a suit at a formal occasion.

Don’t wear it bad! Former members of The Beatles, Sir Paul McCartney and Ringo Starr are both guilty of attempting the suit with trainers look

He’s not alone, though. Craig is one of an ever-burgeoning tribe of 50, 60 and 70-something celebrities desperate to convey the message that they’re still cool and down with the kids.

A day rarely passes in celeb-land without a picture popping up of some man-opausal star wearing the dreaded sneaker.

When not parading them with a suit on the red carpet, these men are tragically prone to sporting the laidback footwear with skinny jeans (which should only ever be worn by skinny teens).

The worst offenders go a step further and team said jeans with logo-riddled T-shirts, hoodies and baseball caps. Don’t they check themselves in the mirror before stepping in front of a camera?

Celebrity stylist Alex Longmore, whose clients include Claudia Schiffer and Jodie Kidd, says: ‘There used to be a saying that you can tell the calibre of a man by the shoes he wears, but that just isn’t true any more.

‘Wearing sneakers with a suit is a huge trend. The problem is that you have to be very careful which trainers you style with a suit.

‘I’m afraid that Daniel Craig’s are very casual, and I think his stylist has got it wrong. But trainers are absolutely the biggest thing in menswear. It has come from the street, as well as social media, and now everyone wants to have a pair of £500 trainers and they will wear them as smart shoes.’

It seems that no one is immune to the charm of a trainer. Just ask perennial suit/sneaker wearers — including Mick Jagger and Jonathan Ross. Both are clinging on to their youth more firmly than is graceful.

Jagger’s hair is still chestnut brown a couple of decades after the shade began to appear improbable, and he’s never out of trainers — on stage or off it. Ross, too, with his passion for comic books, seems stuck in a juvenile rut and, at 58, loves the trendy Japanese Bathing Ape brand, also favoured by U.S. rappers Jay Z and Kanye West. 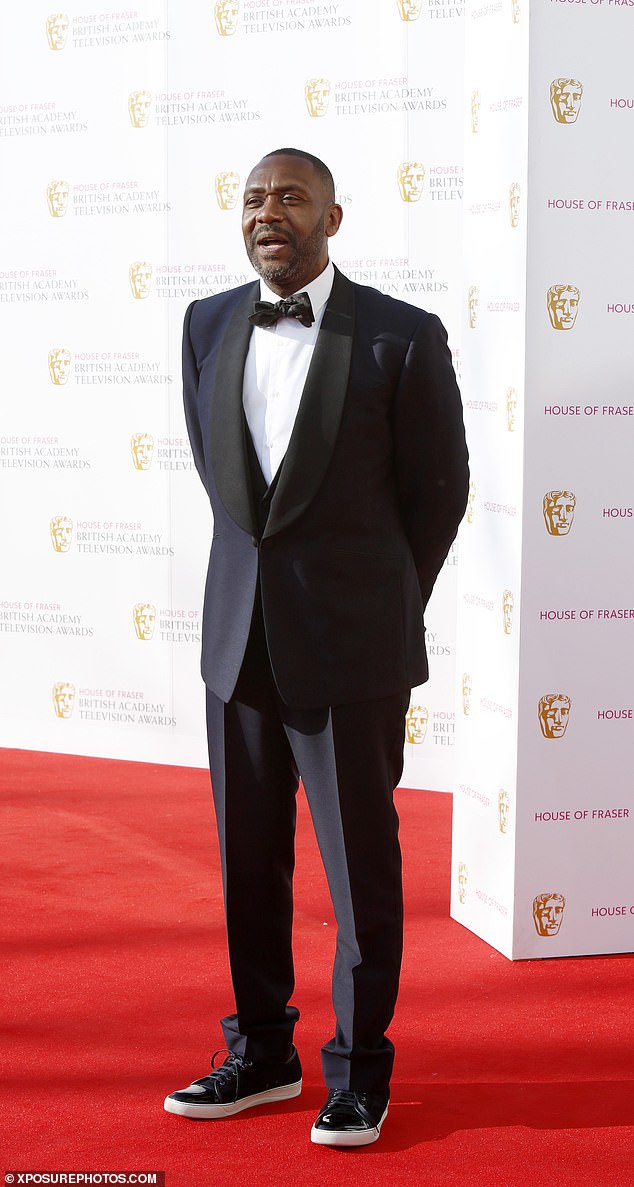 Not that the appeal of trainers isn’t understandable — they are comfortable, lightweight and provide ankle support.

Yet nothing sounds the claxon for ‘midlife crisis’ more.

Alex Longmore concurs: ‘It may be that men of a certain age love this look because it is a rebellion against the dress code. You used to have to wear a jacket and tie, and now there is this relaxed ‘media look’ of a jacket and trainers.

‘It’s comparable to the moment when jeans became acceptable as evening wear for women. The trouble is that men just pull on their regular trainers on formal occasions without asking themselves if they really work with a suit.’

Gucci also offers the metallic leather Flashtrek, with removable crystals, at £1,080. Balenciaga’s range from £550 to £750.

And that’s just how these middle-aged show-offs like it — street youth fashion with a VIP price tag.