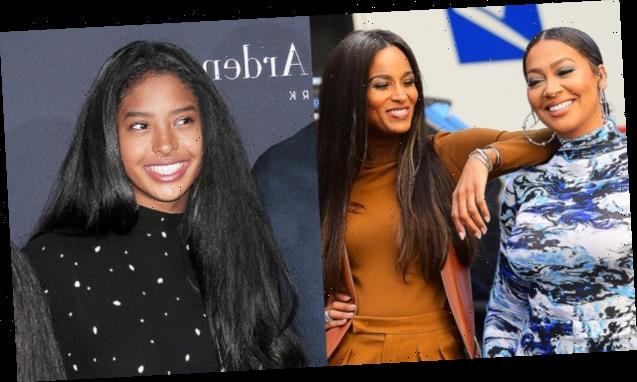 Ciara and Natalia Bryant were ready to get the ‘danger, danger’ signal from La La Anthony during a fun game of football! See the video capturing the moment!

Ciara, La La Anthony, and 17-year-old Natalia Bryant are ready for the next round of the NFL draft! In a new video Ciara posted to her Instagram account on October 1, the singer, 34, was joined by La La and their mutual pal Vanessa Bryant‘s eldest daughter, Natalia, for a game of football in one of their gorgeous, sprawling backyards! Natalia was positively beaming as she joined La La and Ciara for their huddle.

“Let’s go QB,” Ciara said to La La as she strode over. “So I’m about to go ‘danger, danger,’” the TV personality, 39, clad in a one-piece with cutouts, told Natalia and Ciara. “When I say ‘hut,’ you get that motherf—ing ball and you run!” Laughing almost uncontrollably, Ciara and Natalia ran to their respective positions on the field. It appeared that Vanessa Bryant may have been the one recording the video, panning over to her youngest, 15-month-old Capri Kobe Bryant.

Then it was game on! La La, as she instructed, yelled “danger, danger,” and soon, it was Ciara with the football in her hand running across the field and chased by other players! The edit of the clip featured the song “California Love” by Tupac Shakur and Dr. Dre, and everyone playing appeared to have a total blast. The rest of the video featured more huddles, game plays, and fun between the women, which has been in plenty supply as of late.

It appears that Vanessa is spending a lot of quality time with her gal pals La La and Ciara. On September 30, Ciara shared a very candid snap featuring herself and Vanessa breast feeding their youngsters. Ciara welcomed son Win Wilson with her Seattle Seahawks husband, Russell Wilson, on July 23, and has since been working hard and taking her own path to lose her baby weight and return to her ideal body shape!

Natalia’s spending some fun time with La La’s 13-year-old son, Kiyan Anthony. The same day that the family friends played a game of football, Kiyan and Natalia showed off their dance moves in a video Natalia shared to her own Instagram account. “Reunited with my little brother,” she captioned the clip, adding a red heart emoji. The twosome performed a choreographed dance to Ne-Yo‘s 2007 hit,  “Because Of You,” and seriously nailed it! We hope to see more fun, sweet content from the Ciara, La La, and Vanessa’s youngsters while they spend more quality time together.