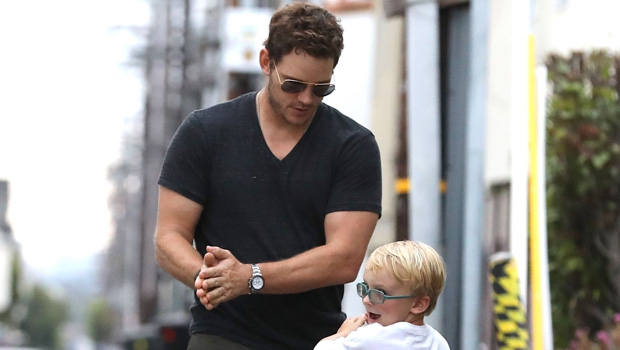 Chris Pratt and his adorable six-year-old son Jack were spotted happily waiting outside for Katherine Schwarzenegger during an ice cream run in Los Angeles on Aug. 16.

Chris Pratt, 40, showed off his amazing dad skills when he was seen having a great time playing Rock, Paper, Scissors with his six-year-old son Jack on Aug. 16! The father-son duo went to get some ice cream with Chris’ new wife Katherine Schwarzenegger, 29, in Los Angeles, CA and they played the game while waiting for her outside on the sidewalk at one point. Chris wore a black V-neck T-shirt and dark-colored pants during the outing while Jack wore a white T-shirt and black sweatpants. Katherine, who was photographed standing in the ice cream shop, wore a peach-colored cropped hoodie and light gray jeans.

Jack, who Chris shares with ex-wife Anna Faris, 42, and Katherine seem to be getting along very well since she officially became his stepmom on June 8. Before their latest outing, they were all spotted having the time of their lives at a beach in Cape Cod, MA in early July. Katherine and Jack were all smiles while frolicking in the sand and in the water while Chris couldn’t help but make funny and silly faces.

When Chris and Katherine aren’t spending time with Jack, they’ve been enjoying some alone time as newlyweds. They recently had a date night in Malibu on Aug. 13 and even shared a passionate kiss outside Mastros Ocean Club. Between their wedding and their many outings, the lovebirds have had an active summer this year and seem to be more in love than ever!

Now that Katherine is officially part of the Pratt family, we look forward to seeing more outings with her, Chris, and Jack in the future!