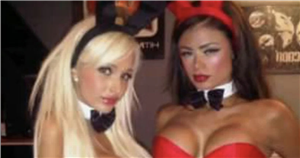 Chloe Sims has opened up on her past as a Playboy Bunny in France before signing up to star in The Only Way Is Essex.

The 38 year old, who recently sparked rumours she's dating Love Island's Jack Fincham after exchanging flirty messages on a shirtless snap, spoke out about the experience on TOWIE: The Story of…

Blonde beauty Chloe told viewers her friend first told her about the show before it had even been linked to a channel.

"My friend at the time told me they were going to make a show, like The Hills but in Essex, and she was like, ‘You’ve got to go for it’ and I was like, 'No way, I can’t do that', at that point I was scared about things like that," she said.

“So I had my meeting with them and it went well, I’d had a few glasses of wine so I was drunk and a bit loose lipped and they said, ‘Right, can you send us a weekly blog of what you get up to, any dates, anything funny, anything goes wrong, just send it to us.’”

While the producers for TOWIE went away to get the show signed off and attached to a channel, Chloe got a job as a Playboy Bunny and would travel to places she "couldn't afford" within France.

By the time TOWIE got back in touch, Chloe, who recently shared a simple and cheap hair hack for making a ponytail look more voluminous, admitted she'd "kind of forgotten about that and was loving my life as a Playboy Bunny.

"I was rocking on in like Cannes and St. Tropez, places I couldn’t afford to be! It was amazing."

However, she soon realised she would have missed an opportunity if she didn't take the job to be on TOWIE as she went on: "I was in Luton Airport, and all of the magazines were full of TOWIE, and I thought, ‘F**k, what have I done?’

TOWIE stars: Past and present

"Then one day I got a phone call and they said that TOWIE was trying to get hold of me, and asked if they could forward on my number.

"I said yeah and was hoping that maybe they wanted to bring me on, and it was, they were contacting everyone that didn’t take the part in the first series and asked me if I was interested."

Clearly ecstatic by the offer, Chloe said: "Hell yes!" and she's now one of the longest standing members of the programme.