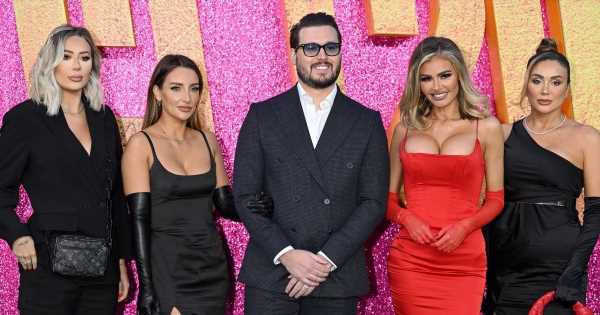 Chloe Sims wowed on the red carpet for the London premiere of The Lost City on Thursday evening.

The 40-year-old put on a stunning display as she attended the red carpet of the upcoming film, which includes stars Brad Pitt, Sandra Bullock, Daniel Radcliffe, and Channing Tatum.

The TOWIE star swooned the crowd with a busty display in a tight-fitting red corset dress alongside her siblings Charlie Sims, Demi Sims, Frankie Sims, and her brother's fiancé Georgia Shults.

The star, who is now founder and director of a group called Huge Project, looked smitten as his wife-to-be Georgia, 30, hung off his arm.

She looked confident alongside her future in-laws as she donned a black slit dress, black quilted bag, black leather gloves, and fine jewellery.

Whereas, sister Demi, 25, opted for a black-suited co-ord with silver jewellery, a chained designer bag, and snazzy black sneakers with a hint of lime.

Frankie, 26, looked stunning with her hair in a chic up-do to draw attention to her one-shoulder dress accompanied by shining jewellery.

Completing the look, the star carried a red quilted back and peep-toe black heels.

Following the screening, the group took to the streets of Mayfair for a night out on the town as they were glammed up in their party gear.

Chloe kept warm in a red trench coat as she was snapped alongside Demi arm in arm.

The star seemed to be in good spirits, following recent reports that she has 'cut ties' with her ex, Pete Wicks.

After choosing to unfollow her co-star on Instagram and remove photos of the pair, Chloe assured new! magazine in a recent interview that there wasn't a "nasty" movie.

"I’ve had Pete muted for a long time and I just didn’t want to have him on there any more,” she explained.

During her chat with new! the star refused to confirm whether she was dating anyone at the moment.

However, she opened up about the difficulties of dating as a single parent.

Chloe explained: "I haven’t had that many serious relationships. When Mady was little you could get away with it as you could just say people were a friend.

"I tend to keep her out of my private life. If I was in a serious relationship, I don’t think I would rush that, as she is used to having me all to herself.

"I would have to tread carefully and it would be a gentle process."

For more celebrity updates, sign up to our daily OK! newsletter.