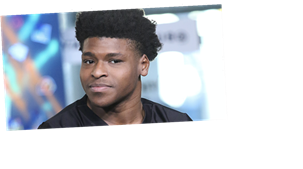 The 21-year-old was charged in Chicago on Thursday, People reports. In a statement, federal officials said Harris is being charged "for allegedly enticing an underage boy to produce sexually explicit videos and photos of himself.”

According to said statement, Harris “contacted the underage boy on a social media application and repeatedly enticed him to produce sexually explicit videos and photographs of himself and send them to Harris, according to a criminal complaint filed in U.S. District Court in Chicago. The minor victim informed Harris during their initial online encounter that he was 13 years old, the complaint states.”

This charge carries a minimum sentence of 15 years in prison and a maximum of 30 years.

Harris made news earlier this week when two underage twin boys filed a suit against him for allegedly asking that they send them nude photos when they were 13 years old. A representative for Harris disputed the claims telling People, "We categorically dispute the claims made against Jerry Harris, which are alleged to have occurred when he was a teenager. We are confident that when the investigation is completed the true facts will be revealed."