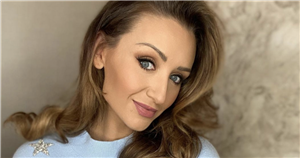 Catherine Tyldesley is said to have claimed £50,000 from the government furlough scheme, it has been reported.

The former Coronation Street actress, 37, is said to have claimed from the scheme to help prop up her production company Dreambig.

According to the Daily Star, Companies House accounts are said to show the company had £23,000 in cash deposits.

Actress Catherine and husband Tom Pitfield, who own the company together, are said to have bolstered the business with up to £50,000 from December to April this year.

Like many businesses, Catherine is entitled to claim money from the furlough scheme on behalf of her business.

Throughout the pandemic, former soap star Catherine has continued to appear on TV.

She appeared in drama miniseries Viewpoint, which aired on ITV in April.

Catherine returned to ITV this week in the new culinary challenge show Cooking with the Stars.

She is the latest amongst a number of celebrities who have claimed money from the UK furlough scheme.

Tom and Giovanna Fletcher recently admitted to a "huge error of judgement" after it was revealed they had used the furlough scheme.

In a statement on their social media pages, the pair responded to reports they had used the furlough scheme after Giovanna won I'm A Celebrity… Get Me Out Of Here!

It read: "It was a huge error of judgement and a mistake we wholeheartedly take responsibility for and we have paid the full amount back. Gi and Tom x".

After facing intense backlash from the public, the mum-of-four decided to do a U-turn and restore all those concerned back to their former positions, and insisted that the welfare of her team "means everything to me".

Speaking to The Guardian, Victoria said: "We will not now be drawing on the government furlough scheme."

It comes as TaxPayers Alliance's John O'Connell suggested some business owners should set an example by paying the money back.

He said: "It is understandable that some businesses furloughed staff given the unprecedented circumstances of the past year.

"However, covid had a massive impact upon the economy and now every penny really does count.

"Some businesses have repaid the support offered to them by taxpayers.

"They should serve as an example for other firms that have come through the past year in rude health.

"Taxpayers will likely have long memories of those that helped in the national effort and those that didn’t."

For the latest on Catherine Tyldesley and much more, sign up to OK!'s daily newsletter