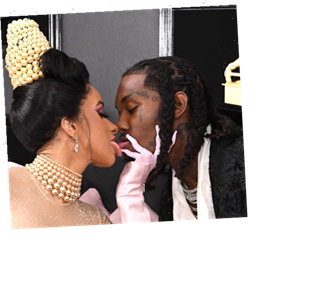 Even though Cardi B is divorcing Offset and trying to keep things “amicable,” that may be difficult to do.

Rumors are circulating that Offset knocked up a side piece … giving Kulture an unplanned half-sibling.

Just days ago, Cardi B and Offset began the process of getting divorced, though it is believed that they had already quietly separated.

After three years of marriage and having a child together, this came as a bit of a surprise.

The reports that Cardi is ditching Offset because he cheated on her, on the other hand, are the opposite of shocking.

Rumors about an alleged lovechild playing a role in all of this have been vague at best.

But it’s no surprise to see them crop up, because Offset has cheated on Cardi befre — like, a lot.

What would make things different this time? Well, if he took his betrayal one step further by fathering a child. That, even for Cardi, could be the last straw.

However, those in Cardi’s camp have reached out to Page Six to shut down these claims of Offset’s cheating bearing fruit.

“There is no other child,” the insider insists.

The source emphasizes that there is “No baby is on the way.”

“That rumor is super false,” the insider reiterates.

The source also shed light on the rapper’s state of mind.

Sorry, on the beloved rapper’s state of mind, not on Offset’s.

“Cardi is thinking of her child,” the insider affirms.

“And,” the source adds, “wants everything to be amicable.”

If that sounds surprising given Cardi’s reputation from her behavior just a few years ago, well, that’s to be expected.

“She’s evolved over the years,” the insider characterizes, “and continues to.”

Once upon a time, Cardi was yeeting shoes at rival rappers and was even accused of ordering violence against Offset’s alleged side pieces.

That was years ago, however, and it sounds like she has taken several chill pills.

As we previously reported, Cardi is adamant that this divorce remain amicable from start to finish.

Cardi wants to guarantee that she and Offset will share joint custody of their precious two-year-old daughter, Kulture.

Notably, Cardi is not seeking spousal support or child support. And while the initial petition read that she was seeking primary custody, she had those documents amended.

Cardi’s intentions are said to be for her and Offset to share custody and to peacefully co-parent.

To further avoid any contentious elements in the divorce, she is not looking for financial support from Offset.

When you have an estimated net worth to the tune of $26 million and a strong desire to play nice, it can be easy to not ask for any cash. Many divorcing parents do not have that luxury.

It’s not even clear if Offset was cheating this time, or if that cheating — if it took place — was behind their breakup.

It may be that their romance was dying out, as often happens when a couple who gets together in a passionate rush experiences the passage of time.

Love can burn hot at the start and then fizzle out. Then the relationship slowly collapses, like a flan in a cupboard.

19 Most Expensive Celebrity Divorces Ever: Where Does Jeff Bezos Rank?Start Gallery