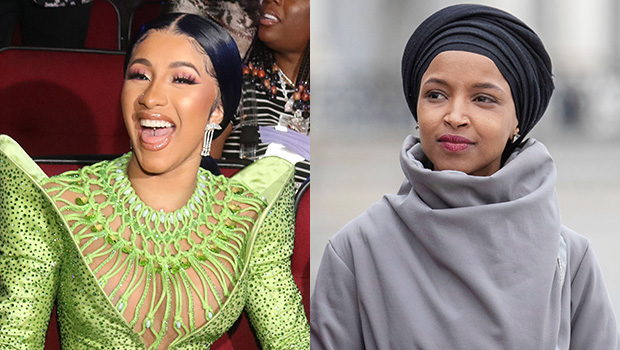 U.S. Rep. Ilhan Omar has Cardi B’s support after Trump rally-goers chanted ‘send her back.’ She brought up an amazing lyric from Beyonce’s ‘Formation’ to let Omar know to stay strong.

Cardi B was just as disgusted as most Americans when a crowd at a Donald Trump rally in N.C. started chanting “Send her back” when the 73-year-old brought up U.S. Rep. Ilhan Omar’s name.  The 37-year-old congresswoman from Minnesota was born in Somalia but became a U.S. citizen. She’s also one of four female WOC congresswomen now known as “The Squad” that Trump to “go back” to “the totally broken and crime infested” countries, even though they’re all American citizens (all but Omar were born in the U.S.). Cardi is now using a Beyonce lyric to let Omar know that she’s the one with the power by everybody talking about her.

Hours after the rally, Cardi, 26, posted a smiling photo of Omar to her Instagram page and in the caption wrote “You know you that bitch when you cause all this conversation 💁🏽‍♀️” That’s a powerful lyric from Beyonce’s 2016 song “Formation.”  Cardi’s fans agreed, with comments such as. “Crowd chanting send her back was really disgusting sometimes America ain’t sh*t sometimes we shine bright today was not one of those days 🤦🏾‍♀️.”

“U speaking truth here!,” “Facts” “Exactly” were other comments users left. “Facts, she’s bold & very strong!🙌👏❤️😍,’ one person wrote about Omar while another said “Yesss, we stand with all the women Trump has put down.” “She’s a bad ass woman! All 4 of them!👏👏👏” a user wrote about The Squad while another person glowed about “I LOVE HOW CARDI SPEAKS ON WORLD ISSUES 👏🏾” Cardi has never been afraid to step into political issues, even chiming in with her concern about the federal government shutdown in Jan. of 2019.

Trump has been raging a war of words against four female Democratic women of color congresswomen, with Omar, New York’s Alexandra Ocasio-Cortez, 29, Illinois’ Ayanna Pressley, 45, and Michigan’s Rashida Tlaib, 42, who were at center of his “go back” to their countries comment. On July 15 he doubled down on them by tweeting “We all know that AOC and this crowd are a bunch of Communists, they hate Israel, they hate our own Country. They are Anti-Semitic, they are Anti-America, we don’t need to know anything about them personally, talk about their policies.”