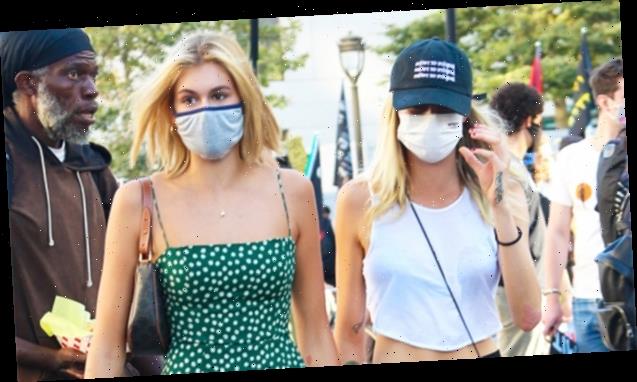 Model besties Cara Delevingne, 27, and Kaia Gerber, 18, got super cozy in a new snap! The stunning models posed-up all snuggled into a cardigan that appeared to be from Taylor Swift‘s, 30, new line of merchandise for her latest album, folklore! The two models looked super cute while they goofed around in the garment, inspired by Taylor’s track from the album, featuring the pair in one of their closets with one arm each through the sleeve of the comfy, button-up sweater!

The two ladies brought out their best pouts for the pic as Kaia snapped the mirror selfie. It was such an adorable moment between the two besties, who have come up in the modeling industry together! It’s clear, too, just how supportive the two are of their gal pal Taylor, whose eighth studio album released at midnight on July 24.

More recently, Kaia and Cara were spotted out in Los Angeles for a July 15 Black Lives Matter protest. While attending the vital cause and standing in solidarity with the movement, the two women held hands and cuddled close, all while wearing the proper face masks. You can see a photo of the two at the event below.

It shouldn’t be a complete shock to fans that the two models showed some love to Taylor with this new snap. Cara and Taylor have actually been pals for quite some time. As a member of Taylor’s squad, Cara appeared in the 2015 music video for Taylor’s song “Bad Blood,” featured on the album 1989, which released in 2014. Cara was in good company, too, appearing alongside Zendaya, Ellie Goulding, Gigi Hadid and more!

Even Kaia’s famous mom appeared in the music! That’s right, legendary model Cindy Crawford got in on the action by appearing as the Headmistress in the visual accompaniment to Taylor’s chart-topping tune. At the time, Kaia would have only been about 13 years old, compared to Taylor’s 25 and Cara’s 22. So it’s really no wonder that Kaia hadn’t made her debut amongst the squad. But now, these women are incredibly tight, and we love to see them showing love to one another!