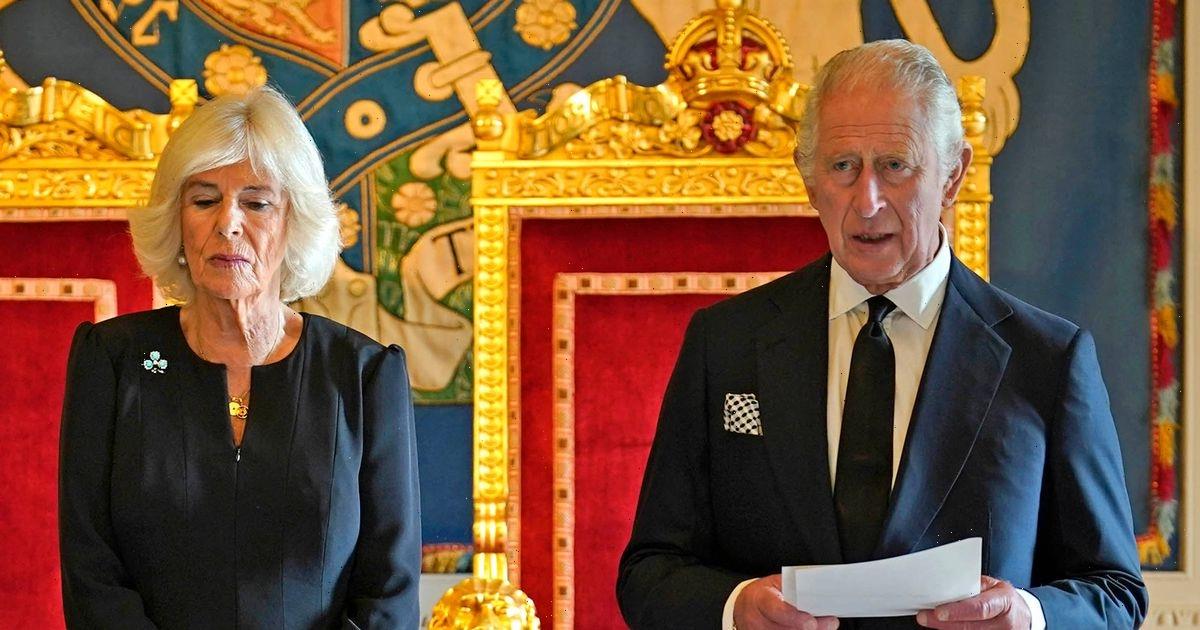 The Queen Consorthas made a sweet tribute to her late mother-in-law as she joined the royal family toreceive her coffin at Buckingham Palace .

Camilla made a statement with her choice of jewellery, wearing a brooch that held special significance to the lateQueen .

Dressed in traditional mourning black, the 75 year old wore a diamond and turquoise shamrock brooch, which is thought to have special ties to the late monarch.

It boasts a shamrock design, with three diamond leaves. Persian turquoise gems are set into the centre of each of the leaves.

While the origin of this brooch isn’t fully confirmed, a brooch matching this description appears on the list of Queen Elizabeth's wedding gifts.

The late Queen married her husband the lateDuke of Edinburghon 20 November 1947, on this occasion she was gifted a shamrock brooch by the Dowager Duchess of Portland.

The new Queen Consort was seen sporting the broochas she visited Northern Ireland , alongside her husband King Charles.

The new monarch is touring the four nations prior to the Queen’s funeral, and is expected to visit Wales in the coming days.

It’s unclear when exactly Camilla inherited this brooch from her mother-in-law, but she has been seen wearing it on other notable occasions.

These included a previous Northern Ireland tour in March, and for the 2014 funeral of the Dowager Duchess of Devonshire.

She chose to wear the brooch again last night as she joined other royals includingPrince William ,Prince Harry , thePrincess of Wales , and theDuchess of Sussexto receive the late Queen’s coffin.

The Queen's coffin will today be moved to Westminster Hall, where it will lie-in-state until Monday 19 September, and hundreds of thousands, if not millions, of mourners are expected to come to pay their respects to the late Queen Elizabeth II.

Today at 2:22pm, a procession will take place from Buckingham Palace to Westminster Hall, carrying the late Queen's coffin.

The King, his sons William and Harry, and his siblings theDuke of York , thePrincess Royaland Earl of Wessex will follow the coffin on foot.

The Queen Consort , Princess of Wales,Countess of Wessexand Duchess of Sussex will travel behind in a car.

The procession is set to arrive at Westminster Hall at 3pm and a service lasting around 20 minutes will be led by the Archbishop of Canterbury accompanied by the Dean of Westminster.

This 100 page tribute looks back at the life of our most beloved monarch, Queen Elizabeth II, marking key events during her remarkable 70-year reign, as well as her childhood as a young princess, her enduring love for Prince Philip and her family, and the lasting legacy she leaves our nation.

This edition is available to buy in stores now or it can be purchased online here.

Senior royals are also expected to pay tribute to Her Majesty, standing guard around the coffin for the Vigil of the Princes.

The lying in state opens to the public at 5pm and will be accessible 24 hours a day.