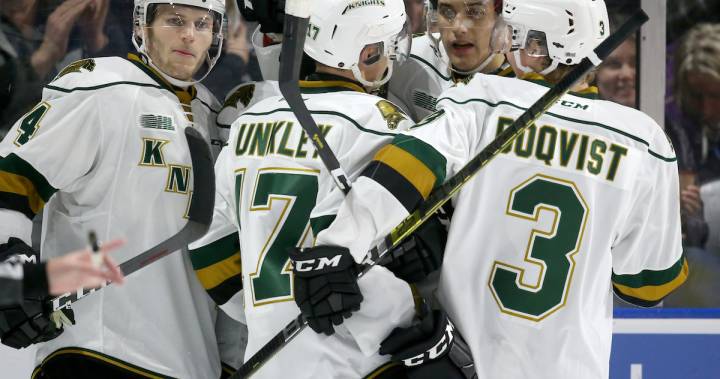 Don’t go thinking that temperatures in the upper 20s will keep the London Knights away from the hockey rink.

All three were brought aboard in different ways, but each of them could make an impact on the club as early as the 2019-2020 season.

Skinner is the oldest of the trio. He was chosen in the fifth round of the 2017 OHL Priority Selection with the 97th pick and has spent the majority of the past two seasons in the United States Hockey League. Skinner is a 6′ 3′, 174-lbs defenceman from Pinckney, Mich., who was selected by the New York Rangers in the fourth round of the NHL Entry Draft in June. He is a player who takes care of his own end but has shown the ability to add a little offence in his time with both the Lincoln Stars and the Muskegon Lumberjacks of the USHL. He is an excellent all-around athlete.

The Knights drafted Brochu in the sixth round of the 2018 OHL Priority Selection. He is a goalie from Tilbury, Ont. who played for the Dresden Jr. Kings last year as a 16-year-old where he was named the Rookie of the Year in the PJCHL. He posted a 2.46 goals-against average and a .915 save percentage in 38 appearances and impressed the Knights staff at their development camp in April.

Steklov was London’s lone pick in the 2018 Canadian Hockey league Import Draft in June. He is a 6′ 4″ defenceman from Estonia who Knights Associate General Manager Rob Simpson had very positive things to say about following his selection.

Steklov is eligible for the 2020 NHL Entry Draft and is set to join Matvey Guskov as the Knights two import picks in 2019-20.

London is expected to open training camp during the final week of August and will play their first pre-season game on August 30 against Sarnia at 7:30 at Budweiser Gardens. The Knights will be in Sarnia on August 31 and will then round out their exhibition schedule with two games against the Erie Otters.

Connor McMichael of the Knights has also been added to Hockey Canada’s National Junior Development Camp roster. McMichael was selected by the Washington Capitals in round one of the NHL Entry Draft. Liam Foudy of the Knights and Londoner Ryan Suzuki of the Barrie Colts will also attend the camp.