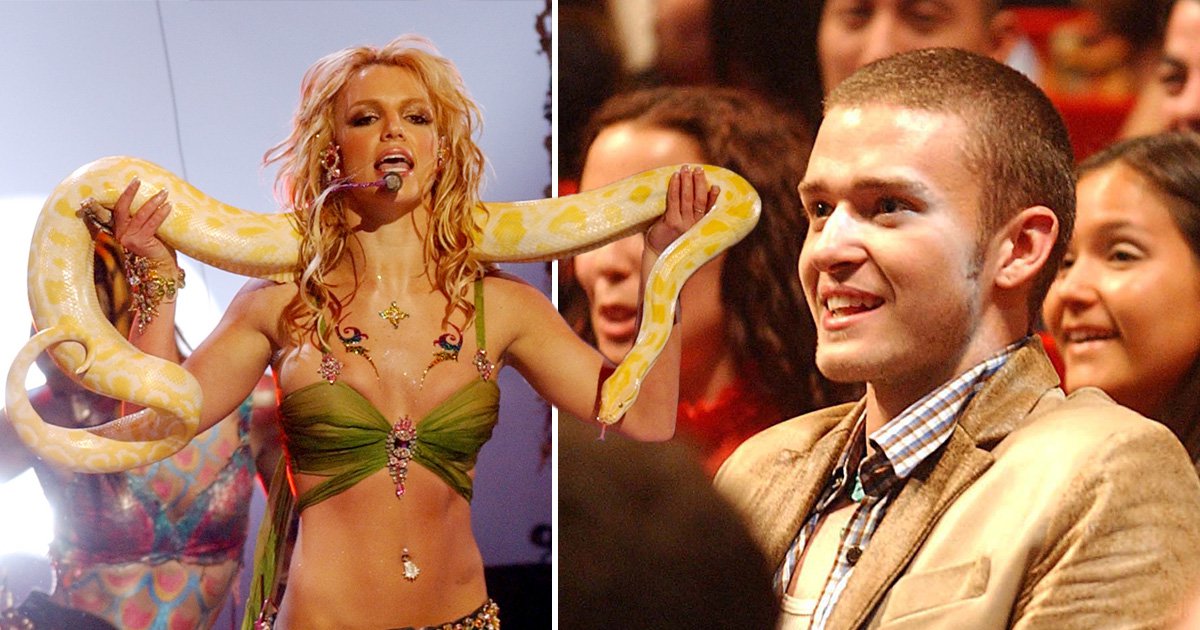 Ahead of that now-iconic MTV Video Music Awards performance in 2001, turns out Britney Spears was a right bundle of nerves.

After all, she was about to drape a big ol’ 7ft albino Burmese python around her shoulders and get into a cage with a live tiger.

The star shared a brilliant behind-the-scenes insight into her legendary performance of I’m A Slave 4 U, which has gone down in history, overnight, revealing then-boyfriend Justin Timberlake was forced to give her a pep talk before she went on stage.

Sharing a series of photos of herself with Sir Mick Jagger ahead of the event, Britney, who was wearing a similarly iconic black, lace dress, mused on meeting Sir Mick, wearing the outfit, and taking to the stage, in a lengthy Instagram caption.

She wrote: ‘Geez … this is me before my VMAs performance with @MickJagger 20 years ago !!!! This is one my my favorite dresses I’ve ever worn 👗 and it’s simple black lace !!!!

‘I will tell you this … before I went on that night I was feeling kinda out of body with nerves … I mean … I was in a cage with a live tiger 🦁😳 !!!!! I will never forget the moment before I went in the cage !!!!

Britney and Justin had a high-profile relationship in the late 90s before their split in 2002, with the NSync star recently sharing ‘love and support’ to Britney amid her conservatorship battle, saying he hopes she is soon free to live however she wants to.

The star’s momentous throwback comes amid her battle to end her 13-year conservatorship, which will be covered in another documentary, set to air on Netflix.

Netflix dropped a blistering trailer for the documentary earlier this week, which promises to leave no secret or lie unturned.

Britney herself has slammed similar documentaries chronicling the pop icon’s high profile legal battle to remove her father Jamie Spears as her co-conservator, and following the latest trailer her fiancé Sam Asghari reached out to Netflix.

Commenting on the service’s Instagram post promoting the trailer, he wrote: ‘I hope the profit from these docs go towards fighting [against] injustice #freebritney.’

In the meantime, we’ll always have this legendary performance.