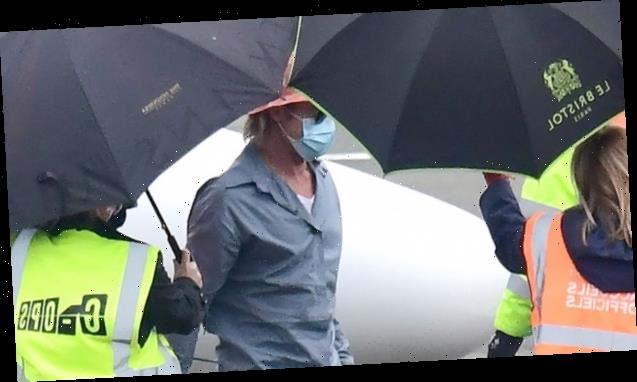 So long, City of Lights! Brad Pitt, 56, was seen leaving France on Sunday, August 30, where he did his best to remain incognito amid him being an international superstar and all. The Oscar winner dressed in the most casual of manners during his time overseas where he rocked a blue button down over a white t-shirt with green pants while adding a pop of bright color to his ensemble with an orange fedora. He also sported a generic face mask to help prevent the spread of COVID-19 as he exited the often visited country.

Nicole Poturalski, the German model who he was seen with in France a couple of days before, was not with him as he was leaving. She has become the name on everyone’s lips since then where eagle-eyed fans are wondering what the status of their relationship really is. Brad has been linked to several other women since his split from ex Angelina Jolie nearly four years ago including Charlize Theron and Sienna Miller.

The 27-year-old has developed quite a name for herself compared to Angelina, Charlize and Sienna. She’s already graced the pages of legendary fashion magazines like Elle and Harper’s Bazaar while also developing a massive following on social media. Nicole is a mom as well to an adorable son who she has gushed about on her Instagram in the past.

But wait, what does Angelina, 45, feel about all this news about Brad and Nicole? “Angelina cares who Brad is dating if it will affect their kids but other than that she has no interest in knowing about his love life,” a HL source revealed EXCLUSIVELY while adding, “She is long past having any kind of romantic feelings for Brad so on that level it’s a non-issue.”

The Girl, Interrupted star has been spotted out with her kids over the past week amid Brad spending time with Nicole. She and their six kids (Maddox, 19, Pax, 16, Zahara, 15, Shiloh, 14, and twins Vivienne and Knox, 12) headed out for a night on the town at celeb hotspot Nobu on Thursday, August 27, where the proud mama stunned in a long nude colored silk dress.