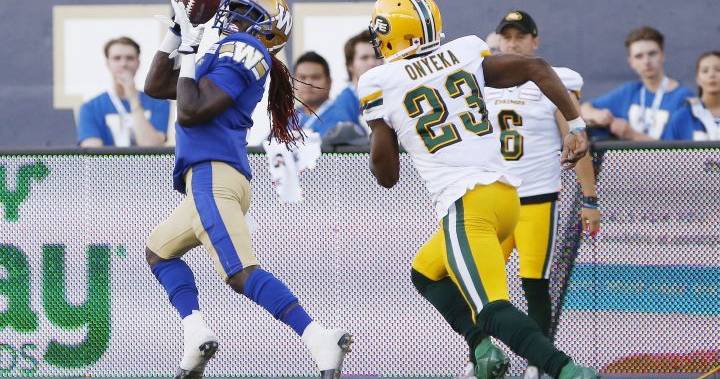 Lucky Whitehead caught a pair of touchdowns to help the Winnipeg Blue Bombers win their first home-opener in five seasons with a 28-21 victory over the Edmonton Eskimos on Thursday.

Matt Nichols threw touchdown passes of 75 and 41 yards to Whitehead, who showcased his speed and elusive skills in front of 25,336 fans at IG Field.

Sean Whyte’s seven field goals, ranging from 10 to 45 yards, accounted for all of Edmonton’s (2-1) scoring.

Nichols completed 13 of 21 pass attempts for 200 yards with three TDs and one interception. Trevor Harris was 35-of-54 for 345 yards with no TDs and no picks.

Listen below: Trevor Harris speaks after Eskimos lose to Bombers on Thursday night.

Demski did all the heavy lifting for Winnipeg’s first touchdown. He deked and cut his way across and down the field for a 35-yard gain and then capped it off with a seven-yard run into the end zone at 8:29 of the first quarter.

Nichols flung the ball to Whitehead on the first play of their next possession. He got behind coverage, hauled the ball in and ran another 39 yards to tally a 75-yard TD with under a minute left in the opening quarter. The speedster played 30 games with the NFL’s Dallas Cowboys in 2015 and 2016.

Whyte had all the scoring in the second quarter, connecting on a trio of field goals, two after Winnipeg turnovers.

Watch below: Some videos from Global News’ coverage of the Edmonton Eskimos in 2019

He was good on a 20-yarder at 11:55 and then added another from 10 yards out after Harris fumbled the ball and the Eskimos took over at Winnipeg’s 20-yard line.

Nichols had a pass tipped and the ball went into the hands of defensive back Brian Walker. The turnover resulted in Whyte booting a 45-yard field goal as time expired in the first half.

Listen below: Brian Walker speaks after Eskimos lose to the Bombers on Thursday night.

Bombers rookie running back Brady Oliveira was carted off the field late in the second quarter after injuring a leg during a kickoff.

Winnipeg got back on track with its first possession of the second half after a successful coach’s challenge led to an Edmonton pass-interference penalty. Harris caught a five-yard TD pass at 2:20 to boost the lead 21-12.

Whitehead recorded his second TD of the game at 10:19 of the third after eluding a number of defenders as he zigged and zagged his way into the end zone.

Listen below: Jason Maas speaks after the Eskimos lose to the Bombers on Thursday night.

After Edmonton turned the ball over on downs with 1:06 remaining, Harris rushed the ball for Winnipeg and fumbled. It was recovered by Eskimos Jordan Hoover and Edmonton took over at Winnipeg’s 51-yard line.

Harris couldn’t complete the passes in a comeback attempt and the Eskimos turned the ball over again on downs with 17 seconds left.