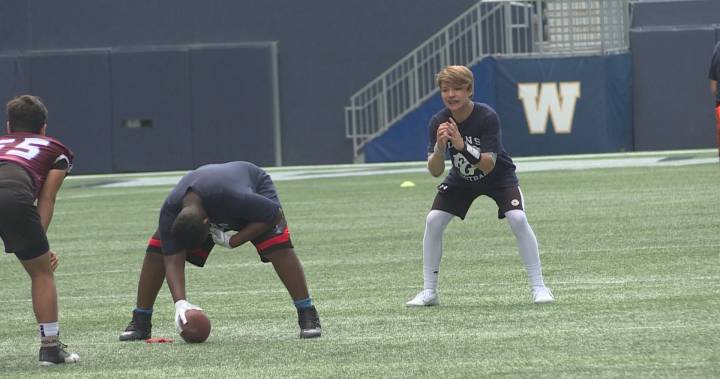 It’s an opportunity many young Winnipeg football players dream of: a chance to play on the same field as the Winnipeg Blue Bombers, and one that will soon host some NFL stars as well.

The CFL’s Bombers and the NFL’s Oakland Raiders teamed up Sunday to put on a 7-on-7 football tournament, giving kids and adults alike the opportunity to play and coach on the Bombers’ turf.

The winning team received more than just bragging rights ⁠— they would take home up to 40 tickets to the NFL pre-season game in Winnipeg on August 22.

On Ice Management Group president John Graham, one of the promoters for the Raiders-Green Bay Packers game, says the reward is a great way to motivate the players to try their best.

“The idea is to give them something that fuels their passion and to have a chance to see the Packers and the Raiders, two of the bigger brands in the game,” Graham said in a phone interview with Global News.

“We would like to thank the Oakland Raiders and On Ice Entertainment for providing this opportunity for amateur football.”