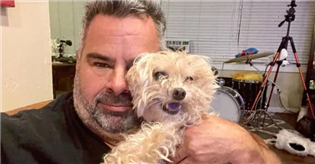 On last week’s 90 Day: The Single Life, Big Ed Brown was ghosted by his girlfriend Kaory.

He had been pushing her and pushing her outside of her comfort zone. It was enough, and viewers were happy for her.

This week struck a much sadder and more heartbreaking tone for the 56-year-old reality star.

“I’ve been back from Mexico for about two weeks,” Big Ed Brown says somberly at the beginning of Season 2, Episode 11.

It is clear that there is more weighing upon his mind than the breakup with Kaory.

“I haven’t heard from her,” he shares, before revealing a tragedy.

“Teddy passed away,” a tearful Big Ed shares on screen.

He shows the cameras his dog’s shark outfit.

“He had been sick for a while,” Ed admits. “He had been having problems with one of his arms.”

Ed shares that he had taken Teddy to the vet shortly after their return home.

The vet had checked Teddy over, but it seemed clear that he was in his final months, weeks, or even days of life.

Ed tearfully recalls Teddy’s final night, when his precious dog was restless and having labored breaths.

Ed sat by Teddy, petting him since Teddy was unwilling to go to bed like he would on a normal night.

“I probably dozed off for maybe 30 minutes,” he describes.

“I woke up,” Ed tearfully shares, “and he was gone. He was still warm.”

Ed says that he woke up and wrapped Teddy’s body in a blanket.

However, he says that as difficult as this has been, it is bittersweet.

“I feel like I have a new beginning,” he says to the cameras, resolving to move forward.

The episode then shows Ed teasing his upcoming social call, including a bouqet of flowers left by “somebody that was very special to me in my life.”

He describes how they both “reached out” and that he thinks “she’s the one.”

Despite admitting that he’s “moving sort of fast,” he doesn’t want to miss out on this chance at love.

Now, you don’t even have to watch the full episode to know what Ed means.

He is talking about Liz Woods, the woman whose life he turned upside down during Season 1.

Ed dumped Liz via text message eight times, by his own admission, in addition to being a generally lousy partner to her.

We already know from various interviews that Ed and Liz got engaged.

This episode shows that stunning twist on screen, and how it came to be.

It started with Liz learning that Teddy had passed away and reaching out to express her sympathy.

In interviews, this was described as an email exchange.

In the episode, we hear Ed describe it as a gift of mystery flowers, a mystery solved only by his front door camera.

As they spoke again, they apparently realized that they wanted to be together, despite everything.

Ed had previously stated that it was a “back together on Saturday, engaged on Sunday” situation.

This episode shows us that he wasn’t really exaggerating.