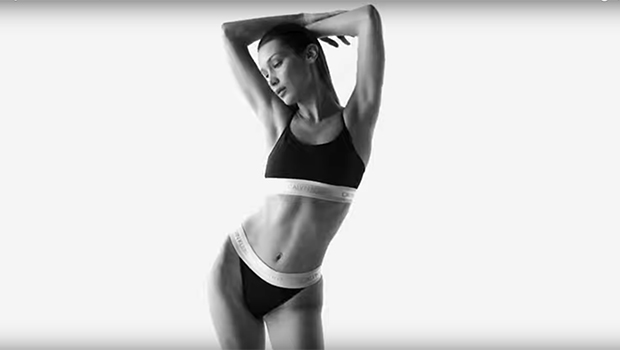 Sorry Justin Bieber, you’ve been replaced as a Calvin Klein underwear model. Bella Hadid, 22, has taken over the reigns in a sexy black bra and panties for a new campaign unveiled on Aug. 12. And she’s not alone, as supermodel Naomi Campbell, 49, NFL star Odell Beckham Jr., 26, and more celebs star in the new #MyCalvins IRL promo. Bella is seen in several different a black sports bras and undies showing off her ripped abs with the brand’s logo written in a white elastic band. She even does a cute little dance for the camera to Groove Armada‘s “I See You Baby.”

Bella’s one of the most in demand models in the world these days, but unfortunately it has taken its toll on her love life. She and The Weeknd, 29, have split up for a second time after rekindling their relationship in the summer of 2018. Their busy schedules were reportedly to blame as she travels the world with her work while he’s busy working on is fourth studio album. But family and friends think they could have a third go-around as she’s still in love with the “Starboy” singer.

As we previously told you EXCLUSIVELY, “Bella’s friends and family are not convinced they’ve seen the end of her relationship with Abel. At this point only time will tell to see where their relationship is going because they truly believe she still loves him,” a source close to the beauty told HollywoodLife.com.

“Those closest to Bella know that deep down there are still true feelings there and those feelings don’t just go away overnight. They have broken up before and it was simply due to scheduling conflicts because she’s busy, focused on her career and she’s always on the go. So only time will tell, but there’s definitely a possibility things will work themselves out at some point,” our insider added.