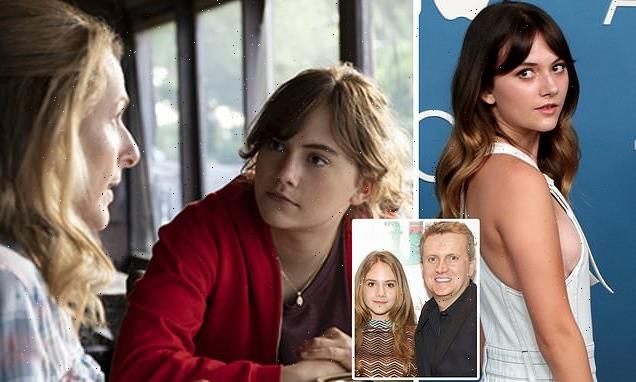 Emilia Jones was nine when she made her professional stage debut in the musical Shrek, with the show’s star Amanda Holden watching over her like a benevolent fairy godmother.

A decade on, she’s the star of a Hollywood film, giving a performance that will put her into the thick of the upcoming awards season competition.

London-born Jones appears with Oscar winner Marlee Matlin, playing her mother, in Coda — a picture that has already garnered her acclaim ahead of its opening here next week.

She plays Ruby Rossi, a teen who is the only hearing member of a deaf family.

Not only did Jones have to master American Sign Language (ASL) for the role, she also had to skipper a fishing boat — and take singing lessons. 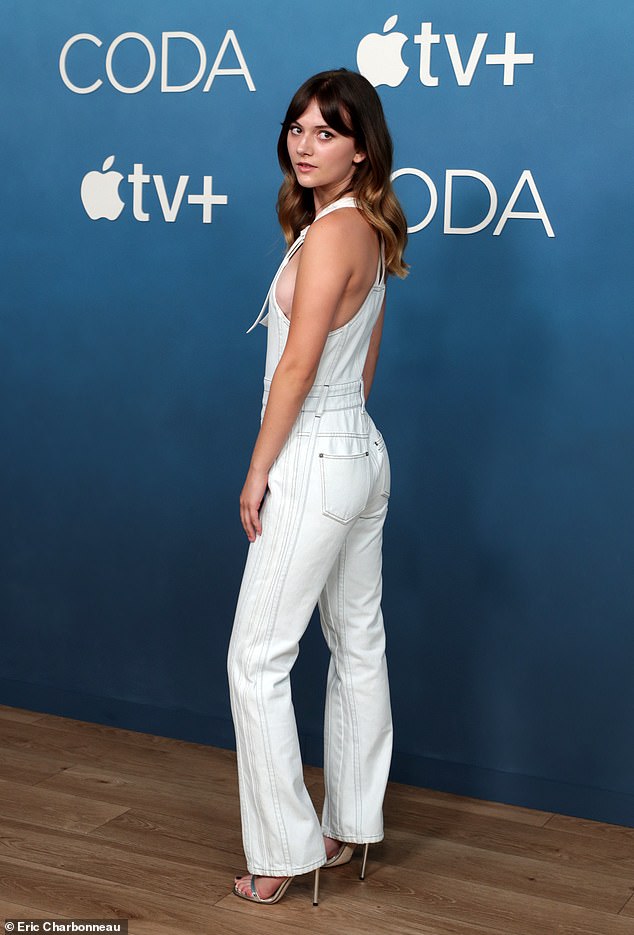 Emilia Jones (pictured this year) was nine when she made her professional stage debut in the musical Shrek, with the show’s star Amanda Holden watching over her like a benevolent fairy godmother

The first time Emilia bonded with her screen family — Matlin as mum Jackie; Troy Kotsur, playing dad Frank and Daniel Durant as brother Leo — it was on the high seas off the Massachusetts coast. At four in the morning.

‘The first time I met them was on a fishing boat,’ she told me. Director Sian Heder (co-writer and producer on Netflix hit Orange Is The New Black) was striving for authenticity and insisted her stars went and caught fish for real…at the crack of dawn.

As an animal lover, Emilia said she found the experience upsetting. ‘I’d rescue a fish and the real fishermen would turn around, shake their heads and say: “That’s money”.’

It didn’t take her long to find her sea legs, though; and soon, she was grading cod like an old hand. The crew taught her to check the lobsters, for females carrying eggs. They were thrown back into the briny, which made her happy. 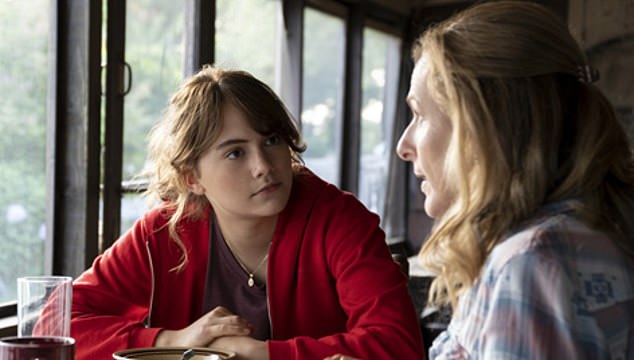 London-born Jones appears with Oscar winner Marlee Matlin, playing her mother, in Coda — a picture that has already garnered her acclaim ahead of its opening here next week

Emilia was less sure about the singing side of the role. In the film, Ruby joins the school choir club as a way of getting a breather from her family.

And while Jones can sing — ‘I sang in Shrek,’ she said; ‘I’m singing around the house, and I was in the choir at school’, she’d never had any training. ‘Which was daunting.

However, when she arrived for her first singing lesson, in between shooting Locke And Key for Netflix (she’s been filming the second and third seasons back-to-back in Canada) she was given belters by Etta James and Aretha Franklin to master. 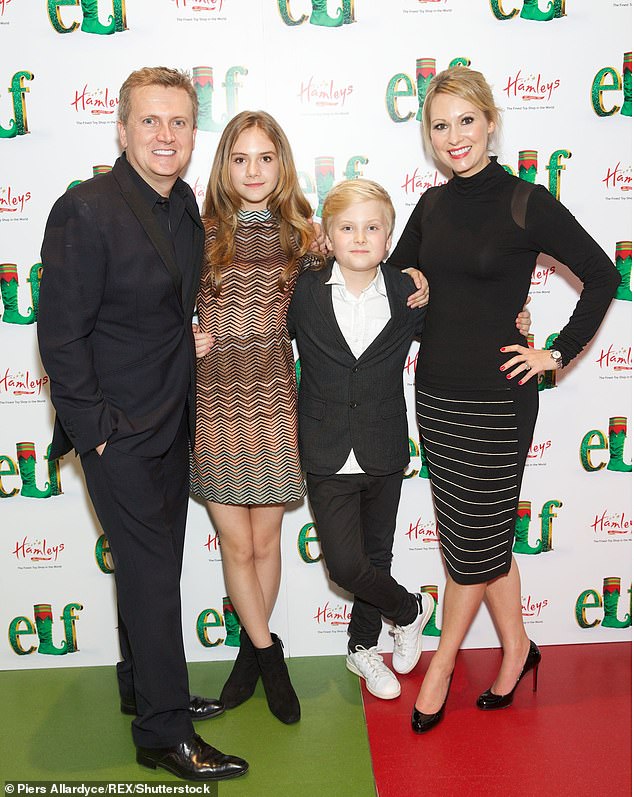 The training has certainly paid off. Jones’s portrait of a young woman trying to gain independence from a family she adores is one of the year’s best. The Sundance Film Festival awarded Coda its top prize back in January, with the judges singling out the power of Emilia’s acting for praise And it was also voted best film at Sundance Film Festival: London this week.

The film is directed by Will Sharpe, who also shares screen-writing credits with Simon Stephenson. It’s about Wain, the English artist (who died in 1939, aged 78) known for his humorous drawings and paintings of cats and kittens.

Wain had been president of the National Cat Club of Great Britain and a member of Our Dumb Friends League.

Those who have seen the picture tell me it’s terrific.

It will have its first screenings at the Telluride Film Festival and the Toronto International Film Festival, early next month, which suggest it’s going to be an awards season contender.

There are many superb moments in the picture, but the one that has stuck with me is when Ruby sings Joni Mitchell’s Both Sides Now for a university panel, and as she performs the number, begins to sign the lyrics to her family, who have crept up to the balcony to watch.

She said her dad has seen the film several times, and been moved to tears on each occasion. Her father happens to be Aled Jones, who found fame as a gifted boy soprano and later as a TV presenter, recording artist and concert performer.

But despite coming from ‘a musical household’ — during lockdown, she and her dad (once they were allowed to leave the house) went on drives ‘where we sang together’ — Emilia never considered a career in that field. ‘My heart was always in acting.’

Coda, it seems, was the first time she realised she might be able to do both. ‘I just never thought I would do a film where I would sing,’ she laughed.

Both her parents — Aled and her mum Claire Fossett Jones — are proud ‘that I took on this big film on my own’, she told me, in a video call from Los Angeles.

She reckons she inherited the strength and determination to do that from her parents. ‘My mum is quite shy but I don’t think she would ever give up on anything,’ she said. ‘She was in the circus when she was younger. She did the trapeze — she had to be strong to do that.

‘And my dad worked from an early age. We have that in common.’

Once she wraps on Locke And Key next month, she moves, almost immediately, to shooting the film adaptation of Kristen Roupenian’s short story, Cat Person. The piece went viral when it was published in The New Yorker in December 2017.

Emilia will play Margo, a 20-year-old student — ‘a very strong, confident girl…she’s pretty and she knows it’ — who becomes involved with an older man, Robert (played by Nicholas Braun — cousin Greg from Succession).

‘Cat Person touches on the grey area of consent,’ she said, adding: ‘everybody has a Cat Person story.’ Including her mother; and herself.

‘It’s different to anything I’ve done before,’ she said. ‘I think it’s exciting because as you grow from a kid, suddenly the roles get a little bit bigger and they’re more interesting — and more challenging.’

Coda will be in cinemas and on AppleTV+ from August 13.

Emma Corrin, acclaimed for her portrayal of Princess Diana in The Crown, took her final bow this week in Anna X, Joseph Charlton’s scorching play about a young woman who inveigles her way into the high stakes world of international art dealing and dot com finance.

The drama was the final part of producer Sonia Friedman’s Arts Council England-backed Re:Emerge season at the Harold Pinter Theatre.

I caught up with the show on Monday night, and not only was I gripped by director Daniel Raggett’s production, I was struck by the youthful audience. 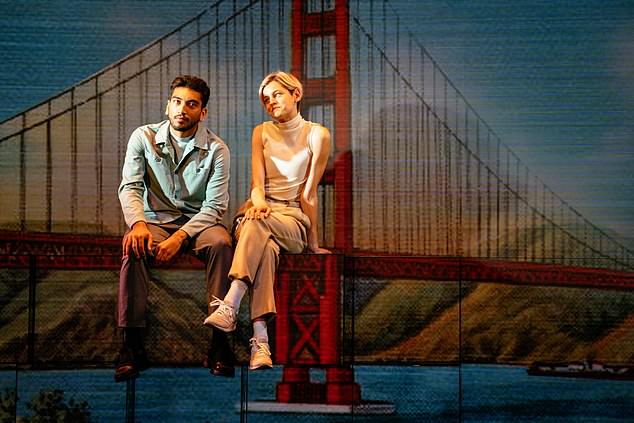 Emma Corrin, acclaimed for her portrayal of Princess Diana in The Crown, took her final bow this week in Anna X, Joseph Charlton’s scorching play about a young woman who inveigles her way into the high stakes world of international art dealing and dot com finance

‘The season played to over 90 per cent of available capacity and brought in an exciting new, diverse audience,’ Friedman, who set up Re:Emerge with director Ian Rickson, told me, adding ‘it’s essential I build on this experience and momentum’.

There are plans for Re:Emerge to, er, re-emerge with a new season of works from up and coming artists.

‘I have a gut feeling that brand new audiences and brand new artists are going to want to meet,’ Friedman said.